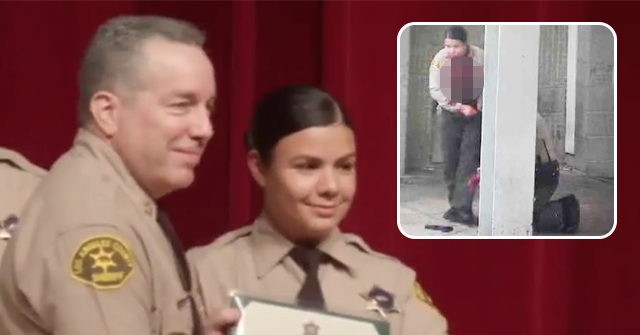 The female Los Angeles County Sheriff’s deputy who was ambushed and shot in the face on Saturday has emerged as a hero for helping her partner who was also seriously wounded during the attack, a source familiar with the incident told Breitbart News.

The 31-year-old mother was one of two officers who were both shot in the face after an assailant approached their parked cruiser in Compton and opened fire on them. Both deputies remain in critical condition and are expected to survive the horrific attack.

Breitbart News learned the identities of both officers but refrained from publishing their names. On Tuesday, Britain’s Daily Mail published the name of Claudia Apolinar, reporting she is a former librarian who had graduated the L.A. Police Academy only one year ago.

Apolinar is the mother of a six-year-old child. She sustained bullet wounds to the jaw and arms, while the other officer — a 24-year-old male, also Latino — was hit in the forehead, an arm, and a hand.

On Saturday evening, the assailant approached the deputies’ cruiser, which was stopped outside the MLK, Jr. Transit Center in Compton. The unknown gunman fired multiple rounds into the vehicle before fleeing the scene on foot.

Breitbart News learned that Apolinar stumbled out of the vehicle after being shot and then helped her partner by applying a tourniquet to his wounds. She also put out a Help Call before administering the first aid.

Video has emerged that appears to show Apolinar moving her wounded partner to safety following the attack.  The footage was posted to the official Twitter account of the LAPD Mission Station.

Talk about having the will to survive!
This female deputy is a mother, a daughter, a friend, and above all else she is a WARRIOR! She was shot multiple times during an ambush and injured. She was able to get herself and her partner to cover. pic.twitter.com/X5L9tnBUZh

“She called for help, was able to rendered [sic] aid to her partner. She remained calm & stayed vigilant! Most of all SHE NEVER GAVE UP! She & her partner are heroes,” the LAPD Mission Station tweeted.

Look at this. Stare at this. Don’t ever forget this. This is the result of a rotting culture where deranged lunatics tell our kids that the cops are the bad guys, and that the bad guys are the good guys. Something’s gotta give. pic.twitter.com/49yCk1Keie

1. Here is a photo of the female LASD Deputy after she was ambushed along with her partner while sitting in their patrol car. 1 bullet broke her jaw. Her partner was shot twice in the head. She was able to radio for help & even apply a tourniquet to her partner’s wounds. pic.twitter.com/GKH2Cbb3ve

The Daily Mail reported that Apolinar was a rookie officer who worked as an aide in the L.A. County library system from 2011 and signed up to the Sheriff’s Department in 2017.

There are currently no suspects in the case, though an arrest could come as early as this week, a source familiar with the investigation told Breitbart News. The Sheriff’s Department has put out a $ 100,000 reward for information that leads to an arrest and conviction in the case.

Officials are looking for a black male around the age of 28 to 30 years old.

‘Only in India we are liberal with health concerns’, says SC on bail plea…

Are You Ready For Your Next Trade Show?

: Bitcoin and its ‘funny business’ should be regulated globally, says European…

Battaash on target for Abbaye

From Paraguay to Italy: Development at All Costs

Gender differences in cardiovascular disease: Women are less likely to be prescribed…

7 Unusual But Effective Ways to Declutter Your Home

The Easy Part Of The Economic Recovery Might Be Over