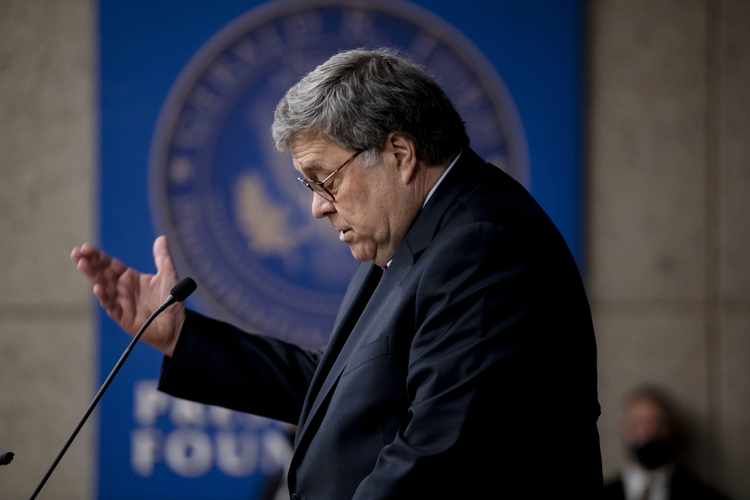 Attorney General Bill Barr ratcheted up the U.S. confrontation with China this week, accusing Hollywood and the tech industry of caving to Chinese censorship pressure in exchange for short-term profits.

“If Disney and other American corporations continue to bow to Beijing, they risk undermining both their own future competitiveness and prosperity, as well as the classical liberal order that as allowed them to thrive,” Barr said during a Thursday speech in Michigan, where he called out Apple for removing a news site from its app store in China after the government complained about it, and criticized Disney for giving Communists a role in managing Shanghai Disney.

But China hawks familiar with the finer details of U.S. labor law argue the Trump administration has the power to do far more than name and shame U.S. companies that opt to work with Beijing in order to gain access to China’s vast consumer market. The Labor Department in the next few weeks has the opportunity to cut off a main spigot of U.S. funds flowing to China by barring private U.S. retirement plans from investing in Chinese companies, an unprecedented step that would cost China billions in U.S. investment.

In fact, those advocating the bold move argue that the Labor Department has a fiduciary responsibility to do so, as well as the perfect opportunity in a pending regulation governing these investments. The Labor Department is currently finalizing changes to the regulation governing private retirement funds and could simply decide to disqualify all companies that don’t adhere to current U.S. banking and investment transparency laws, which would automatically prevent investment in Chinese companies. In late June the department released changes to the rule for “financial factors in selecting plan investments” and will finalize it in the coming weeks.

“ … It is sickening to think that American pensions and 401(k) investors are capitalizing [on] the gross abuse of helpless and oppressed Chinese religious minorities and political dissidents,” Richard Manning, a former senior Labor Department official during the Bush administration who served on Trump’s presidential transition team, recently wrote to Labor Secretary Eugene Scalia. “Americans would be appalled to learn that they were effectively providing the capital for the enslavement of their fellow man, and you can stop it.”

Manning, the president of Americans for Limited Government, cited the most recent Labor Department report on goods produced by slave and child labor, which rapped China as one of the worst abusers in the world.

“China is listed not once, not twice, but twelve times in the latest report for using children and slaves to make goods, many of which find their place on the shelves of U.S. retailers like Walmart,” he wrote. “Artificial flowers, bricks, Christmas decorations, coal, cotton, electronics, fireworks, footwear, garments, nails, textiles and toys are all listed as being made with child or slave labor in China.”

A Labor Department spokeswoman told RealClearPolitics she was looking into the matter but did not respond by late Friday afternoon.

The decision to prevent private 401(k)s and other retirements funds from investing in Chinese companies follows logically from other recent U.S. government actions aimed at countering China’s efforts to use American consumers to help it supplant the U.S. as the top economic and military superpower, Manning and other advocates argue. In June, the Pentagon determined that 20 Chinese companies are owned and controlled by the Chinese Communist Party, including Huawei Technologies Co. and Hangzhou Hikvision Technology Co., opening them up to potential U.S. sanctions. The Senate recently voted to require transparency for Chinese firms listed on U.S. exchanges, and several bipartisan bills circulating on Capitol Hill are aimed at preventing goods made by forced Chinese labor from reaching the U.S.

Earlier this month, National Security Adviser Robert C. O’Brien and Larry Kudlow, director of the National Economic Council, urged the U.S. Railroad Retirement Board to divest its roughly $ 4.5 billion in holdings in Chinese companies involved in building missiles, military aircraft and telecommunications goods the government also uses in its repression of religious minorities in China.

The three-member board is an independent federal agency that governs the retirement benefits for railroad workers, which is separate from the Thrift Saving Plan, or TSP, the main federal employee retirement plan. In May, the White House successfully lobbied the TSP, which oversees nearly $ 593 billion in funds, not to invest in an index fund that included several major Chinese companies, including several under U.S. economic sanctions.

With tensions running high between Washington and Beijing over Chinese disinformation about the origins and spread of the coronavirus, O’Brien and Kudlow argued that the investments posed a “national security risk to our country.” They also warned of grave risks to investors because the Chinese government has prevented the U.S. Securities and Exchange Commission and other U.S. oversight boards from gaining access to internal audits of companies with significant Chinese operations, even when they are listed on the U.S. exchanges. With a global backlash against Beijing over its government’s concealment of the coronavirus in the first weeks of the Wuhan-based outbreak, Chinese companies also could face more sanctions and boycotts across the world, making them financially riskier investments.

Britain earlier this week banned Huawei equipment for use in its country’s high-speed wireless network, following a similar move by the U.S. in May. And the White House in mid-July said a ban on the popular Chinese social video app TikTok could come in “weeks, not months” as concerns mount over its use of user data and surveillance.

“In light of these economic, national security and humanitarian concerns, we ask that you and your board carefully consider whether the [National Railroad Retirement Investment Trust] is currently acting as an appropriate fiduciary for those hardworking Americans and retirees the RRB serves,” O’Brien and Kudlow wrote in a July 7 letter to Erhard Chorle, who chairs the RRB.

If these Chinese investments are too risky for federal retirement accounts, the U.S. government should block private U.S. retirement portfolios from investing in them, proponents of the new restrictions argue.

“The obvious question is if these assets are too risky for inclusion in the federal TSP, why would they be allowed to be included in private 401(k) investments where the same argument directly applies?” Manning wrote. “The answer is that they are not, and under [federal law] it’s the Labor Department’s job to protect private sector retirement-specific investments or pensions from choices that are unsuitably risky.”

Opinion: The Nasdaq and the Dow are now trading in a way that was evident just before…

Your Blood Type May Affect COVID-19 Risk, But It’s No Kind of Protection,…

Robert Griffin III Says He Was Sexually Harassed BY A MAN . . . At Washington

The Margin: ‘Bulls***!’ — CNN’s Chris Cuomo gets fired up over President Trump’s Goya…