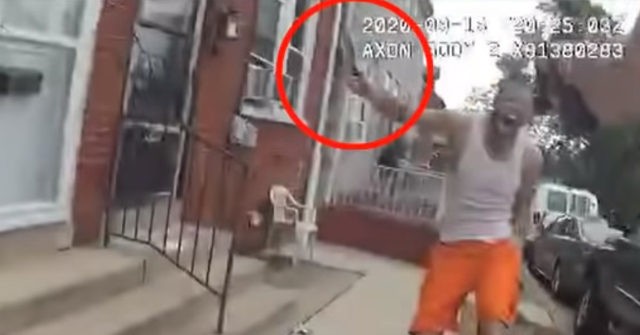 The Lancaster Bureau of Police responded to a domestic disturbance call at approximately 4:13 p.m. on Sunday afternoon, according to a statement included with bodycam footage of the shooting posted to YouTube. The caller informed emergency services that her brother, 27-year-old Ricardo Munoz, was “becoming aggressive” with his mother and was attempting to forcibly enter her home.

When officers arrived, Munoz, who reportedly stabbed four people in a fight on March 5, 2019, was waiting for them with a knife. Munoz allegedly charged the recorded officer with his weapon, and the officer opened fire as he fled. According to the statement:

The first officer on the scene walked to the front of the residence and made contact with a woman, who was identified as a family member. A male subject then exited the front door of the residence and began chasing the officer. Preliminary information and body worn camera footage indicates that the male subject had a knife in his right hand as he was chasing the officer. The officer fired several shots from his firearm, striking the subject.

The incident sparked a wave of still ongoing demonstrations, migrating from the scene of the shooting to the Lancaster Police Station. Early on, there were rumors that the victim was a 14-year-old autistic boy. It is unclear where this false information originated.

The Lancaster County District Attorney’s Office was “contacted immediately” and has opened an investigation into the shooting. In the meantime, District Attorney Heather Adams is urging locals to remain peaceful.

“A police-involved shooting has significant impact on a community, as we are seeing with the large number of individuals gathering in the streets,” Adams said Sunday night. “However, I am asking that all reaction be tempered as the investigation is ongoing.”

We Just Found Another Obstacle For Quantum Computers to Overcome – And…

Iran wants US to lift sanctions against Lebanon

Even North Korea Is Using VR & AR In The Classroom

This Startup Is Helping Grocery Stores Compete With Instacart