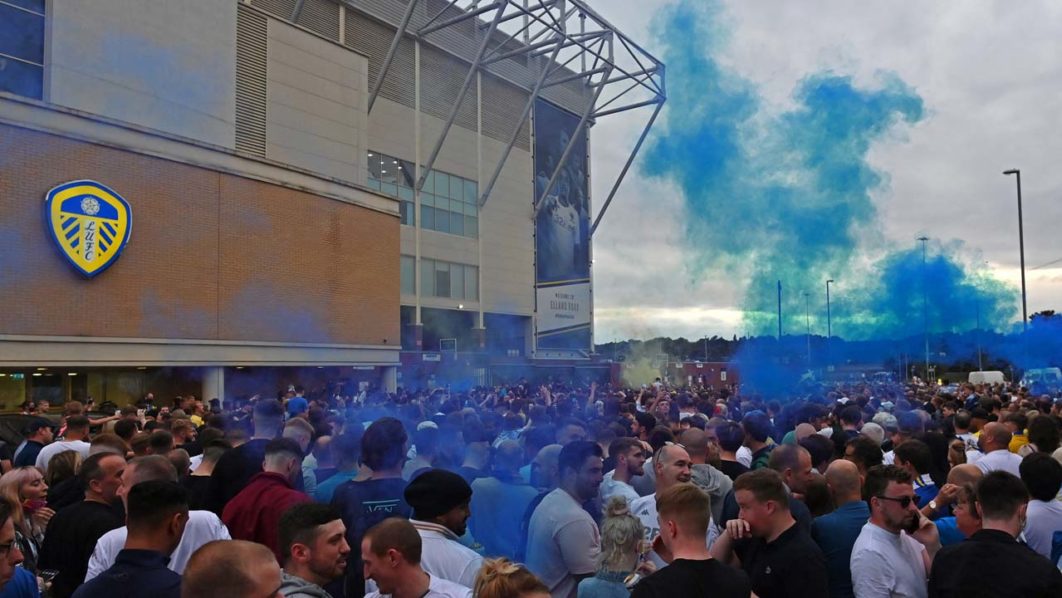 Leeds United supporters gather outside their Elland Road ground to celebrate the club’s return to the Premier League after a gap of 16 years, in Leeds, northern England on July 17, 2020. – Leeds United were promoted to the Premier League on Friday after West Bromwich Albion’s 2-1 defeat at Huddersfield ensured the Championship leaders will end their 16-year exile from the top-flight. (Photo by Paul ELLIS / AFP)

Leeds United celebrated promotion to the Premier League on Sunday with a 3-1 victory at Derby County as the Championship winners turned on the style.

Marcelo Bielsa’s side had started their promotion celebrations on Friday when second-placed West Bromwich Albion lost to Huddersfield.

Leeds were confirmed as champions on Saturday after third-placed Brentford were beaten by Stoke.

Bielsa made a host of changes in his side’s first match since they were assured of ending the club’s 16-year exile from England’s top flight.

But after Chris Martin had given Derby a second-half lead, Bielsa’s new-look side hit back through Pablo Hernandez, Jamie Shackleton and Matthew Clarke’s own goal to register their 27th league win of the season.

Leeds’ board have made it clear they want to tie Bielsa to the club with an extended contract.

When Bielsa arrived at Elland Road in 2018 his contract gave Leeds the option of extending it at the end of each season for the following three years.

But the former Marseille and Lazio boss refused to reveal his thoughts on his future.

“I don’t want to put the focus on me. Right now, it’s not the moment to talk about this,” he said.

“It’s a moment to say thanks to our players. To give this achievement to our supporters. Say thanks to the club and the authority for all they allow us to do.”

Leeds’ first trophy since 1992 is a rare piece of silverware for Bielsa, who won Olympic gold with Argentina in 2004 and a league title with Newell’s Old Boys in 1991.

“Of course the trophy makes me happy, but I’ve worked in football for 35 years and one title doesn’t change a lot,” Bielsa said.

“It really makes me happy. It’s the fact I did it with this group of players across two years. More than the capacity of this experience. Promotion was the capacity of our players.

“The capacity of the group solved every situation that happened. The prize has to be for the players.”

A stoppage-time winner from Patrick Schmidt earned Barnsley a vital 1-0 victory over Nottingham Forest at Oakwell.

They are two points behind fourth-from-bottom Charlton, who visit Leeds on Wednesday.

Barnsley faces a daunting trip to Brentford, who are still in the hunt for automatic promotion.

Fifth-placed Forest should still qualify for the play-offs as they hold a three-point lead and a superior goal difference over seventh-placed Swansea.

Univision’s Chairman To The FCC: Hurry Up And Approve Our Foreign Bailout

Sense of smell is our most rapid warning system — ScienceDaily

Pass the ‘I Am Vanessa Guillen Act’

The educational culture that is Dutch

City Council That Approved Abolishing Police: ‘Where Are the Police?’

Should we rely on the FDA for advice?

Spherical UFO plunges into the ocean in US Navy footage