Lindsey Graham: Somebody From Obama’s FBI Needs To Go To Jail 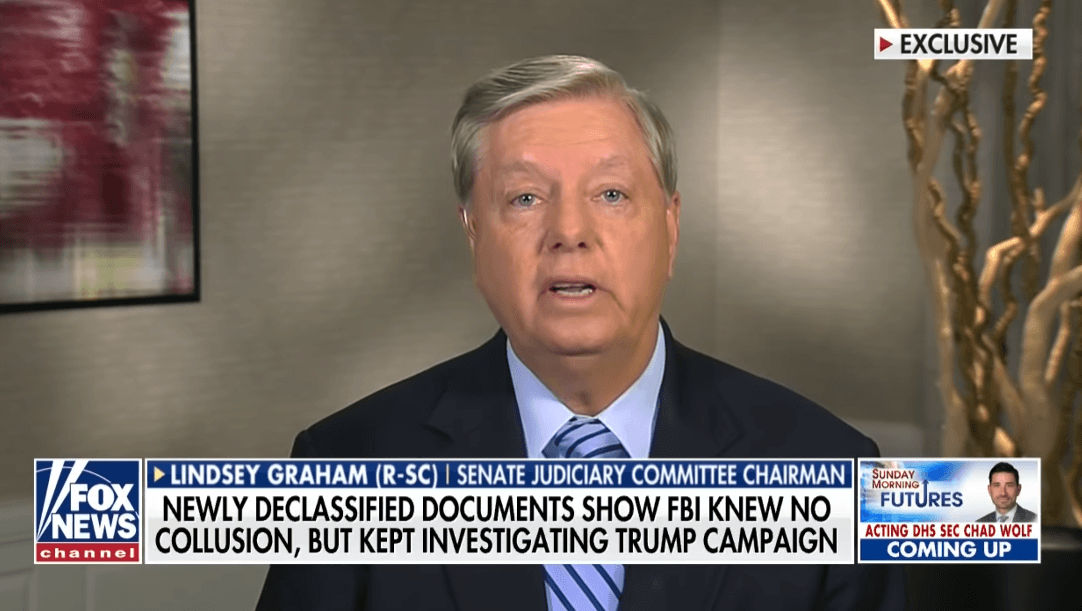 Lindsey Graham, in an interview with Fox Business Network, declared somebody needs to go to jail after the FBI lied to Congress during their investigation of the Trump campaign.

The South Carolina Republican hinted that he was about to drop some significant information about the FBI’s dogged pursuit of collusion between the President’s team and Russia, despite the lack of evidence to support their theory.

Graham told Fox Business Anchor Maria Bartiromo to “Stay tuned next week” to learn more about what he and other Senate Republicans had discovered by releasing declassified documents.

He explained that the FBI lied to the FISA courts, a well-documented fact, about the reliability of the infamous Steele dossier, as well as about the source who was American-based and “on the payroll of the Democratic Party.”

This past December, Graham slammed the FBI saying:

“What has been described as a few irregularities becomes a massive criminal conspiracy over time to defraud the FISA court, to illegally surveil an American citizen, and to keep an operation open against a sitting president of the United States, violating every norm known to the rule of law.”

It’s much worse, however, according to the Republican. And it needs to end in jail time.

RELATED: Meadows Expects Indictments From Durham Investigation Into Spying On Trump – ‘Time For People To Go To Jail’

Aside from defrauding the FISA court, Graham contends that the Obama-era FBI lied to Congress, an act that should result in a prison stay for those involved.

“When the FBI understood that the dossier was no longer reliable, they continued to use it,” he relayed. “But we also now have found — and this will come out next week — that Congress got suspicious about the Russian sub-source and the reliability of the Steele dossier and that members of Congress asked to be briefed about it.”

Graham alleges that the FBI denied to Congress that the dossier was the main source for their witch hunt, while FISA documents clearly stated otherwise.

“Somebody needs to go to jail,” he said.

“You’re going to find, not only did the FBI lie to the FISA court. They lied their ass off to the Congress.”

White House Chief of Staff Mark Meadows says more documents will be revealed that further prove the FBI illegally spied on President Trump and his associates.

“It’s time that people go to jail and people are indicted” for the Russia hoax! pic.twitter.com/3jvCFbI0MX

RELATED: Bill Barr Defends John Durham on Election Probe, Says He Will ‘Get to the Bottom of Things’

Last week, President Trump’s Chief of Staff, Mark Meadows, said he expects indictments and jail time for some following the investigation by U.S. Attorney John Durham into the origins of the Russia collusion probe.

Durham’s findings in the ongoing investigation are expected to be released soon.

“It’s all starting to come unraveled,” Meadows said, noting that the American people are expecting indictments. “It’s all unraveling. And I tell you, it’s time that people go to jail and people are indicted.”

Former FBI Director James Comey has admitted he was responsible for the department’s “sloppiness” when it came to the FISA court applications.

“Sure. I’m responsible,” Comey said in an interview with Chris Wallace. “That’s why I’m telling you, I was wrong. I was overconfident as director of our procedures, and it’s important that a leader be accountable and transparent.”

The President meanwhile has accused the Obama-era figures of far worse.

“Treason. Treason. It’s treason,” Trump told CBN News. “They’d been spying on my campaign. Turned out I was right. Let’s see what happens to them now.”

From rocks to icebergs, the natural world tends to break into cubes

Against the Odds, Some Bitcoin Traders Are Betting on a $36K Price by Year’s End

Mauritius to open for International Travel from July 15

“So many hands involved” – Phil Hay reveals the people Leeds must…

When Was This Written?

REPORT: Biden Team to Migrant Caravan: Don’t Come, You Won’t Get In…

Was the NSA Hacked? Or was this part of the Agenda?

May Give Nomination Speech From White House, Says Donald Trump