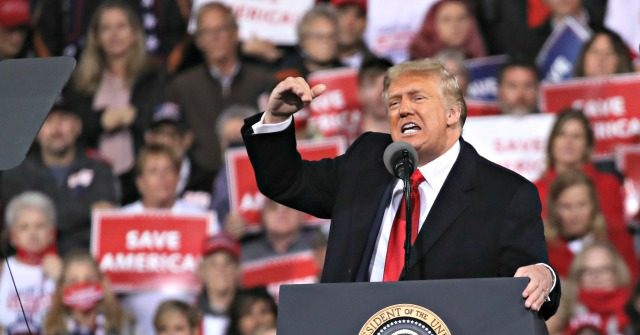 President Donald Trump will hold a Monday evening rally in Dalton, Georgia, for Republican Senators Kelly Loeffler and David Perdue ahead of Tuesday’s runoff elections that will determine control of the U.S. Senate.

8:58 PM: In a video message, Perdue, who is in quarantine, warns that if Democrats take control of government, they will pack the Supreme Court and allow illegal immigrants to vote. He says Messrs. Warnock and Ossoff will be rubber stamps for Nancy Pelosi and Chuck Schumer’s socialist agenda.

8:50 PM: The rally should be starting shortly.

Air Force One has landed at Dobbins Air Reserve Base in Marietta, #Georgia. Helicopters will take @POTUS and others who were on the plane to the rally at Dalton Regional Airport.

8:25 PM: Fearing that many pro-Trump Republicans will stay home on Tuesday, Donald Trump Jr. urged Republicans not to take their ball and go home because they are upset Trump lost Georgia.

Thousands in line now ahead of the Georgia rally with President Trump on the eve of the Senate election #Georgia #Dalton #GeorgiaRally #TrumpRally pic.twitter.com/JfwERJ0LYU

DALTON — Hello from the site of Trump’s Georgia rally tonight, where the music playing now is “Fortunate Son” and the WiFi password is pic.twitter.com/RuMvpvrSbW

Monday morning at the Dalton Municipal Airport in Georgia, where more are lining up ahead of the Trump rally tonight. Coach buses have started to arrive to shuttle in people from larger parking lots elsewhere in town #Georgia #Dalton #TrumpRally #GeorgiaElections pic.twitter.com/pt45RMeax3

Thousands in line now ahead of the Georgia rally with President Trump on the eve of the Senate election #Georgia #Dalton #GeorgiaRally #TrumpRally pic.twitter.com/JfwERJ0LYU

Amid firestorm over this Georgia call, Trump considered bailing on tonight’s rally, which could have devastated GOP chances.

But he instead intends to use the stage to go over the “real numbers” and again make his baseless election fraud claims https://t.co/spcULI67ye

President-elect Joe Biden’s competing message at a much smaller rally:

“You have two senators now who think they don’t work for you, they work for Trump,” Pres.-elect Joe Biden tells crowd in Georgia.

“I’m not asking your senators to be loyal to me. I believe they should be loyal to you.” https://t.co/iHnr5UKs6C pic.twitter.com/sORdM1tZmP

How to Share iCloud Storage with Family on iPhone & iPad

How Much Space Do You Need To Use Oculus Quest 2?

Satoshi Nakaboto: ‘US banks can now hold Bitcoin on behalf of their customers’