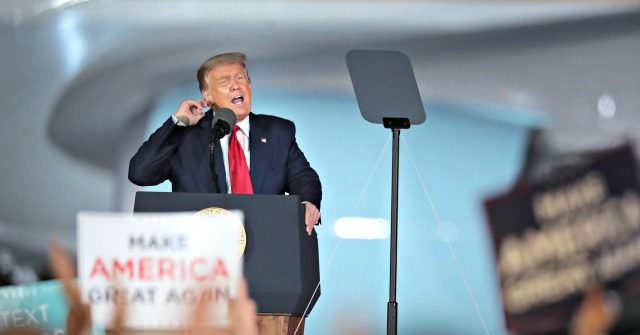 10:56 PM: Trump talks about the stock market “setting records” during a pandemic. He says there is a “headwind” on the possibility Biden wins. Trump says if Biden wins, there will be a “market crash the likes of which you’ve never seen before.”

Joe Biden’s campaign is responding to Trump holding a rally indoors tomorrow, saying, “If Donald Trump cared at all about curbing this virus and protecting the safety of his supporters, he wouldn’t hold events like this, but Trump doesn’t and he won’t.” from @MichaelJGwin pic.twitter.com/HvcJQPpeRJ

10:53 PM: Trump says he is going to California tomorrow because of the wildfires. Says he has meetings with FEMA. He says “it’s crazy what’s going on….thousands and thousands and thousands of acres. It’s crazy.” Trump was Washington is “also in big trouble” and Oregon has “never had anything like this.”

Trump says he’ll also put out the “fire” in Portland. He says “that’s a much easier fire to put out.”

Trump says White is just an “incredible guy” before asking him to stand up. Trump says White “brought along a few of his friends” (UFC fighters). He not inroduces UFC’s Colby Covington, Justin Gaethje, and Ali Abdelaziz.

10:45 PM: Trump says Republicans will take back the house “because people don’t like Nancy Pelosi.” He mocks the House Speaker, saying even the owner of the salon she frequents turned her in….Trump

10:42 PM: Trump again says the next president will have up to four Supreme Court picks. He says “if you want the Second Amendment” and “life” then “you’ve got to have the court.”

10:41 PM: Trump says a guy like Biden would “eradicate Nevada’s economy” and make it impossible for the state to compete. He says the shutdowns are “all political” and everything will open up the day after the presidential election.

10:37 PM: Trump says “America is the most exceptional nation on earth” and “our destiny is blessed by God.”

Trump rips New York Governor Andrew Cuomo for saying America was never that great before mocking his brother “Fredo” for his low ratings.

10:35 PM: Trump says the great thing about the digital age is we have everything on tape. He says he has a “Biden’s best” reel on Biden. Trump says past presidents didn’t put America first and “didn’t take care of our country.”

Trump says Biden doesn’t believe in the country before saying he doesn’t think that’s true because Biden “doesn’t have a clue.” He says the left-wing radicals who control Biden don’t believe this country because they said America, at the DNC convention, was “wicked.” He says the DNC was “the most depressing convention.”

10:32 PM: Trump says he has put a lot of money in Nevada, and it’s been a great investment. Trump says Nevada is a great place but has a “governor right now who is a political hack.”

10:31 PM: Trump says he would love to see a law that sends flag-burners to jail for a year. Trump says it’s not freedom of speech….”if you burn the flag, you should go to jail for one year.”

10:30 PM: Trump now thanks the Las Vegas Police Protection Association for their support.

10:28 PM: Trump says Harris is considered “far more liberal” than Bernie Sanders and says: “I don’t think your state is into that.”

10:27 PM: Trump says people may not like his personality before saying: “I’m what you need.” Crowd chants: “We love you! We love you!”

10:23 PM: Trump says if you are an “animal” who murders a police officer, you should get the death penalty. He also says Biden wants people like the Boston Bomber to vote after, he claims, Bernie started the movement to give prisoners the right to vote. Trump says Biden is “too weak” to be president and not smart enough as well. Trump says Biden wasn’t smart 25 years ago.

President @realDonaldTrump: If you murder a police officer, you should receive the death penalty pic.twitter.com/8Kzg38WJ37

10:18 PM: Trump says “now the gloves are off” in the presidential campaign. Like he first said last night, Trump says after Biden ran an ad claiming Trump called Americans who have served in the military losers, he can not attack Biden viciously.

Trump says “we need very sharp people” and “Joe is not qualified for this position.” He says, unlike China’s Xi and North Korea’s Kim Jong-Un, Biden isn’t “sharp.”

He says Biden’s running mate is terrible and says we’re going to have a woman president one day, but it’s not going to be her.

10:13 PM: Trump says Biden was silent the entire summer while his far-left supporters rioted and set fire to police departments and courthouses. Trump says Biden called them “peaceful protests.” Trump says Democrats control all of the cities that are having problems. Trump says these cities don’t want his help.

He now goes back to saying Biden is waging a war on the police and rips him for not mentioning law and order at his convention.

Tonight, President Donald Trump is taking reckless and selfish actions that are putting countless lives in danger here in Nevada.

Someone has set up a tripod and small handheld camera on the @CNN spot. I asked if he was affiliated with @CNN he shook his head and said no. People have turned around to yell at @CNN but that’s not them. #RJNow pic.twitter.com/3EGxsfRrjW

10:07 PM: Trump getting ready to take the stage at Xtreme Manufacturing in Henderson.

With just 15 minutes until Trump is set to take the stage in Henderson, the Biden campaign announces that Kamala Harris will travel to Las Vegas on Tuesday. pic.twitter.com/w0bNrXY8OV

Our photographer, @ellenschmidttt, tells me security at this @realDonaldTrump event is making anyone with Qanon shirts either take them off or turn them inside out before entering.

Another shot of the crowd at of now. Again, @realDonaldTrump does not speak for another 80 minutes. pic.twitter.com/vRvtv0K3f4

Here’s a shot of the crowd so far, with probably thousands still in line.

It will no doubt be standing room only.

Masks are minimal among attendees. Seats are shoulder to shoulder. We are indoors

Also, there was a noticeable absence of “Tell Me Whys” at the appropriate time. pic.twitter.com/QvIMmNDOae

Hundreds camp out in line for the @POTUS rally tonight at Xtreme Manufacturing. @reviewjournal #rjnow pic.twitter.com/njRqvvb3yc

Report: Everton keen on signing 13-goal marksman; he asked not to start his club’s last game

How to Log Out of Your Mac Using Terminal

Forget DCL: “Really top” Everton dynamo who had 71 touches was the real…

MUST-SEE: Lara Trump Lays Out the Process Next Week to Cast Aside the Fraudulent…

Politics Podcast: Why Progressives Have Struggled In The NYC Mayoral Race