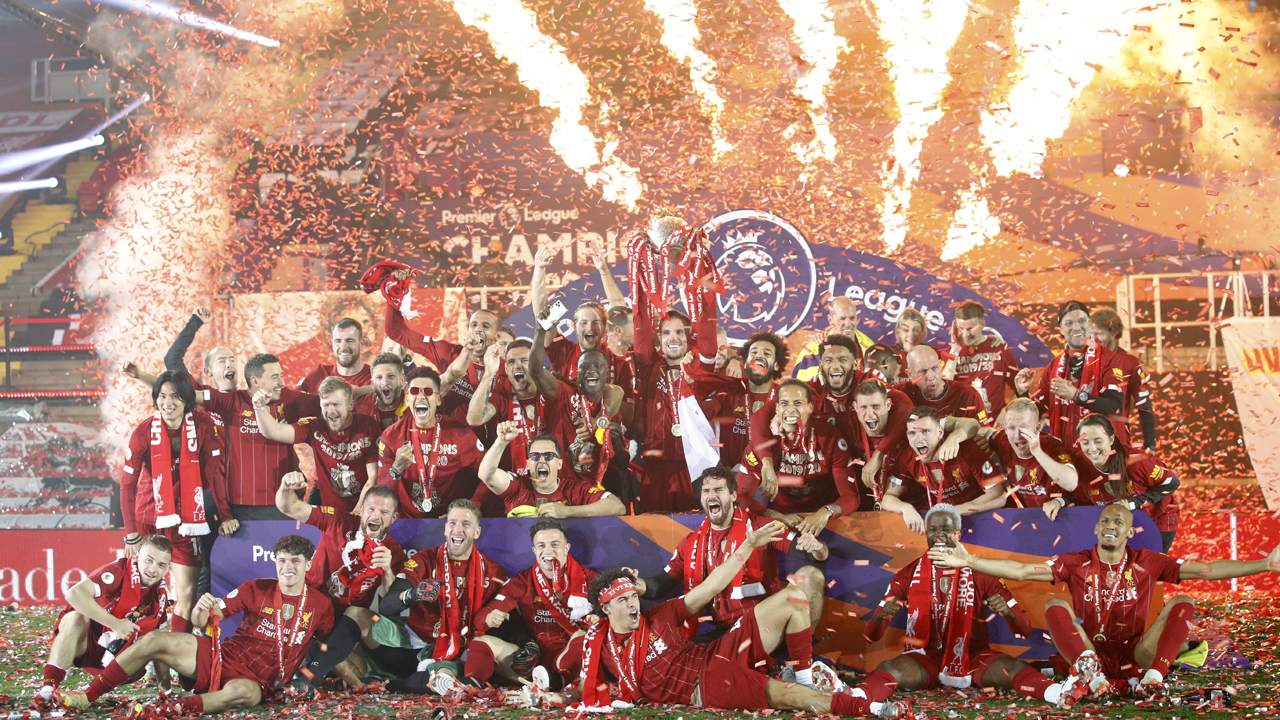 Liverpool’s English midfielder Jordan Henderson (C) lifts the Premier League trophy during the presentation following the English Premier League football match between Liverpool and Chelsea at Anfield in Liverpool, north west England on July 22, 2020. – Liverpool on Wednesday lifted the Premier League trophy at the famous Kop stand at Anfield after their final home game of the season. With no fans able to attend due to the COVID-19 coronavirus pandemic, Liverpool said the idea for the trophy lift was to honour the club’s fans, but Liverpool manager Jurgen Klopp urged fans to respect social distancing measures, after thousands gathered around the club’s stadium and in the city centre following their coronation as champions last month. (Photo by PHIL NOBLE / POOL / AFP)

Liverpool starts their Premier League title defence against Leeds on Saturday after Arsenal made a flying start to the new season with a 3-0 win at Fulham.

Jurgen Klopp’s side begins a season as English champions for the first time since 1990 when they host Marcelo Bielsa’s promoted Leeds on the opening day of the 2020-21 campaign.

Just 48 days after last season’s delayed conclusion, the Premier League is back and Arsenal hit the ground running with the kind of confident display that has become their hallmark since Mikel Arteta took charge.

Arsenal’s free-flowing attack was too incisive for promoted Fulham and Alexandre Lacazette gave the visitors an early lead at Craven Cottage.

Brazilian defender Gabriel Magalhaes scored Arsenal’s second after the break-in his first appearance since his close-season move from Lille.

Aubameyang added the final flourish with a typically eye-catching strike that emphasised why Arsenal are so desperate for the Gabon forward to sign an extension to the contract which expires at the end of the season.

Gunners boss Arteta had good news for fans concerned Aubameyang might leave as he revealed their team’s talisman is set to sign the contract offer.

“I’m really positive we are going to get it done very soon and hopefully in the next few days you will get some news,” Arteta told BT Sport.

With former Chelsea winger Willian providing a pair of assists on his debut, it was the ideal way for Arsenal to start a season that appears full of promise after last season’s FA Cup triumph.

Although their eighth-placed finish in the Premier League ranked as Arsenal’s lowest final position since 1995, Arteta has been a much-needed breath of fresh air and pushing for a place in the top four should not be beyond his revitalised team this term.

“I wanted to see my team determined to come to this difficult ground against a really good team that has been promoted. We had a lot of energy and did the things we trained on in this period,” Arteta said.

“Gabriel didn’t play for six months before today. Mohamed Elneny was brilliant. He has been excellent in training. All the boys tried really hard.”

Palace, who ended last season with seven defeats in their last eight games, took the lead in the 13th minute when Wilfried Zaha volleyed in from Andros Townsend’s cross.

Southampton defender Kyle Walker-Peters got a reprieve when he was harshly sent off for a high challenge on Tyrick Mitchell in the second half, with referee Jon Moss changing his decision to a yellow card after consulting the pitchside monitor.

Danny Ings nearly snatched a last-gasp equaliser but his header was well saved by Vicente Guaita.

While the continued absence of fans due to the coronavirus and shorter than usual break has taken a little anticipation away from the new campaign, Liverpool head into the new season looking to win to be crowned English champions for a record-equalling 20th time.

Only Manchester United have won more than Liverpool’s 19 top-flight titles, but reaching that historic total won’t be easy for Klopp’s team.

Liverpool has watched title rivals Chelsea and Manchester City sign several expensive new players since the end of last season, while the Reds have been quiet in the transfer market.

After losing the Community Shield to Arsenal on penalties last month, Leeds’ visit to Anfield offers a chance for Klopp to assess whether his players are still hungry for silverware.

Leeds are back in the top-flight for the first time in 16 years after winning the Championship last season.

The late-game sees West Ham host Newcastle, who have endured a turbulent close season marred by the failed takeover by a largely Saudi Arabia-backed consortium.

Jupiter’s Moons Are Hotter Than They Should Be. They Could Be Heating Each Other

How the Resistance Media Fell In Love With Avenatti

Who is Clemson’s backup QB? Meet D.J. Uiagalelei, the Tigers’ fill-in for…

Hydroxychloroquine does not counter SARS-CoV-2 in hamsters, high dose of favipiravir…

Meet in the Middle: Crypto Companies and Banks Are Evolving Together

The best Thunderbolt 3 docks for your Mac in 2020

In Rural Missouri, Latinx Communities Learn To Contain And Cope With The Coronavirus

Solheim Cup: How Europe claimed their only victory on American soil with…

Enter $5,000 gaming giveaway for your shot at the ultimate gamer bundle

‘In Death: Unchained’ On Oculus Quest Is The VR Rogue-Lite You’ve Been Waiting For