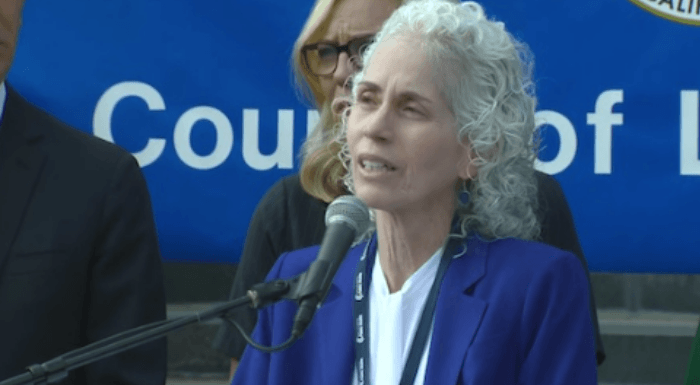 On Thursday, Los Angeles County health officials tried to clarify comments made by Public Health Director Barbara Ferrer after a recording became public of her predicting that schools were unlikely to reopen until after the November election.

Local radio affiliate KFI AM 640 first reported the comments, and the news outlet provided an audio file of Ferrer seeming to make those comments.

NEW: [email protected] has obtained an audio recording of LA County Public Health Director Dr. Ferrer repeatedly saying in a conference call that she doesn’t expect K-12 schools to reopen until “we are done with the election” in November. Listen to audio here: https://t.co/a9VdJS0t6n

L.A. Health Director Ferrer: ‘We’re gonna be where we are now…until…we are done with the elections’

Ferrer said during a reported conference call with local officials, “We don’t realistically anticipate that we would be moving either to Tier 2 [of California’s reopening plan] or to reopening K-12 schools at least…until after the election, after, you know, in early November.”

“If we just look at the timing of everything, it seems to us the most realistic approach to this would be to think that we’re gonna be where we are now…until…we are done with the elections,” she said.

A L.A. County Department of Public Health spokesperson clarified that Ferrer’s comment “was related only to timing any expanded school re-openings to allow for enough time from the implementation of changes to assess impact prior to expansions.”

“DPH will be working closely with schools providing services and supports to high need students over the next 6-8 weeks to implement and assess safety directives and strategies for ensuring infection control and distancing. This information will be used to inform the timing of future activities at schools,” the statement added.

“We don’t realistically anticipate that we would be moving to Re-open schools at least during, uh, at least until after the election” Dr Barbara Ferrer LA County Public Health Director just gave up the ghost, (Audio) obtained by KFI AM 640

RELATED: Cuomo Bashes Trump Despite Once Praising Him On COVID-19, And Says In NY ‘Our Way Worked, It Was Beautiful’

In July, California Gov. Gavin Newsom issued a statewide mandate banning students from attending in-class school. Since that time, Orange County school districts have planned to reopen campuses by the end of September, but most other districts remain closed to in-class attendance.

Wreck of WWII battleship with Nazi symbol discovered off Norway

Closing In on Stimulus Deal, Lawmakers Clash Over Fed’s Role

Mark Meadows predicts no Covid-19 relief bill until after September

One protester’s week on the streets in Minsk

Garbage time: NFC East on wrong side of history

Porsha Williams’ Latest Photo Has Fans Laughing In The Comments