Mortgage applications decreased 2.5 percent from one week earlier, according to data from the Mortgage Bankers Association’s (MBA) Weekly Mortgage Applications Survey for the week ending September 11, 2020. This week’s results include an adjustment for the Labor Day holiday.

“Mortgage rates held steady last week, and the 30-year fixed rate – at 3.07 percent – has now stayed near the 3 percent mark for the past two months. A 5 percent decline in conventional refinances pulled the overall index lower, but activity was still 30 percent higher than last year. With the flurry of refinance activity reported over the past several months, demand may be slowing as remaining borrowers in the market potentially wait for another sizeable drop in rates,” said Joel Kan, MBA’s Associate Vice President of Economic and Industry Forecasting. “Applications to buy a home also decreased last week, but the underlying trend remains strong. Purchase activity has outpaced year-ago levels for 17 consecutive weeks, with a stronger growth in loans with higher balances pushing MBA’s average loan size to a new survey high of $ 370,200.”
…
The average contract interest rate for 30-year fixed-rate mortgages with conforming loan balances ($ 510,400 or less) remained unchanged at 3.07 percent, with points decreasing to 0.32 from 0.36 (including the origination fee) for 80 percent loan-to-value ratio (LTV) loans.
emphasis added 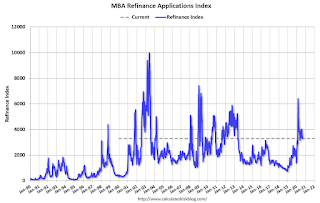 The first graph shows the refinance index since 1990.

The refinance index has been very volatile recently depending on rates and liquidity.

But with record low rates, the index is up significantly from last year. 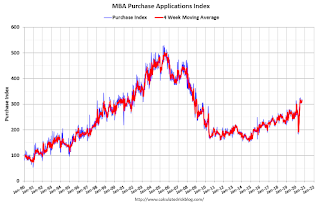 According to the MBA, purchase activity is up 6% year-over-year unadjusted (like last week, this year-over-year percent was distorted by the timing of Labor Day).

Note: Red is a four-week average (blue is weekly).

Apple Shares ‘The Device That Saved Me’ Apple Watch Video

“Share of Mortgage Loans in Forbearance Slightly Decreases to 3.91%”

Under Armour Will Sell MyFitnessPal for a $130 Million Loss

10-year Treasury yield rebounds back above 1.20% as investor sentiment shifts

Small subsets of high-risk patients produce few or no antibodies, however —…

Coronavirus can survive for 28 days on some surfaces: Study

How Wealthfront’s Tax-Loss Harvesting Could Cover Your Advisory Fee

Life after Death: The Transformation from Corpse to Skeleton Involves Battalions of…

Smartwatches could predict your marathon time with increased accuracy

Learning to live with Woke

Riptide in the World Economy