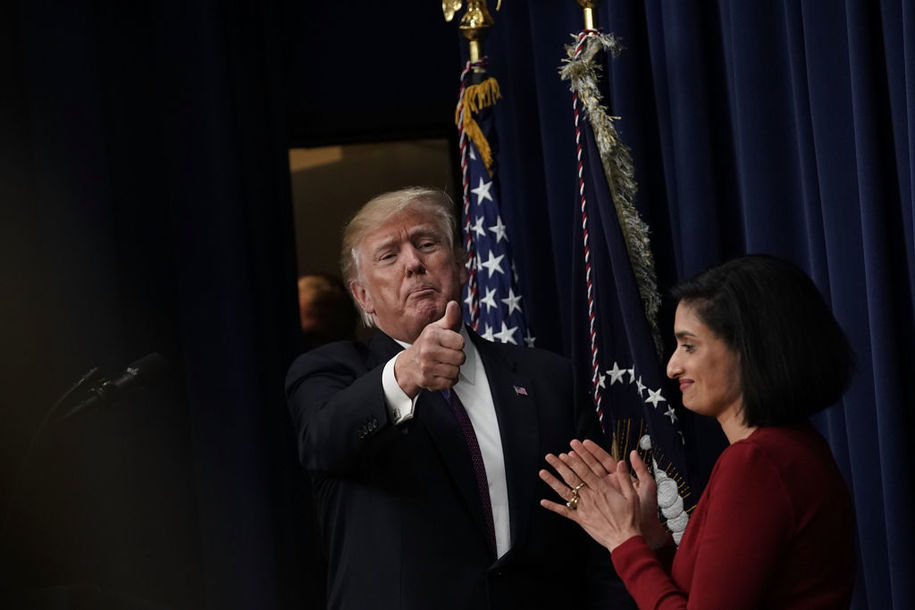 Taxpayers also coughed up nearly $ 1,000 to go to a consultant that got Verma an op-ed placed on Fox News’ website. They shelled out more than $ 13,000 for other consultants who “spent months promoting Verma to win awards like Washingtonian magazine’s ‘Most Powerful Women in Washington’ and appear on high-profile panels.” All in all, congressional investigators found, she spent more than $ 3.5 million “on a range of GOP-connected consultants, who polished her public profile, wrote her speeches and Twitter posts, brokered meetings with high-profile individuals—and even billed taxpayers for connecting Verma with fellow Republicans in Congress.” That’s while there’s an office within Health and Human Services that handles communications for the department and its leadership. That we’re already paying for.

Verma had more than a dozen highly paid outside consultants at any given time in her first two years in office, a “rotating cast” of people intended only to enhance her position, all while she was trying to make Medicaid stingier and stingier by imposing work requirements and other restrictions on the program. All in the name of “fiscal restraint.” She spent nearly $ 9,000 on contractors for one two-day trip to New York, “including stays in a hotel that cost more than $ 500 per room per night.” She paid consultants to act as her personal drivers and press assistants in addition to creating plans intended to “highlight and promote Seema Verma leadership and accomplishment,” as one of the draft plans put it. That effort alone cost tens of thousands of dollars.

It’s just a nauseating read, particularly right now in this pandemic when millions of people are in financial jeopardy and Senate Republicans and the White House refuse to help them. Like this: “Consultants also charged the health department hundreds of dollars to set up each of Verma’s off-record conversations with reporters, pundits and influencers, such as billing taxpayers $ 837 to arrange Verma’s lunch with Marc Siegel, a Fox News contributor, and $ 209 for a conversation with then-Rep. Barbara Comstock (R-Va.).” Oh, and this, too: “The consultants also billed taxpayers at least $ 1,117 for arranging Verma’s profile in AARP’s magazine and at least $ 3,400 to coordinate Verma’s appearance on POLITICO’s ‘Women Rule’ podcast.”

“Congress did not intend for taxpayer dollars to be spent on handpicked communications consultants used to promote Administrator Verma’s public profile and personal brand,” Reps. Frank Pallone (D-N.J.) and Carolyn Maloney (D-N.Y.) and Sens. Ron Wyden (D-Ore.) and Patty Murray (D-Wash.) said in a joint statement with the release of the report. “Administrator Verma has shown reckless disregard for the public’s trust. We believe she should personally reimburse the taxpayers for these inappropriate expenditures.” They’ve asked the Government Accountability Office to review all the payments made to communications consultants by CMS during the period. Government entities are prohibited from using taxpayer funds for “publicity or propaganda purposes” unless they are expressly appropriated for that purpose, such as for publicity around open enrollment periods for the Affordable Care Act.

Verma’s reliance on outside consultants made the job of career public servants that much harder, creating confusion within the agency and interfering even with policy. The investigation found that Verma and her aides shared agency policy proposals with her hand-picked Republican PR consultants before announcing the policies publicly—sometimes months before the proposed rules were issued. In one case, a plan “overhaul[ed] the $ 15 billion electronic health record market.” She gave that to contractors in November 2018, trying to get them to pitch CNN’s Sanjay Gupta to do the story. That was despite being warned that this was confidential information not to be shared outside of the department, and her own top aide warning in an email that she was “fairly concerned about giving this much info prior to a rollout.” The rules where officially issued for another three months, in February 2019.

Her habit of prioritizing meetings with these consultants, and keeping career staff out of the loop—including legislative staff in policy meetings—was also revealed in the report. In one case, a legislative staffer was blocked from attending a session on the Medicaid work requirement proposal, ostensibly because Verma wanted the meeting kept “small.” Four of her Republican communications consultants had been invited already. This kept the actual staff and the office in “chaos,” Johnathan Monroe, a career civil servant who helped lead the agency’s media relations team, wrote in an email that the report included. “The fact that we have managed this much is a testament to how hard [the communications office] has been working to help correct and cope with the chaos,” he wrote to colleagues.

It’s worth noting, because of Susan Page hosting a party for Verma to network and boost her profile and because Page is the moderator of that VP debate, that Verma came to the administration through Vice President Pence. She had been one of his outside healthcare advisers when he was governor of Indiana as a corporate consultant. She made millions off of the state of Indiana, consulting on Pence’s plan to dismantle Medicaid there. That’s just too much Village coziness to be allowed. Page should not be moderating that debate.

NASA Is Officially in The Market For Moon Rocks

COVID May Have Been in LA Earlier Than Believed

Sri Lanka not under threat of terrorism: Defence ministry after US updates travel…

Guardiola says no new striker for City due to Covid impact

5 Saws You Should Have in Your Workshop

Sleek And Beautiful, The Navy’s Littoral Combat Ship Started Off As A Failure

CHVRCHES and John Carpenter Team Up for New Remixes

WIN! The Ultimate “Match in a Box” Bundle with Barclays!

What is dark matter?

COVID-19 is 10 times deadlier for people with Down syndrome, raising calls for early…

Pakistan: 4 killed in clashes with police near shut Afghan border