Mike Pence Warns of Biden’s Turn to Socialism: ‘It Looks to Me like Bernie Won’ 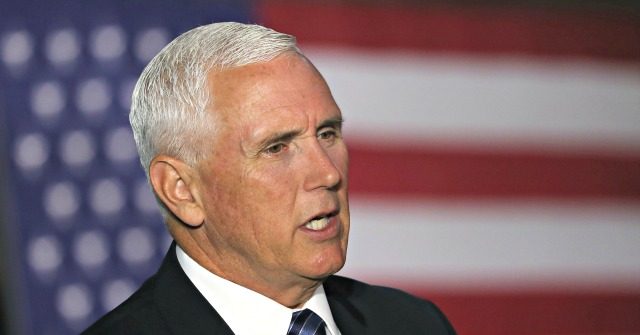 RIPON, Wisconsin — Vice President Mike Pence delivered a speech in Wisconsin on Friday detailing a “time for choosing” for Americans in 2020 and warning of former Vice President Joe Biden’s turn toward socialism.

“I thought Joe Biden won the Democratic primaries, but looking at their unity agenda, it looks to me like Bernie won,” he said, referring to Biden’s “Unity agenda” drafted with the support of Democrat Socialist Sen. Bernie Sanders.

The vice president spoke to about 50 people at Ripon College, warning that Biden would pursue a path for America that is sharply different than the four years of record economic success under the Trump administration.

“It’s clear Joe Biden would be nothing more than an autopen president,” he said, “a Trojan horse for a radical agenda.”

Pence said he traveled to Ripon, where the Republican party was born, to remind Americans what they stood for.

“When that first convention met here in 1854, they wrote that their decision to found a new political party had been ‘forced upon us by the slave power and in the defense of freedom,’” he said. “They said that they would cooperate and be known as Republicans.”

The choice in the next election, he repeated, was stark.

“It’s not so much whether America will be more conservative or more liberal, more Republican or Democrat, more red or blue,” he said. “It’s about whether America remains America.”

“Before us are two paths, one based on the dignity of every individual, and the other on the growing control of the state,” he said. “Our road leads to freedom and opportunity. Their road leads to socialism and decline.”

Pence said that the Biden-Sanders agenda was based on “envy and not aspiration” and Americans “harboring ill will” to their neighbors.

Trump cut taxes, he said, but Biden would increase taxes by $ 4 trillion in a decade, noting that it was twice as much as failed presidential candidate Hillary Clinton proposed in 2016.

Trump cut regulations, he noted, while Joe Biden would create an “avalanche of regulations” that would choke the economy. He noted that Biden wanted to rejoin the Paris climate accord, which called for a “crushing weight” on American business and the energy industry.

Pence said Trump stood up to China and fought for free and fair trade but that Joe Biden “pretends to be tough on China.”

Pence said that Trump stands “without apology for the sanctity of human life” but that Biden supports taxpayer funding for abortion, advocates repealing the Hyde amendment, and backs late-term abortion.

Pence celebrated Trump’s promise to secure America’s borders and the construction of 200 miles of wall while standing with Immigration and Customs Enforcement officers and Customs and Border Protection agents.

Biden, he said, would sharply reverse the gains made by the Trump administration to stem the flow of illegal immigration.

“Joe Biden is for open borders, end to deportations, free lawyers and free health care for illegal immigrants, all paid by American taxpayers,” he said.

Pence reminded the audience that President Trump stood with the men and women of law enforcement and said that the left was proposing a false choice in the wake of the George Floyd protests.

“We know that it is a false choice to think that we have to choose between supporting law enforcement and supporting our African Americans neighbors and friends,” he said.

He reminded everyone that Joe Biden believes America was “systemically racist” and “capitulated to the radical left-wing mob” by supporting cuts to law enforcement.

Trump would “back the Blue,” Pence said, whereas “Joe Biden would weaken the thin blue line between order and chaos.”

“You won’t be safe in Joe Biden’s America,” he said.

Netatmo’s HomeKit doorbell could be just around the corner

Amphibious Ready Groups: The Navy’s Plan for a Pacific Counterpunch

Reporting on migrants and refugees in Europe and Asia

WHO urges calm approach to omicron variant of COVID, warns travel restrictions may…