Mike Pompeo: Time to Send Afghanistan on ‘Next Step in Its Trajectory’ with Peace Talks 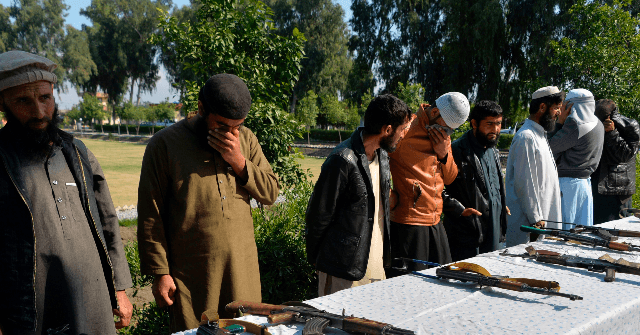 Secretary of State Mike Pompeo told reporters on the way to Doha, Qatar, that the United States is committed to ending the war in Afghanistan once and for all and eventually reducing American forces on the ground there to zero.

Pompeo is, as President Donald Trump announced at a White House press briefing on Thursday, attending talks between the Afghan government and Taliban leadership in Doha to begin the peace process and eventually end America’s longest war. The summit, which will be on Saturday, comes a day after the 19th anniversary of the Sept. 11, 2001, terrorist attacks. Pompeo will arrive in Doha the evening of Sept. 11, and has a series of meetings lined up with Afghan and Taliban leaders on Saturday Sept. 12 in Doha. On his return trip to Washington, DC, Pompeo will stop in Cypress to meet with its president. Breitbart News is accompanying the Secretary on the historic trip to Doha.

“I want to thank you all for joining us on this trip. It’s really historic,” Pompeo said on the plane en route to Doha. “It’s taken us longer than I wish it had to get from Feb. 29 to here. But we expect Saturday morning for the first time in almost two decades that we will have the Afghans sitting at the table again. We’re prepared to have what will be contentious discussions about how to move the country forward, to reduce violence, and to deliver what the Afghan people are demanding: a reconciled Afghanistan – government that reflects the country and that isn’t at war.”

Pompeo said that American “men and women who have been there now since 9/11—almost 20 years now” are ready to come home.

“We’ve spent a lot of American blood and treasure to help the Afghan people be successful, to take down Al Qaeda in Afghanistan, and we’ve had tremendous success,” he said. “There’s less than a couple hundred Al Qaeda left. The vast majority of their senior leadership are no longer on the battlefield. We can be proud of what we’ve achieved, but we can be proud of this next step. I’m mindful of how difficult these conversations will be among the Afghans, but it’s theirs for the taking. It’s their country to figure out how to move forward and make a better life for the Afghan people.”

When asked by Breitbart News about this trip occurring on the anniversary of the 9/11 attacks, Pompeo said he believes the American people’s “righteous indignation” in response to the deadly attack that left the Twin Towers in New York City destroyed and thousands of Americans dead was “wholly justified.” But he said that “now is the moment for Afghanistan” to be sent on “the next step in its trajectory” by negotiating peace and ending the war.

“I don’t think there’s any American who doesn’t remember that day anywhere who’s over 25 or 24-years-old – anyone old enough to be watching the TV screen that day or living in New York City that day,” Pompeo said. “I remember I was in Kansas running my small business, I remember getting a call from my wife saying ‘turn on the TV—do you see what’s going on?’ I remember the anger, and I remember the righteous indignation that we all had. America has responded to that in a way that was wholly justified, enormously successful, and appropriate. Now is the moment Afghanistan on the next step in its trajectory. There’s still jihadists in the world. There’s still counterterrorism work that needs to be done, and President Trump is deeply mindful of that. We’ll continue to be sure we protect the homeland and do all the things necessary to reduce risk from terrorist acts not only from Afghanistan but from Syria and Iraq and Asia and from all over—al-Shabaab—all the places where there are terrorists, America will still do its part to make sure that we’re reducing risk to the homeland as well.”

“Our commitment to reduce our forces to zero is conditioned on them executing their obligations under the agreement,” Pompeo said. “We’ve been very clear about their responsibilities with respect to terrorist activity taking place in Afghanistan that is plotting external operations. It’s very clear that the violence levels have to come down to acceptable levels. We saw just yesterday or the day before there are a lot of spoilers out there. There are people who don’t want this to go forward. They want America mired in this place. They don’t want peace in Afghanistan. Most of the Afghanistan people want that. We’re going to stay focused on it. That’s where our focus—the president said, and I think General McKenzie said yesterday, that by late fall we’ll be down to roughly 4,500 U.S. soldiers. It’ll still be a significant number. I’m mindful too that it’s not just Americans who are there. There’s an enormous number of international forces who have sacrificed as well in this fight for the last 19 plus years. We want everyone to have the chance to reduce the risk and reduce the forces as well, so our movement to the appropriate levels is consistent with the two goals the president laid out when I became Secretary of State. Two goals—one, reduce our forces there. Get as close to zero as quickly as you can get to that number, and we’re intent on doing it. Second, we can’t sacrifice security for the homeland. I believe those objectives are both achievable between what we’ve done and what the Department of Defense has done over the last couple years. We’ve made real progress on both objectives.”

Some of the “conditions” that Pompeo said the United States is considering in its decisions on the timeline of troop withdrawals relate to the Taliban and Afghan government’s ability to ensure that risks to the American homeland do not arise again from Afghanistan.

“These conditions are a risk-based set of conditions,” Pompeo said. “The negotiations are a part of that in a sense, but what we’re really looking at is what’s the security cost, what’s the risk. The risks are Al Qaeda has places to grow, risks are attacking places that are external. Those are the conditions that we’re looking at as we advise the president on how quickly we can get to our objective to have no American forces in Afghanistan.”

That being said, Pompeo added that he nothing is for sure going to happen as the last nearly two decades have demonstrated.

“There are no guarantees in Afghanistan,” Pompeo said. “I think after 19 years, this is what we can see. We can also see that the previous administration had tens of thousands of forces there, and they couldn’t change the core objective at all. We’ve done that. We’ve executed that. I think the Taliban has every incentive to get this right. President Trump has made clear: If they put Americans at risk, then we’re going to come at them hard. We’ve done that over these last three and a half years. We’ve inflicted real costs on the Taliban when they’ve put American lives at risk, and that’s something we will continue to do.”

Pompeo also said that even when the United States does end up fully withdrawing from Afghanistan—a yet-to-be-determined date dependent upon those aforementioned conditions—the United States is prepared to send forces back in, if needed, if the Taliban and Afghan government fail to contain terrorist threats to the United States homeland.

“The president has said that,” Pompeo said. “The president has said whether it’s a year from now or three years from now, if there’s a risk to the United States of America, we’ll go in—I think he used more colorful language than this—but I think he said we’ll go in there and we’ll take care of business. We’ll execute the mission in a way that will protect and preserve American security.”

Serena stunned by Azarenka at US Open

How to Set Up and Use iCloud Email Aliases

A Thai Rescue Worker Saved a Baby Elephant With CPR, And We Are Crying

Americans Have A Long History Of Opposing Refugees. But Most Support Afghan Asylum…

India’s Best Anti-Tank Missile is Headed to the Himalayas

Only 1 in 10 Kids With ADHD Will Outgrow It

Underwater Autonomous Vehicles Helping Navy Get More for the Money

Donald Trump Banned From Twitter in Final Days of Presidency

Why Sony can no longer compete with Microsoft – Reader’s Feature