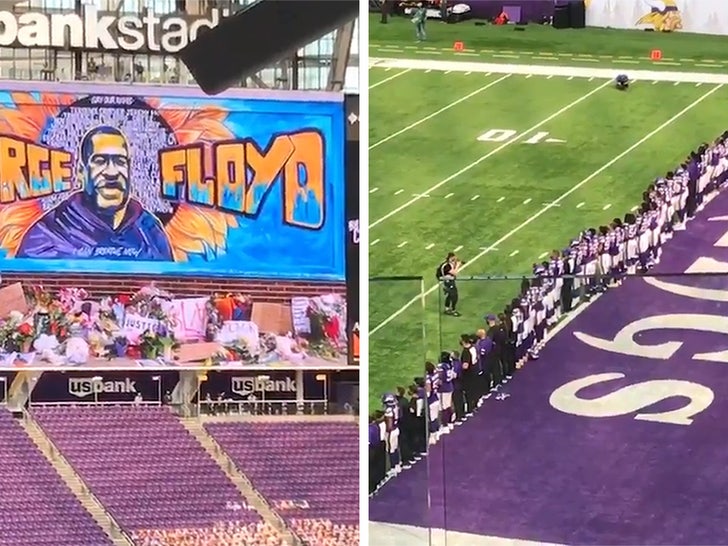 George Floyd was top of mind for the Minnesota Vikings ahead of their first game in a pandemic-riddled season — and they paid tribute to him with his family in attendance.

FOX 9’s Dawn Mitchell tweeted a video from high up in the stands of a mostly empty U.S. Bank Stadium — which showed, before kickoff, all of the Vikings players standing shoulder-to-shoulder at the goal line as the announcer made some comments about Floyd’s story.

George’s family members were captured on the Jumbotron, standing together, as everyone looked on. The big screen also displayed snapshots of some of the many memorials/murals that have popped up around town in the wake of his death.

The Vikings’ remembrance was one of the more stand-out ones across the leagues as games ramped up — other teams had more scattered approaches to addressing social justice.

The Browns’ Myles Garrett took a knee, all Patriots players stood together, Colts head coach Frank Reich knelt himself, and the Dolphins remained in the tunnel during the National Anthem. There’s more games to come, but so far … not everyone’s on the same page.

Of course, any and all of these reactions are better than what some fans did during Thursday night’s premiere match between the Chiefs and Texans … fans booed when the players locked arms in unity.

Ah yes … football is back.

Toots Hibbert helped give reggae its name, its sound and its enduring grace

Amazon Made a Surprising Change in 2021. Yes, You Should Definitely Copy It

An emerging new alliance of democracies

Australia has almost eliminated the coronavirus — by putting faith in science

Gay Nashville Couple Denied Wedding Venue, Get Another at…