As looting and rioting took place in cities across the country during the past several weeks, networks in the “mainstream media” went to great lengths to downplay the violence that was part of what happened.

One network that went over the top was ABC News, which portrayed a protest in Oakland, California, where a courthouse was set on fire and a police station was vandalized, as “peaceful.”

According to an article posted in Monday by Fox News Channel media reporter Brian Flood, a tweet from the ABC news service called the incident “a peaceful demonstration intensified.” 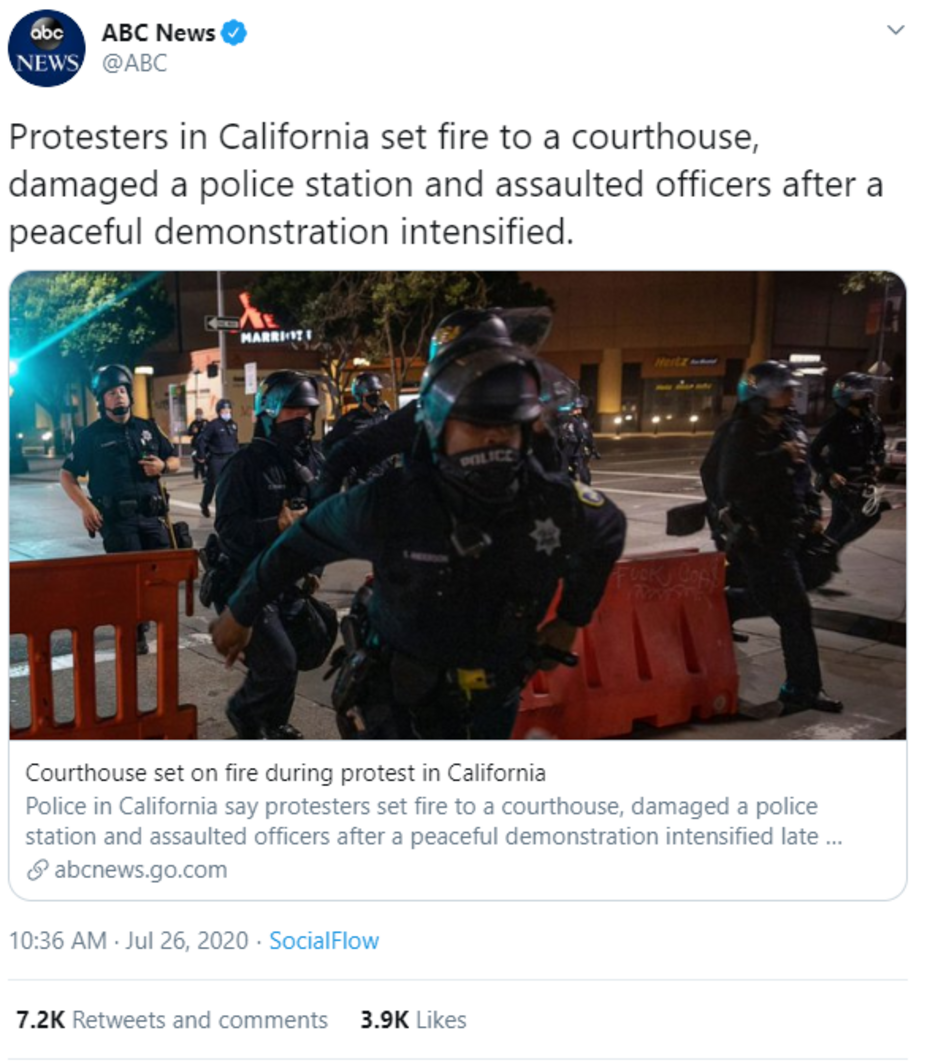 The item, which was linked to an Associated Press story, stated:

A protest through the streets of downtown Oakland, California, in support of racial justice and police reform turned violent when “agitators” among the demonstrators set fire to a courthouse, vandalized a police station and shot fireworks at officers, authorities said.

Hundreds of protesters marched [while] smashing windows of the city’s police headquarters and setting a fire inside the Alameda County courthouse.

As you probably expect, the description of the clash sparked outrage on social media as the “Disney-owned news operation appeared to downplay the violence.” One of the first responses came from James Woods, an actor and conservative activist who added the phrase “after the Democratic mob went wild” to the end of the message before stating that he had “fixed it for you.”

Next up was Dan Gainor, vice president of business and culture for the Media Research Center, who responded: “Peaceful? What psychopath writes tweets for @abc, Dahmer?”

What a revealing headline!

The media’s robotic insistence on “peaceful” protest is completely undermined by the enumerated actions of the protesters which include vandalism, arson and assaulting police officers.

One imagines that if the mostly “peaceful” (but intense!) protest had resulted in violence and damage to the ABC News building, the network’s response would have been different.

GOP Relief Bill Sets The Stage For A Showdown With Democrats

Pill for diabetics could also protect against heart failure

Liverpool vs Arsenal: Gunners look to chaos at Anfield

“Ok Google” not working? Here’s how to fix it

Why Do We Buy Things We Never Use? (Rebroadcast From Ep.22)

How To Find Out Who Your LGBTQ+ Ancestors Are

President Trump Continues To Brag On Twitter Amid Distressing Crises