MSNBC’s Cross Rants Against Trump’s ‘BS’ on Police Killings: ‘Red Meat’ to His ‘Klan-Like Base’ 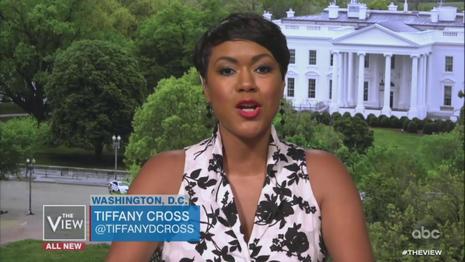 MSNBC guest host and political analyst Tiffany Cross appeared on The View Thursday to promote her new book about black voters in the upcoming election, but she also brought her disdain for Trump voters over as well. Cross told the hosts that Trump was feeding “BS” his racist Ku Klux Klan base, when he told a reporter that more white people die at the hands of police.

As Cross came on to the show via satellite, co-host Whoopi Goldberg praised the frequent fill-in host for MSNBC’s AM Joy as someone with “a strong voice speaking truth to power.” I guess that’s one way to put Cross calling all Trump voters ignorant and stupid. Or when she insisted they knowingly voted for a “white supremacist.”

Whoopi first invited the race-baiting analyst to comment on Trump’s response to a CBS reporter in an interview about more whites actually being killed by police, and how he viewed displaying the Confederate flag as “freedom of speech.”

Cross went off against Trump and his “klan-like” voters:

WHOOPI: Two days ago, the guy in the White House said in an interview that white people are killed by the police more than anyone else, and flying the confederate flag is freedom of speech. I’ll just turn it over to you.

TIFFANY CROSS: Yeah. Thank you, Whoopi. I’m so tired of this — yeah. I’m so tired of this president spitting in our face and trying to convince us it’s raining. That is clear BS, and anybody with any ounce of historical perspective would know that. When I think of the families of Tamir Rice, of Trayvon Martin, of Orlando Castile, of Terence Crutcher, of Ahmaud Arbery, Rayshard Brooks, of George Floyd, of Breonna Taylor of Sandra Bland and on and on and on, and I think of the horrific brutality black people have faced at the hands of law enforcement, I wonder what would possess a president to say something like that, and it’s really because he’s tossing red meat to his klan-like base that he needs so desperately to win in November. I think even posing the question, were he a reader, I would encourage him to buy a copy of my book because I write about how law enforcement slow [?]  their rates through white supremacy at the early part of the last century. And so when you look at it through a historical perspective, asking the question can feel disrespectful because we know that there’s systemic racism in law enforcement. So I wouldn’t debate that issue any more than I would debate a fool on if lemons are yellow. We know the answer. The question is, what do you plan to do about it, and he has consistently answered that by saying, nothing.

It’s funny that Cross says Trump needs to be more informed of this country’s history, when it sounds like she doesn’t understand that “the klan” was started by Democrats!

Furthermore, Cross’s claim that there’s systemic racism in law enforcement is only an undisputed fact to the radical left who wants to defund the police. She conveniently removes any room for debate or scrutiny to her opinions by saying that it’s as obvious as “lemons are yellow.”

Ironically, Whoopi got into a spirited debate with Cross about race when it came to who would be on Joe Biden’s ticket. Whoopi disagreed with Cross and Sunny Hostin, after they insisted a black female VP was absolutely necessary to win black female voters. Whoopi argued that the best candidate should be given the position regardless of skin color.

This segment of liberal hate was brought to you by Febreze and Maybelline.

Reopening schools during the COVID-19 pandemic, and taking the heat out of crude oil separation

Hillary Clinton: We Have to Be Ready if Trump Doesn’t ‘Go Quietly’

‘It May Be that We Will Have to Boost People Intermittently’

Here’s how UX design can protect users’ security and privacy