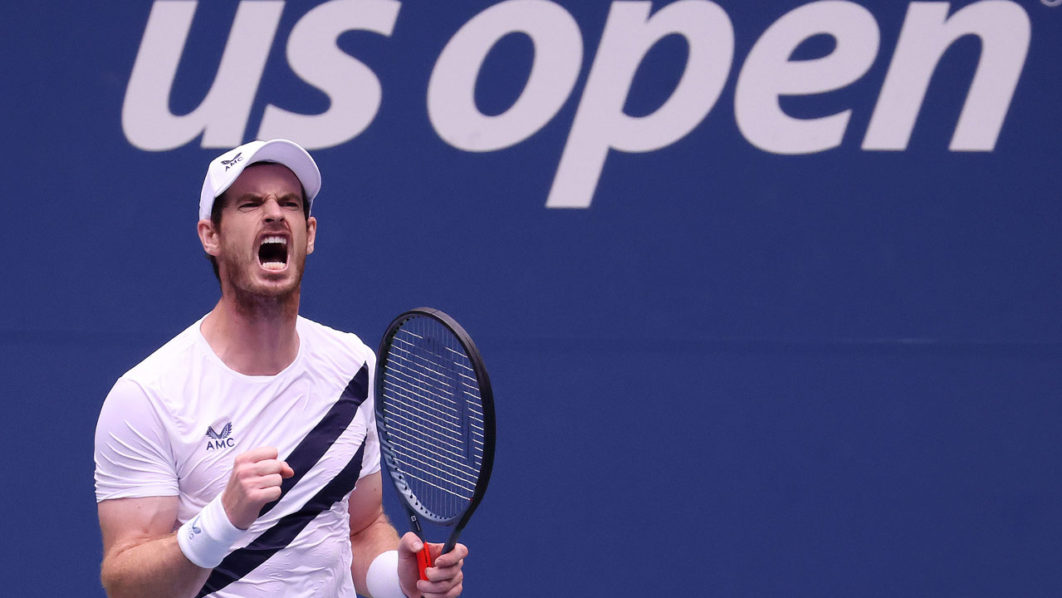 Andy Murray of Great Britain reacts during his Men’s Singles first round match against Yoshihito Nishioka of Japan on Day Two of the 2020 US Open at the USTA Billie Jean King National Tennis Center on September 1, 2020 in the Queens borough of New York City. Al Bello/Getty Images/AFP

Andy Murray of Great Britain advanced to the second round of the on-going U.S Open Tennis Championship with a comeback victory over Japan’s Yoshihito Nishoka in a night match played in Arthur Ashe Stadium. After winning the first two sets 6/4, 6/4, the Japanese player seemed headed to a quick victory over Murray whose condition was suspect as he was returning to competition after a hip replacement surgery.

The hard-fighting Scot barely escaped a straight-set loss when he took the third set in a tie break (7 points to 5), repeated the feat in the fourth set (7 points to 4), and clinched the decider 6/4.

The Murray classic was followed by third-seeded Serena Williams, who defeated compatriot Kristie Ahn 7/5, 6/3 for a record-setting 102 singles victories in New York since her debut in 1998 and the first title in 1999. After the close first set, Serena was devastating in the second set and tallied 12 aces and only two double faults in the match. It was an apt birthday victory for her daughter Olympia. The philosophical star commented on the role of sports.

“What’s most important about this event taking place is just the spirit. Sports have been gone for so long, particularly tennis. We missed two Grand Slams. The morale can be really low in the world with everything that’s going on. Sometimes you just want to take your mind off of it.”

People have been doing that for generations through sport.” Hurray!

The curtain is falling for the career of 38-year old Venus Williams, who lost 5/7, 2/6 to Karolina Muchova. However, Venus made history with her 22nd appearance at the Open after her 1997 debut when she lost to Martina Hingis in the finals. She missed playing the U.S. Open in 2003 (abdominal injury) and 2006 (wrist injury). She won her first U.S. Open in 2000 but was denied more by her baby sister. It was her 86th appearance in the singles draw of a Grand Slam, a record by any player, male or female.

It was a sad exit for former champion, Kim Klijsters, who was staging a comeback for the second time and received a wild card entry. She won the first set 6/3, but Russia’s Ekaterina Alexandrova prevented her from victory by taking the second set 7/5. After the close second set, there was little left as Kim lost the third set 1/6.

The 37-year old Belgian, mother of three children, had not played a Grand Slam event since the 2012 U.S. Open.

Only 1 in 10 Medical Treatments Is Backed by High-Quality Evidence, Study Finds

Take a Dive into the Deep Sea Discount Sale

The Emotionally Challenging Next Phase of Covid-19

: Oracle reportedly chosen over Microsoft to take over TikTok

The Governor And House Primary Races Were Watching So Far

Hydroxychloroquine does not counter SARS-CoV-2 in hamsters, high dose of favipiravir…

The Dak dilemma: Will Cowboys do right by QB?