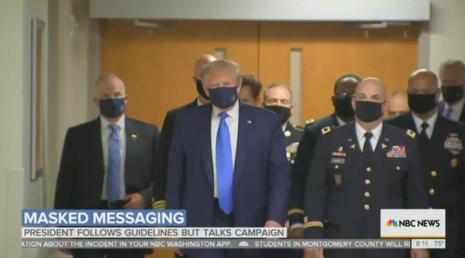 “Perhaps trying to get ahead of any effort by the left-wing mob to cancel him, NBC’s Sunday Today host, Willie Geist wanted viewers to know, “I didn’t say he [President Trump] was concerned about the coronavirus crisis. I said maybe he’s sending a signal that he is, but every other sign suggests he’s not right now.” The comment came after the network suggested Saturday was the first time President Trump had worn a facemask in public, but a Today report from May 22 proved that claim to be dubious.”
“After the President donned a face mask while touring Walker Reed Medical Center over the weekend, the opposition media breathlessly declared that it was the first time Trump had worn a mask in public.” –Newsbusters

Liverpool preparing for Lovren sale amid interest from Zenit

Amazon: Yes, we banned TikTok – but we didn’t mean it!

Levy can strike gold for Spurs with “very talented” starlet with…

Rapper Bun B: Jay-Z Had Me Kicked Off Beyonce Video Set!!

Green Upheaval: The Geopolitics of Energy