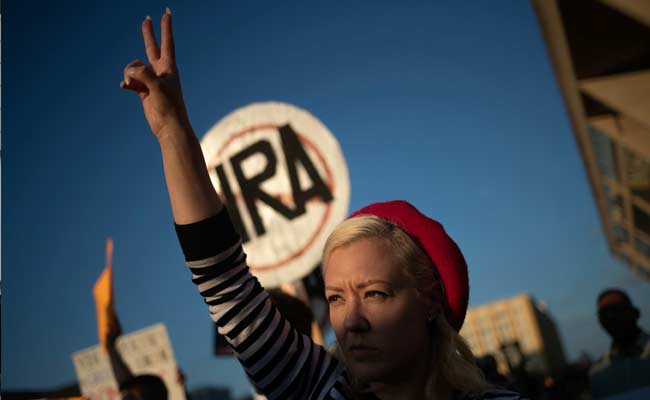 The state of New York sued the National Rifle Association and its leader Wayne LaPierre Thursday for financial fraud and misconduct, aiming to dissolve the powerful US conservative lobby.

State Attorney General Letitia James said LaPierre and three other top NRA officials used the dues and donations of members for years as their “personal piggy bank,” spending tens of millions of dollars on themselves and cronies in violation of laws governing non-profit organizations.

The four “basically looted its assets,” leaving the once wealthy group that pumped millions into Republican political campaigns close to being insolvent, James said.

In a statement, the NRA accused James of filing the suit “to score political points” with a national election three months away.

“This was a baseless, premeditated attack on our organization and the Second Amendment freedoms it fights to defend,” NRA President Carolyn Meadows said.

She said the NRA had countered with a lawsuit Thursday against James.

“We not only will not shrink from this fight — we will confront it and prevail,” Meadows said in the statement.

For decades the NRA has represented the views of millions of gun owners and enthusiasts across the United States, fighting with substantial success to loosen and eliminate laws on gun control, citing the Constitution’s Second Amendment right to bear arms.

Its endorsements of “pro-gun” candidates have determined races and frightened moderate candidates from speaking out for even modest firearms regulations.

LaPierre, who has run the NRA for nearly three decades from his position as executive vice president, became one of Washington’s top power brokers.

He claimed a major role in Trump’s 2016 election, and Trump’s sons Eric and Donald Jr are members and regularly participate in NRA events.

Asked about the lawsuit, Trump said at the White House that it was “a terrible thing.”

“I think the NRA should move to Texas, and lead a very good and beautiful life,” he told reporters.

But James said LaPierre illicitly used NRA funds to pay for private jets to carry his family on frequent luxury vacations to the Bahamas, and transport members of his extended family around the country.

He billed the NRA for safari trips his family took in Africa and his personal golf course membership, without the NRA having officially determined they should be reimbursed.

He kept his own $ 26,500 a month “travel consultant” in Los Angeles despite the NRA having a regular travel agent, and accepted luxury yacht vacations and other gifts from companies who earned tens of millions of dollars as vendors to the NRA.

The lawsuit also accuses LaPierre of giving himself a $ 17 million retirement package without the approval of the association’s board.

According to the suit, much of LaPierre’s alleged abuses were enabled by the other three defendants, all of whom he personally recruited: former treasurer Wilson Phillips, general counsel John Frazer, and former chief of staff Joshua Powell.

They helped hide the lavish payments and reimbursements to LaPierre, his cronies and family, as well as to themselves, according to the suit.

“The NRA’s influence has been so powerful that the organization went unchecked for decades while top executives funneled millions into their own pockets,” said James.

“The NRA is fraught with fraud and abuse, which is why, today, we seek to dissolve the NRA, because no organization is above the law.”

In a statement, LaPierre branded the suit an “a unconstitutional, premeditated attack aiming to dismantle and destroy the NRA.”

“The NRA is well governed, financially solvent, and committed to good governance. We’re ready for the fight. Bring it on,” he said, while not addressing specific allegations.

But she conceded that the state has only forced the shutdown of two other mismanaged charities in recent years, one of them the president’s Trump Foundation.

The lawsuit came as the NRA, though its non-profit side is financially weakened, was expected to pump huge sums into the looming presidential and congressional elections in November through its separate Washington lobbying arm, NRA-ILA.

Jason Ouimet, head of the lobbying arm, told the Washington Free Beacon Thursday that they will put “tens of millions of dollars” into races around the country.

T-Mobile tops AT&T to become the second largest wireless carrier in the U.S.

LeBron James to sit out Lakers-Rockets clash with groin problem

Employers and insurance companies are trying to deny COVID-19 workers’…

Weekly poll results: the Microsoft Surface Duo excites, but many have reservations

‘Medal Of Honor: Above & Beyond’ VR Multiplayer Looks Absolutely Massive

This Cool 4,400-Year-Old Snake Stick From Finland May Have Belonged to a Shaman

FTC has a chance for a do-over in its fiasco antitrust case against Facebook, legal…

The U.S. Army Passed On These Three Rifles. What if They Hadn’t?

How high-end cameras and algorithms are making escooters safer