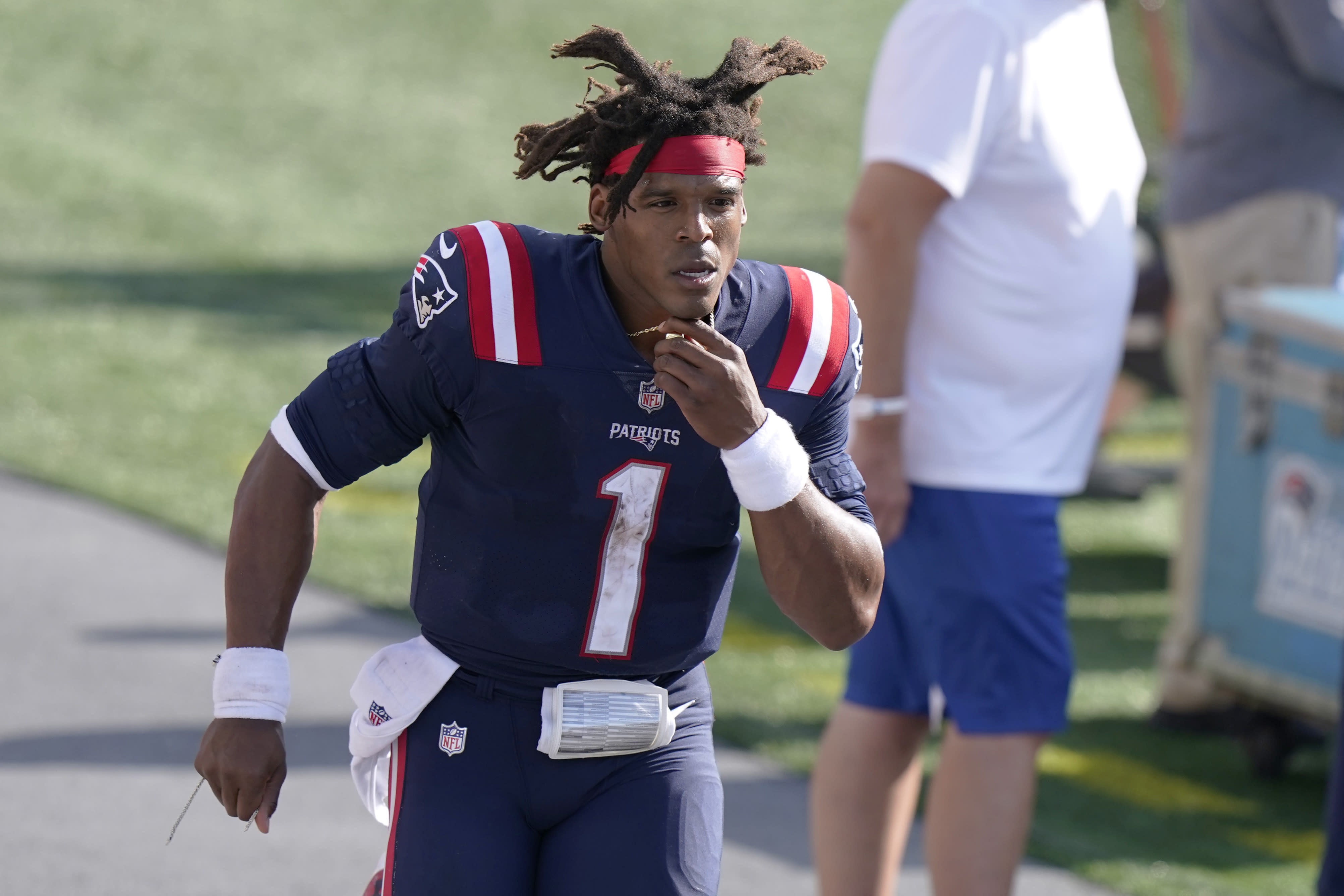 The joy on the big quarterback’s face was evident every time he reached the end zone Sunday.

The first time Cam Newton hit pay dirt, he looked back at his teammates, pointed to the ground and spiked the football. The second time he scored, he handed the ball to teammate David Andrews and yelled excitedly as his big center spiked it.

“This is the new normal, and I think it’s time for everybody — including myself — to realize this is what it’s like,” Newton said postgame Sunday. “I think it hit me full circle today, for me to realize I’m a New England Patriot, and I’m just going to embrace this whole moment.”

Newton’s new head coach, meanwhile, seems to be embracing it, too.

“Cam’s been great for us, he’s a very, very unselfish player, a great teammate, he’s earned everybody’s respect daily,” New England coach Bill Belichick said. “He puts himself last and puts his team first. I thought he played well today, he hit a lot of passes, ran the ball well, led the team and made some checks and adjustments.”

In the Patriots’ first game without Tom Brady since 1999, Newton was great Sunday, completing 15 of 19 passes for 155 yards and rushing 15 times for 75 yards and two touchdowns, his rushing tally the most from a Patriots quarterback in almost four decades.

Given his considerable injury history, it’s concerning that he could be seen grabbing his hamstring at the tail end of a postgame dustup in which he responded angrily to a Dolphins player grabbing the chain around his neck, though he said afterward that he felt fine.

“They were reaching for my chain, and I think that kind of got under my skin,” Newton explained.

Here’s the video for you when the chain was pulled off his neck and you can see it fall from Cam Newton hands. I would be pissed too 🤷🏾‍♂️ pic.twitter.com/amWYoZ0zGP

Newton’s fury in the moment didn’t bother me. If anything, it shows that for all the smiling he did on the field Sunday, his competitive fire still runs hot, and he knows he still has much to prove after an entire league disrespected him by passing on his services for three months.

“You just have to realize who you’re talking to and just keep everything in the game — I realize I was talking to a person who is known for doing splits, so that wasn’t characteristic of myself to keep going back and forth,” Newton said of his spat with Miami’s Christian Wilkins. “But at the end of the day, it’s football. I play with a competitive edge and I expect the other team to have a competitive edge as well, and at the end of the day, anything outside of that is about respect.

“We got the thing that was most valuable today, and that’s the win.”

Take the beginning of the game, when Newton’s first two carries as a Patriot came on zone reads, and his first pass came via play-action, an intermediate missile over the middle. And then, when Miami started stacking the line of scrimmage, Newton started using play-action and throwing missiles behind the linebackers for nice gains, proving his arm strength remains quite considerable even after multiple shoulder surgeries.

It carried on like this all Sunday, with New England controlling the contest by repeatedly pounding the Dolphins’ new-look defensive front and punishing them with play-action whenever they tried to anticipate it.

New England played a similar style — with great success — the past several years under Brady, minus the zone-read and quarterback run concepts Newton ran for years in Carolina.

Yet the fact Newton is still able to pull off those quarterback-run concepts in his 10th season is impressive. Some may have been worried that the 6-foot-5, 250-pounder may have lost some of his running magic, his combination of size and speed and strength, at age 31 after years of pounding and the injuries that come with it.

But on multiple occasions Sunday, Newton proved he hadn’t, which suggests New England will be difficult to stop in 2020, especially in short-yardage situations.

“That’s what we call situational football, and to us, it’s about responding,” Newton said.

Take one third-and-1 late in the third quarter, for example. The Dolphins jammed the line of scrimmage with bodies, anticipating another smash-mouth play, and blitzed the gaps. Offensive coordinator Josh McDaniels called a zone-read, which Newton kept, and he converted it with anticipation, power and sheer will.

It happened again later in the game, too, with the Patriots up three and facing a fourth-and-inches just inside the Dolphins’ 5-yard line. Once again, the Patriots lined up in shotgun and the Dolphins stuffed the line of scrimmage, this time with nine defenders. New England called QB power, the play Newton has arguably run better than any quarterback ever, and he converted a first down that ultimately led to a game-clinching score.

It was striking to see Newton — who also scored on a bootleg Sunday — execute plays like this in a Patriots uniform, concepts we haven’t seen regularly in New England when Brady was there. It must also be said they were playing the Dolphins, who are building something but aren’t there yet.

It also might have been proof that Belichick, who was interested in the sensational Lamar Jackson in the 2018 NFL draft, has long been ready to join the new wave of offenses, ones that featured quarterbacks who can run, throw and stress defenses in multiple ways.

Brady’s greatness allowed the Patriots to compete and win big, even as the game was changing. But I can’t help but wonder whether Belichick also knew that at some point, to beat the Patrick Mahomeses and Lamar Jacksons and Russell Wilsons of the world, he’d have to get a true run-pass threat of his own. In an extremely motivated Newton playing for a relative pittance this season, he may have found exactly that.

Now, none of this is to say the Patriots will go 16-0, or even win the Super Bowl. It will be interesting to see how Newton fares when the Patriots fall behind and defenses know he has to throw; this will be the ultimate test of his accuracy, pocket poise and kinship with his new targets.

Sunday’s opener was just one game, yes. But it’s clear that New England can go far on Newton’s massive shoulders in 2020. Let’s hope his body proves to be up to the task.

“It’s not necessarily pretty at times, but I think it’s good for the team character,” Newton said. “We’ve just got to keep building from this.”

How to watch the northern lights across far northern US tonight

Kap knelt alone so Bucks, others didn’t have to

How to get started with NFL fantasy football

What The 2020 House Elections Could Mean For The 2022 Midterms