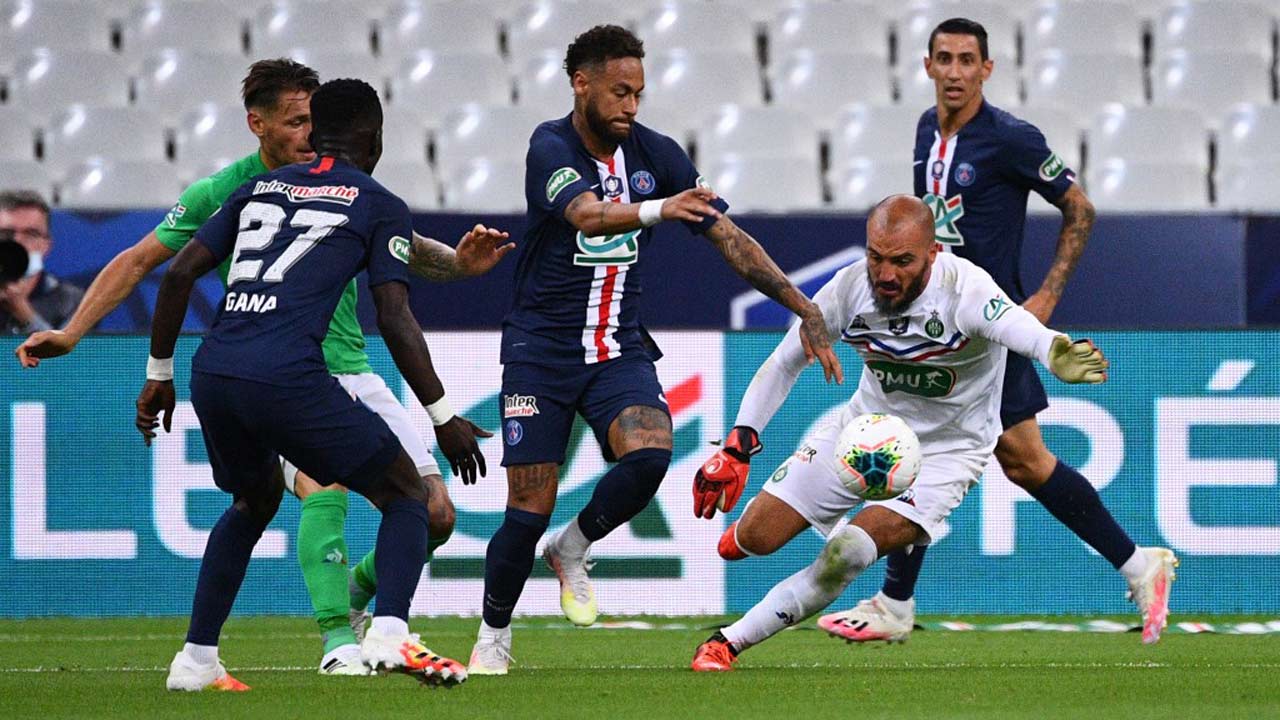 Neymar scored the winning goal as Paris Saint-Germain defeated 10-man Saint-Etienne 1-0 in the French Cup final on Friday, the first competitive fixture in the country since March 11 following the coronavirus pandemic.

However, coach Thomas Tuchel faces an anxious wait over the fitness of Kylian Mbappe ahead of next month’s Champions League quarter-final after the France star limped off during the first half with an ankle injury.

The World Cup winner was later seen in the tunnel on crutches.

PSG secured the first of a potential three trophies this summer, added a record-extending 13th French Cup to their list of honours with the League Cup final against Lyon to come next Friday before the resumption of their European campaign in Portugal.

The final at the Stade de France was the first official match in one of Europe’s top football nations to allow fans to attend since March, albeit in severely restricted numbers with just 2,805 spectators — including President Emmanuel Macron — inside the 80,000-seater venue.

A minute’s applause was held ahead of kick-off for the victims of COVID-19, which has claimed the lives of over 30,000 people in France, and in support of frontline workers.

PSG had racked up 20 goals without reply in three friendlies building up to the final, but Yvann Macon’s crunching tackle on Neymar in the first minute suggested no such goodwill would be afforded by Saint-Etienne in their first French Cup final appearance since 1982.

The challenge set the tone for a fractious opening period and Denis Bouanga was inches from firing Saint-Etienne ahead when his strike rebounded back off Keylor Navas’s left-hand post.

Neymar slams home
Unfazed by that scare, PSG led on 14 minutes as Mbappe burst into the area after an exchange with Angel Di Maria and Neymar crashed home the rebound via the underside of the crossbar after a fine save from Jessy Moulin.

Bouanga twice forced Navas to turn away while Moulin produced a sensational one-handed stop to tip over from Di Maria, earning plaudits from the Argentine himself.

Saint-Etienne’s hopes of fighting back were deeply hampered midway through the first half though when captain Loic Perrin, on likely his final appearance for the club, was sent off for a dreadful challenge on Mbappe.

The World Cup winner required lengthy treatment but was forced off after his right ankle was trapped between the legs of Perrin, whose yellow card was upgraded to red following a VAR review.

Emotions boiled over with five players booked in the aftermath following an ugly melee, but the greater concern for PSG will be the severity of Mbappe’s injury.

The France star reemerged from the tunnel on crutches in the second half, with less than three weeks before PSG’s Champions League tie against Atalanta on August 12.

Moulin kept Saint-Etienne in with a remote shot of ending their 43-year wait for a seventh French Cup title, repelling Mauro Icardi and Di Maria before spreading himself superbly to deny Pablo Sarabia.

The goalkeeper even raced forward for a late corner but PSG held firm to atone for last year’s defeat in the final by Rennes on penalties, clinching the trophy for the fifth time in the past six seasons.

Employers are pissed people won’t risk their lives for $8.50 an hour

Your Employee’s Stress is Stressing You Out. Now What?

My sister took care of our parents, and kept their $80K savings when they died. Now…

Bitcoin Prices in 2020: Here’s What Happened

The friendliest cities in Europe