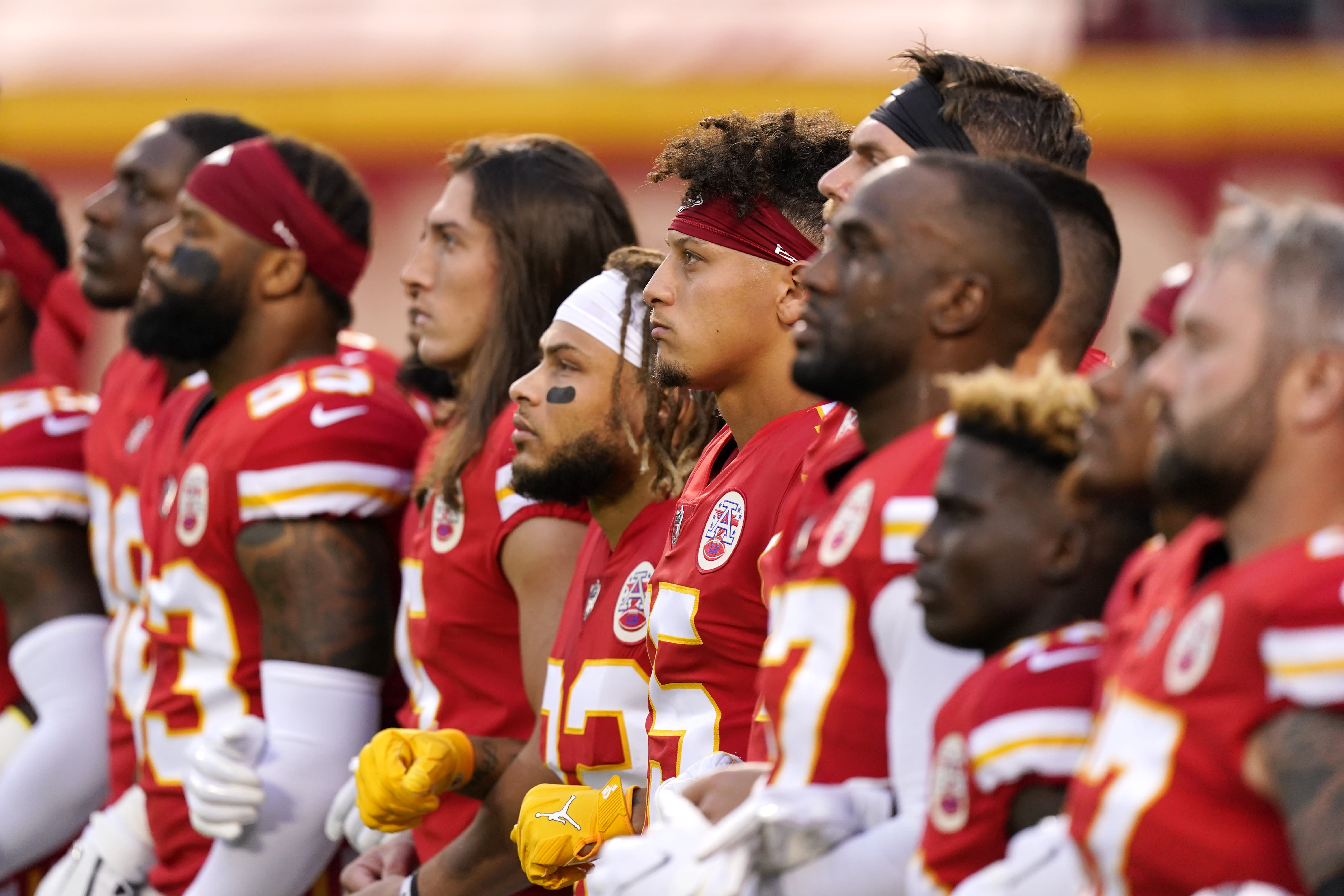 At Thursday’s NFL season opener, the Houston Texans stayed in their locker room for both the pregame playing of “The Star-Spangled Banner” and “Lift Every Voice and Sing,” which is often called the Black national anthem.

The Kansas City Chiefs, meanwhile, were on the field for both songs. The defending Super Bowl champions stood on their sideline during the national anthem, many with arms linked. Defensive end Alex Okafor appeared to be the lone player who kneeled. All stood on a goal line for Alicia Keys’ performance of “Lift Every Voice and Sing.”

When Houston eventually took the field, the respective quarterbacks for both teams, the Chiefs’ Patrick Mahomes and the Texans’ Deshaun Watson, organized a lineup of all the players. They stood with arms linked during a moment of silence.

Some boos from the COVID-downsized crowd at Arrowhead Stadium were audible.

The fact that players standing together during a moment of silence would cause such a reaction from some of the sport’s most devoted fans is one reason the NFL has seemingly stopped worrying about everyone’s opinions.

It was a few seconds of respectful demonstration.

And yet still, some objected to it occurring, objected to the quiet views and simple actions of no less than Mahomes and his teammates, who had delivered the city a long-awaited Super Bowl. If that isn’t a reasonable or peaceful enough of a “protest” then it’s not what the players are doing, but the fact they are doing anything at all.

During the moment of unity between the Texans and Chiefs, some fans responded by booing.pic.twitter.com/qRnle1XiJg

This was the culmination of an issues-heavy run-up to the traditional season kickoff. The offseason was overshadowed by the coronavirus pandemic and civil unrest following multiple high-profile incidents involving African Americans and the police.

The NBC pregame show was full of segments and videos promoting activism and social justice efforts. The phrases “It Takes All Of Us” and “End Racism” were painted behind each end zone. An NFL video promoting social justice also played on the big screen.

This was the NFL leaning into the promotion of social justice causes just a few years after a kneeling Colin Kaepernick, and heavy criticism from Donald Trump and a segment of fans, had left the league rocked and reeling.

If nothing else, the scene Thursday, which is expected to play out in various ways across the league this weekend and beyond, is a sign that the NFL is no longer afraid of the backlash from disillusioned fans or Trump himself.

This is how it’s going to be, the NFL is saying. Take it or leave it.

“I’m going to do whatever I believe is right,” Mahomes, arguably the most popular player in the league said earlier this week. “… I’m not worried about people and how they are going to do negative stuff back to me. I’m worried about doing what’s right for humanity and for all people to feel equal.”

“We aren’t here to make political statements,” Goodell continued. “We are here to make our communities better.”

Essentially, somewhere along the way, the NFL stopped caring (or caring as much) about the politics of the politics.

Whether that’s a smart strategy remains to be seen. There will be an impact not just on the NFL season and its viewership numbers, but perhaps the 2020 election, where Trump, no doubt, would love to shift the focus away from his response to the coronavirus and onto a good, old-fashioned culture war wedge issue.

This is a sea change for the league. In 2017, Trump owned the league’s franchise owners, bullying even ones who felt the league could do more to stand up for their kneeling players. Television ratings were adversely impacted as a result.

“The problem we have is, we have a president who will use that as fodder to do his mission that I don’t feel is in the best interests of America,” said New England Patriots owner Robert Kraft during a meeting between franchise owners and players in Manhattan. A tape of that conversation was released in 2018 to The New York Times.

Kraft is, mind you, a longtime friend and supporter, both financially and otherwise, of Trump.

“We’ve got to be careful not to be baited by Trump or whomever else,” said Philadelphia Eagles owner Jeffrey Lurie. “We have to find a way to not be divided and not get baited.” Lurie later called Trump’s presidency “disastrous.”

The NFL tolerated player actions and funded important initiatives for social justice and criminal reform. Yet the support always felt uneasy. No one wanted to lean into the fight.

Maybe it was just the years of getting criticized by Trump that the insults and tweets have lost their sting. Or maybe it was the focus on tangible issues that came from the May 2020 death of George Floyd. Or maybe it’s the league catering to shifting sentiments in America, especially younger Americans who are the NFL future (if not present) consumer base.

Or perhaps it’s a different perspective from a new generation of players (many of whom were in college when Kaepernick took a knee), coaches (a dozen are 45 or under, including five in their 30s) and even team owners.

Carolina’s Jerry Richardson, who noted in 2017 that “politicizing the game is damaging,” sold his share of the Panthers in 2018. Then, there was the Houston Texans’ Robert McNair, who in the meeting asked players to get their peers to stop kneeling in an attempt to appease Trump.

“You fellas need to ask your compadres, fellas, stop that other business, let’s go out and do something that really produces positive results, and we’ll help you,” McNair said.

Whatever it is, the change has been dramatic. Kaepernick may not be on a roster, but Goodell apologized this summer for not listening to him at the time. That was unthinkable in 2017.

So the league has shifted. But has the public?

A poll commissioned by the Washington Post that was released Thursday shows that 56 percent of Americans say it is “appropriate” to kneel during the anthem while 42 percent disagree.

That’s one thing if this was an election, 56 beats 42 every time. It’s not necessarily if you are running a business. That’s a lot of opposition, and it promises to be vocal and determined. Some fans will rage against the league and stop watching. There is no doubt.

The NFL, like other professional sports, has determined that it will live with that. Playing the middle of the road got it hit from both sides. So the league made a choice.

The same poll notes that about 70 percent of adults under the age of 50 say “professional athletes should use their platforms to express their views.” That’s the generation of the future, or even present. The numbers may even be higher in the urban and suburban markets where teams mostly reside.

So let the season, and the protests begin. There will be boos and boycotts, there will also be applause and support. This is the side the NFL has chosen, one where it stands with its players for social change in America.

If nothing else, a once-petrified group of team owners is no longer scared of Trump or much else.

At least for now.

These Are The World’s Most Troubling Hotspots of Vaccine Hesitancy

Samsung’s “Galaxy Buds Beyond” should get helpful feature

This is the Strategy to Getting Any Job You Want

Why Small Business Owners Need to Reconnect With Their Mission

AstraZeneca Paused Its COVID-19 Vaccine Trial to Perform a Safety Review. That’s Not…

How Are Social Security Benefits Affected by Your Income?

Lake-to-lake bicycle route to be built in Penticton