NFL Winners and Losers: Jets go from bad to worse 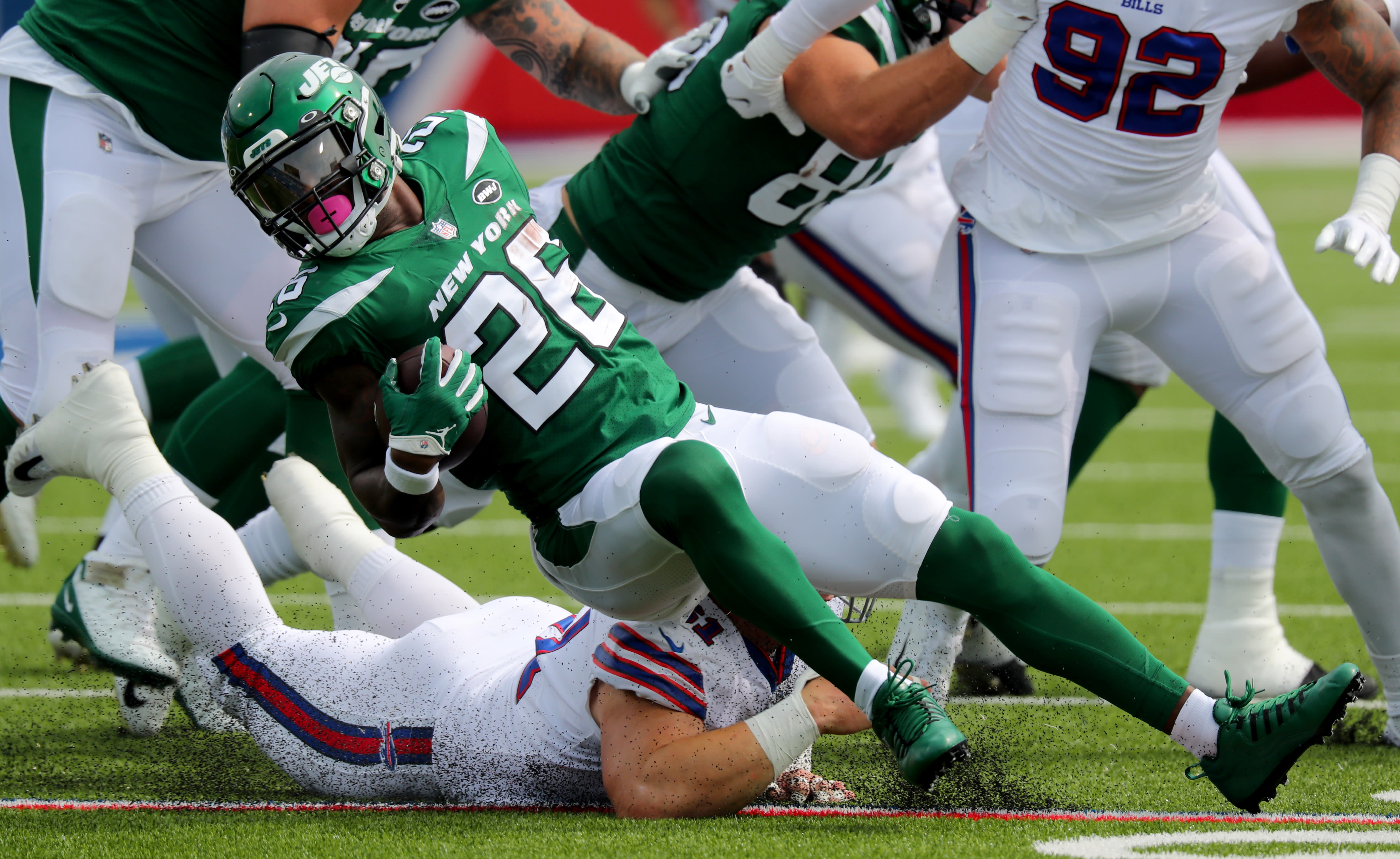 Two fair questions emerged from the New York Jets’ camp in the first half of the season opener.

Does Trevor Lawrence like New York? And who will be his coach?

It’s early. There were a few bad performances as the NFL kicked off the season (Cleveland Browns say hello). But the worst team in Week 1 was either the Jets or Browns, and at least there should be a little hope for the Browns to turn it around.

The Jets were down 21-3 at the half to the Buffalo Bills, and it should have been worse. Josh Allen fumbled twice in Jets territory, which was pretty much the only time he looked stressed. Nobody really expected the Jets to be good. But this bad? Other than one nice catch-and-run by Jamison Crowder for a touchdown through a ton of missed tackles, the Jets had little to feel good about.

Adam Gase probably shouldn’t have gotten a second chance right away after failing with the Miami Dolphins, there were some serious red flags when his temper tantrums in the 2019 offseason led to the dismissal of general manager Mike Maccagnan, and then there were more grumblings of him not being overly popular with players. All that wouldn’t matter if the Jets were winning games, but that hasn’t happened.

Gase is supposed to be an offensive mastermind, but that reputation is still from a 2013 season with Peyton Manning. Manning could make a lot of coaches look better than they are. Jets quarterback Sam Darnold hasn’t developed much since he was the third pick of the draft. It’s hard to say if that’s on him or a poor situation with the Jets, but clearly coaching and roster construction around him hasn’t helped. Darnold doesn’t have much talent around him, and it’s not like Gase is getting the most out of the talent he does have. Still, Darnold threw an awful interception, drifting to his left and throwing back across to the middle of the field, that no NFL quarterback should ever make. His throw late in the first half to a wide-open Le’Veon Bell, when Bell stumbled to the ground and an easy touchdown turned into an incompletion, won’t go on a highlight reel either.

Things change over the course of a season. The Miami Dolphins looked like the worst team in NFL history through September last season, and they were not even the worst team in the league last season. Miami got the fifth pick of the draft. But the Jets looked like perhaps the NFL’s worst team in Week 1. Lawrence, the quarterback from Clemson, is the prize of the 2021 draft, and the Jets will be a contender to get the first pick. If that happens, it would be hard to see the Jets passing on him if Darnold doesn’t get better.

And it’s impossible to imagine Gase would be coaching Lawrence. It’s way too early to have these conversations in a 16-game season, but the Jets looked that bad in the opener.

Here are the rest of the winners and losers from Week 1 of the NFL season:

New Orleans ruined Tom Brady’s Tampa debut, pulling away after the Bucs scored the first touchdown of the game. Janoris Jenkins’ pick-six of Brady was the turning point in the win, which was decisive for the defending NFC South champs.

The Buccaneers have a lot of talent and will be better when Mike Evans is healthy. But the Saints are loaded. They didn’t even play that well — Michael Thomas was quieted by the Bucs defense (and came off limping near the end) and Drew Brees was well under 200 yards passing — but they’re so deep that they can still beat a team that is also expected to contend for a Super Bowl berth.

The much-anticipated first round of the Brady-Brees battle this season went to New Orleans. The Saints are still the team to beat in the division.

Let’s also credit the Cardinals for making what might be a franchise-changing trade.

Hopkins went off in the Cardinals’ upset win over the defending NFC champion San Francisco 49ers. He had a career-best 14 catches for 151 yards. He and Kyler Murray are best friends already.

Hopkins is the kind of player who very, very rarely becomes available at a prime age. That’s why it was crazy for the Texans to trade him. The Cardinals added a player that might loom very large in the NFC West this season.

But Jackson is just fine. The Baltimore Ravens quarterback had 208 yards on 13-of-17 passing and two touchdowns at the half in a 38-6 win against the Cleveland Browns. He finished with 275 yards and three touchdowns, and probably could have done more if the Browns were more competitive. The Ravens looked just as dominant on Sunday as they did all of last regular season. Nobody has or will figure out how to stop their unique offense. Their defense is still menacing, too.

The Ravens will have to prove themselves in the playoffs after two straight one-and-done exits. But there’s no mistaking after one week, Jackson is still one of the best players in the game and the Ravens will be Super Bowl contenders again.

Wilson looked phenomenal and the Seahawks rolled the Atlanta Falcons 38-25. By the time the Seahawks had a 24-21 lead, Wilson was 21 of 24 for 183 yards, four touchdowns and no interceptions.

Wilson can put up a huge season if the Seahawks lean on him a little more. Seattle likes to run the ball despite having a future Hall of Fame quarterback, but it was a pass-heavy approach on Sunday. Maybe that was a game plan specifically for the Falcons and their porous defense, but perhaps it’s an epiphany either way. Wilson has D.K. Metcalf and Tyler Lockett to throw to, and he’s playing as well as ever. Maybe what we saw Sunday was the first step toward his first MVP season.

The Green Bay Packers stood pat at receiver in the offseason, but it didn’t matter Sunday. Even when teams know Adams is getting the ball, they can’t stop it. Rodgers looked sharp and Adams was dominant, as they blew past the Minnesota Vikings 43-34 in a key Week 1 NFC North showdown.

The Packers had an offseason that was criticized by mostly everyone, especially after they drafted quarterback Jordan Love in the first round. But Rodgers hasn’t fallen that far, and Adams is still among the best players in the league. Perhaps that’s enough. Green Bay’s offense looked great on Sunday.

The Raiders won a thoroughly entertaining game against the Carolina Panthers 34-30, getting a crucial stop on fourth-and-inches with 1:11 remaining. Clelin Ferrell, the third pick of the 2019 draft, led the charge to get the stop.

The Raiders looked pretty good. Josh Jacobs ran for three touchdowns. Derek Carr made some nice throws, including a beautiful touchdown lob to Nelson Agholor. Rookie first-round pick Henry Ruggs III was used often in the first half, before he left for a while due to injury.

Sin City is 1-0 in the NFL. Las Vegas might be a pretty fun team to watch this season.

Joe Burrow’s debut was looking like it could have a storybook ending. Trailing 16-13, Burrow drove the Bengals inside the red zone in the final seconds. He hit Green for what looked like it would be the game-winning touchdown. But Green was called for pushing off the cornerback and the pass interference call wiped out the score. No problem though, Bullock could hit the game-tying chip shot and …

Bullock missed a 31-yard field goal wide right and might have injured himself in the process. The Bengals went from a legendary win in Burrow’s first game to not even making it to overtime. That’s a rough way to start the season.

The Ravens are very good and their defense is one of the NFL’s best. Still, Mayfield was simply not good enough on Sunday.

Mayfield struggled to move the ball against the Ravens. He threw for just 189 yards on 39 attempts. He has become far too impatient in the pocket, looking to flee even when there’s no pressure. Kevin Stefanski’s offensive scheme isn’t going to work if Mayfield is bailing on plays before they can develop. The Browns won’t face the Ravens every week so it should get easier going forward, but Mayfield’s third season didn’t start in a way that leads to much optimism.

Yet, losing 27-17 to the Washington Football Team is not a good way to start the season, even if they had excuses.

The Eagles looked good early, but a couple of interceptions by Carson Wentz changed the game. The Eagles’ offense, without Miles Sanders, Lane Johnson, Alshon Jeffery and others, bogged down. Washington’s rush got after Wentz and they went from trailing 17-0 to winning 27-17.

Washington might be slightly better than expected, but probably not much. This is not a loss that will age well, injuries or not.

The Patriots, who lost a lot on both sides of the ball in the offseason, played a strong game in beating the Dolphins. The defense made some big plays, and Cam Newton looked effective in his old role as a dual-threat superstar. Newton rushed for 75 yards and two touchdowns on 15 carries.

The Patriots aren’t going to fade away quite yet. The Bills-Patriots AFC East race might be one of the best in the NFL this season.

The Colts had one of the more shocking losses of Week 1, falling 27-20 to the Jacksonville Jaguars. The Jaguars came into the season looking like one of the worst teams in the NFL. So what does that make the Colts?

Rivers, who looked like he might be in steep decline last season, was outplayed by Gardner Minshew II. Rivers’ bad interception with less than five minutes left, with the Jaguars leading 24-20, was a crushing blow. The Colts still had one more shot trailing 27-20 and moved into Jaguars territory, but Rivers’ fourth-down pass to T.Y. Hilton was knocked down.

The Colts lost running back Marlon Mack, which hurts what they expected to be a 1-2 punch with Jonathan Taylor. That might put even more on Rivers’ shoulders. That might not be the best path.

Montreal to open homeless shelter with supervised alcohol consumption in 2021

Sentences to ponder model this

15 Best Things To Do In Atlanta

This Startup Is Making Fully Edible ‘Plastic’ Sauce Packets Out of…

You would have to tread very carefully: Like Peter Thiel, you too can turn your Roth…

The unintended consequence of becoming empathetic

Bad News: Stimulus Check Stealing Could Land You in Jail