Nolte: BLM Riots Are Officially the Most Costly Manmade Damage to American Property in History 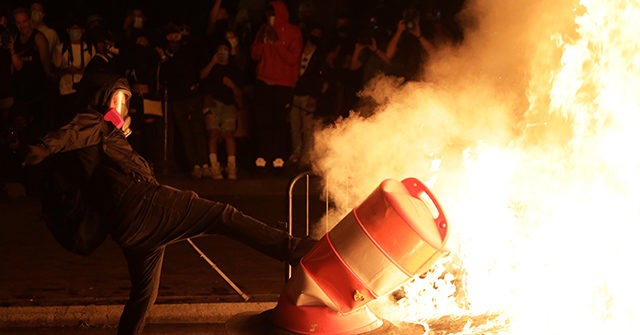 The domestic terrorists in Antifa and Black Lives Matter have accomplished one thing: the most costly riots in the history of our country, reports the far-left Axios.

Property Claim Services, a company that tracks insurance claims filed due to riots and the like, found that the left-wing riots that occurred between May 26 and June 8 of this year could reach $ 2 billion in insurance claims.

Obviously, because the left’s domestic terrorism extended well beyond June 8 and is still ongoing, the company acknowledges “this is still happening, so the losses could be significantly more.”

Most importantly, these estimates are all being compared based on 2020 dollars. Meaning, previous riots, like the 1992 Rodney King Riots in Los Angeles, cost $ 775 million in 1992 dollars. That adds up to $ 1.42 billion today, which is still lower than the $ 2 billion Black Lives Matter Riots estimate — which again only covers eight or nine days of rioting that has never really stopped.

Here’s a piece of perspective that shocked even me…

If you add up the insurance cost in 2020 dollars for all six major American riots during the turbulent 1960s, the total is a little shy of $ 1.2 billion — which means the terrorists in Antifa and Black Lives Matter caused more mayhem and property damage in a little over a week than this country saw throughout the 1960s.

To the surprise of no one, Axios still uses the term “mostly peaceful” to describe what’s happening.

There’s also this helpful non sequitur: “Yes, but: These losses are small compared with those stemming from natural disasters like hurricanes and the wildfires that are consuming the U.S. West.” [emphasis original]

So even in the face of all this murder, property damage, assaults, looting, and burning, the clown show at Axios proudly marches onward.

Another thing to keep in mind is that these estimates are based only on insurance claims, so near the bottom of the piece, we’re told: “U.S. companies have learned the hard way that their insurance doesn’t cover business interruption related to the coronavirus, most policies emphatically do cover riot-related losses.”

In other words, that astronomical number isn’t estimating total damage, just the damage that’s insured. So while the number is not helpful in estimating the total damage, it is still a good apples-to-apples comparison with past riots, since all the calculations are based on insurance claims.

If Trump wins re-election in November, you ain’t seen nothing yet. The rioting and terrorism will be off the charts.

The national media are not even being subtle in threatening more riots if Joe Biden loses:

A loss by Joe Biden under these circumstances is the worst case not because Trump will destroy America (he can’t), but because it is the outcome most likely to undermine faith in democracy, resulting in more of the social unrest and street battles that cities including Portland, Oregon, and Seattle have seen in recent months. For this reason, strictly law-and-order Republicans who have responded in dismay to scenes of rioting and looting have an interest in Biden winning—even if they could never bring themselves to vote for him.

The far-left Atlantic published that last week (I don’t link anything that blackmails voters using threats of violence).

A landslide for Joe Biden resulted in a relatively orderly transfer of power. Every other scenario we looked at involved street-level violence and political crisis.

That unveiled threat came from the far-left Washington Post at the beginning of the month.

If Biden wins, the Democrats, the media, and their Brownshirts in Antifa and Black Lives Matter will have had their terrorism validated.

We have never lived in a country where political violence has been normalized and encouraged.

Over half of Covid hospitalisations only tested positive AFTER admission

How Reliable is Government Information?

Shades of Berkovic: Hammond must duck from Celtic swoop for Glasgow-born £3.6m target…

Our Interpreter Saved My Life. We Need to Save His