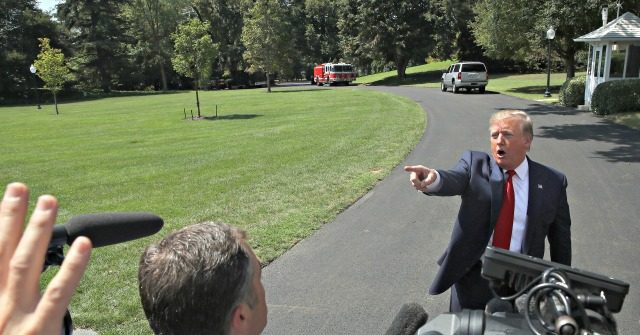 “Did you mislead the public?” Bob Woodward asked President Trump during one of their 18 — 18! — in-depth interviews between December of 2019  and July of this year. Interviews recorded with Trump’s permission.

Trump’s answer during one of those 18 — 18! — interviews recorded by the same fake media he rails against…?  “Well, I think if you said in order to reduce panic, perhaps that’s so. The fact is, I’m a cheerleader for this country. I love our country and I don’t want people to be frightened. I don’t want to create panic.”

Did you mislead the public, Mr. President?

Perhaps. Perhaps that’s so. Perhaps I did.

Does Trump want to get re-elected?

I get it. I do. I get why he downplayed the China Virus. I do.  I also get that behind the scenes things were getting mobilized. I get that Dr. Fauci is vouching for him. I get that. And I get that his response to the coronavirus, his management of the crisis, was about as good as could be expected. I get all that.

And when I say “his management of the crisis,” that’s me being specific about nuts and bolts. Trump’s communication was a train wreck, a catastrophe that undermined good work. Trump’s endless, interminable press conferences, his personal grudge matches with the useless nitwits in the White House press corps. Him making everything about him as people died and the economy rolled over dead.

It killed his job approval numbers. Put his re-election in jeopardy. He knew that and still he’s jabbering away with Bob Woodward straight through to July.

What I don’t get is why Trump’s howling about the fake media in MAGA World while, behind our backs, he’s doing business with the likes of Bob Woodward. And doing so on the record, like we’re so in his pocket, we’ll just swallow something like that.

Listen, we’re not talking about surrendering to an interview or to a few questions here. Trump has to do that. He’s the president. What we’re talking about is 18 — 18!– recorded interviews over eight months. That’s not submitting to the realities of the job. That’s doing business. That’s Trump telling us one thing to our face and playing in the swamp behind our back.

Is Trump star-struck by Woodward? Is Trump so in awe of his own charm, he thought he could do what exactly? Charm the prince of darkness?

How many New Media outlets — outlets that would be tough but fair — would not only write a tough but fair history of the president’s handling of the coronavirus, but after being given that kind of access to Trump, would have served the public better with the end-product?

Oh, and now Trump’s in another jackpot because he’s a president of the United  States who’s on tape saying “perhaps” he misled the American people.

Every fair-minded person understands the nuance behind what Trump said there, what he meant, including Woodward, which is why Woodward felt no need to go public at the time, which is why it’s ridiculous to make this about that.

That’s not the point…

The point is Trump’s incompetence. Not only in agreeing to these interviews, but in shooting his mouth off like that.

The point is we’re less than two months from a highly consequential presidential election and thanks to Trump we’ve just entered another exhausting and completely unnecessary round of Not this shit again.

The point is welcome more tiresome drama in a never-ending drama.

The point is that he’s playing pattycake with the fake media when he could be using his time and presidential authority to boost New Media. To freeze out the godkess liars. Starve ’em. Diminish ’em. Stick ’em in the back row. I’m not just talking about Breitbart News. I’m talking about any of us.

Imagine if the president of the United States snubbed the fake news and offered this history to one of us. That would be a game-changer. He didn’t do it, though, did he? No, he took Bob Woodward’s calls.

This is all on Trump, and if after a pretty successful first term, he still manages to lose to a corrupt old fossil incapable of even reading off a teleprompter, a senile, racist figurehead who will usher in an era of blacklisting and riots, this will be why… A staggering amount of hubris, a staggering lack of discipline, and taking his base for granted.

Yeah, I’m still gunna vote for him. Course I am. The election isn’t about me, it’s about the country. I just wish Trump wouldn’t sometimes forget that.

Trillions of Dollars of Retirement Wealth Have Been Mislaid

Were Updating the Asset Allocation for Wealthfronts Recommended Portfolios

What channel is USA Network? How to watch Notre Dame-Clemson during Joe Biden’s…

Republican Evolution Into Authoritarianism Will Go On

Gil could be Nuno’s next Neto at Spurs

Flashback: a brief history of Bluetooth