Commercial satellite imagery over the past year indicates that the light activity observed throughout North Korea’s Yongbyon Nuclear Scientific Research Center goes beyond a caretaker status. Specifically, the cyclical reappearance of specialized railcars and the occasional presence of possible liquid nitrogen (LN) tanker trailer at the Uranium Enrichment Plant (UEP), suggests continued enrichment operations. Additionally, construction has been ongoing around the Main Research and Administrative Headquarters Area. Despite this activity, there has been no evidence to suggest either the 5 MWe Reactor or the Experimental Light Water Reactor (ELWR) have been operating.

Activity around the Uranium Enrichment Plant and probable Radioisotope Production Facility has generally been low over the past year, limited to the occasional observation of a few vehicles and/or trailers. However, the continued reappearance of three to four specialized rail flatcars throughout the complex, and especially at the spur servicing these facilities, is evidence of some level of activity beyond caretaking.

Most recently, imagery from July 8 revealed the newly arrived presence of three specialized railcars were observed in the rail yard in an area of Bungang-ni (Pungang-ni) located immediately west of the Yongbyon reactor area, which provides support to the nuclear complex. The railcars were not observed on July 22. Prior to this, they were last observed at the UEP rail spur in February.

The flatcars are usually configured to hold between four to five cylindrical containers whose contents remain unknown. Their presence at Yongbyon is cyclical, arriving every few months, three to four times a year, and remaining for a couple of weeks at a time. This pattern suggests some type of ongoing operation within these facilities, which requires the removal or receipt of some unidentified chemical agents.

In addition to the specialized railcars, a possible LN tanker trailer has appeared at the far west end of the UEP at irregular intervals, most recently arriving sometime between July 11 and 14. Liquid nitrogen is necessary for operating cold traps in the uranium enrichment process and running vacuum pumps. Replenishment of the LN would be necessary to maintain continued centrifuge operations.

There have also been recent changes to the bank of cooling units located at the west end of the centrifuge building. On March 11, there were six units in place but by April 11, one unit (the second from the south end) had been removed, and as of July 22 had not yet been replaced. It is unclear whether the cooling unit failed and was removed for either repair or replacement, or whether it was removed for some other reason. It is also unclear what impact the presumably temporary reduced cooling capacity has had on the UEP’s operations. 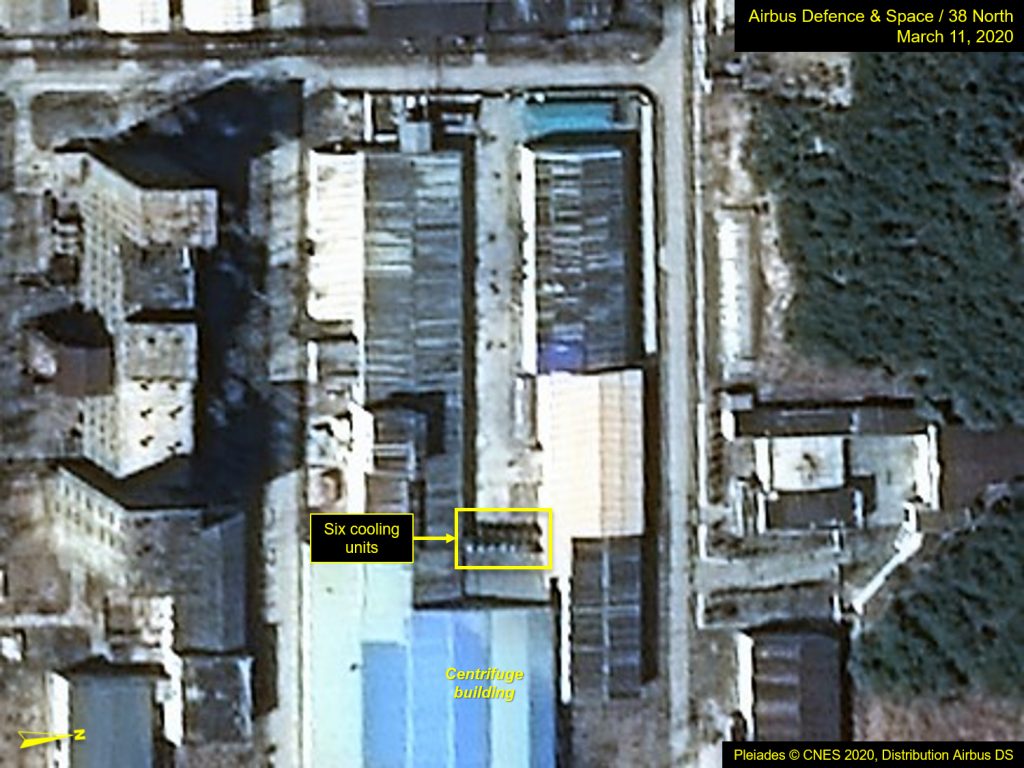 Over the past year, the Main Research and Administrative Headquarters Area has and continues to undergo modest changes. One single-story, peaked-roof building was razed and replaced by a new single-story, flat-roofed building of unknown function late last year near the probable ELWR fuel fabrication building, and another building next to an administration/engineering building was razed in March 2020 and subsequently replaced by another. In addition, construction on two other multi-story buildings, which had been languishing for more than a year, is now moving forward toward completion.

Figure 4. Buildings under construction in the Main Research and Administrative Headquarters Area.

On July 4, three trucks and a small utility vehicle were observed next to or near the 5 MWe Reactor. It has been typical to see one to four vehicles parked near the reactor over the past year. Similarly, vehicles are occasionally observed near the ELWR and/or at the adjacent engineering office building. However, there are currently no indications that either reactor is operating, such as steam emissions from the generator halls or cooling water discharges associated with either of the two pump houses servicing the complex. Dredging along the riverbank has been conducted throughout this period as the North Koreans continue to build up the embankment, presumably to manage seasonal floodwaters.

Wang Yi: China will react firmly and rationally to peremptory US acts

We thought our eyes turned off when moving quickly, but that’s wrong

Grounded – A Closer Look at Life in the Backyard

The secret to Australia’s success in beating the coronavirus? Being an island helps.

Congratulations, entrepreneurs! Today is the International Day of SMEs

Quebec fact of the day

Important Factors to Consider Before Franchising Your Business

Naledi Nyahuma Seck joins The Orchard as Vice President of Diversity, Equity and…