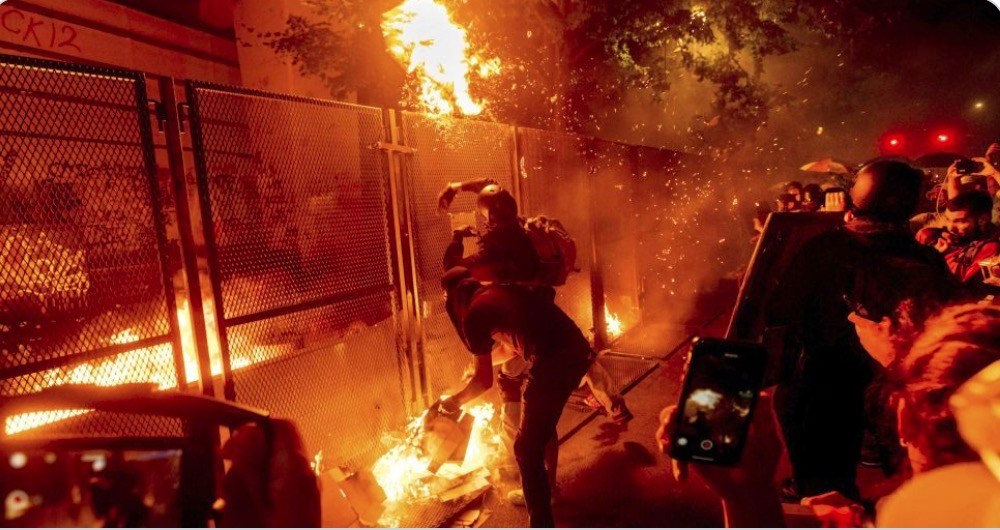 If these Mayors had control of their cities and allowed police to do their jobs, none of this would be happening.

Rep. Nancy Pelosi should know that mayors of these cities are supposed to protect the cities and the people, not letting thugs run around destroying businesses, homes or public buildings. That is a dereliction of their duty.

Commissioner @JoAnnPDX and I are calling for an immediate meeting with Department of Homeland Security leadership on the ground in Portland and with Acting Secretary @DHS_Wolf to discuss a cease-fire and the removal of heightened federal forces from Portland.

Have you seen the destruction in these Democratic-run cities? It’s horrible, and the mayors are allowing it to happen. If history is any precedent, these downtown areas may never recover. A lot of people are losing their livelihoods.

These are not the actions of a democratic [email protected]’s actions in Portland undermine its mission.

Trump & his stormtroopers must be stopped.

I believe there is an element in the belly of the Democratic Party that wants a civil war among the people. They have sort of won the battle with the police, who are now beaten down and afraid to enforce the law. The next step is to pick a fight with ordinary law-abiding citizens, not necessarily a race war but a war of opposing thought it’s coming, so be ready.

A Portland Black Lives Matter organizer announced the group’s intention to “abolish” the “United States as we know it” during a rally outside the federal courthouse. The self-described “afro-indigenous non-binary local organizer” named Lilith Sinclair admitted to supporters outside the Hatfield Federal Courthouse what the mainstream media is keen to ignore: that Black Lives Matter is not about racial equality or police reform, but the total abolition of America itself.

“I’m an afro-indigenous non-binary local organizer here in Portland,” Sinclair told the audience. “Organizing for the abolition of not just the militarized police state but also the United States as we know it.”

DEMS HAVE IT ALL PLANNED OUT

Of course, these Democratic leaders don’t want federal forces sent to get their cities in order. This is the way they have planned to present Trump as not being in control of the country. Then if they do manage to get him out of office, they plan to have all of us spending our money on putting up all-new infrastructure, buildings, etc. in these cities they are allowing the protestors to burn and tear down.

There are dozens of Federal Laws passed by both Democrats and Republicans that allow the President to exert Federal Authority over states, cities, counties, boroughs, villages, etc. if Federal property is in danger and the citizenry. There have already been deaths attributed to these domestic anarchist terrorists. It is a national emergency. No local law will ever override the Federal Laws that apply to this scenario.

Sorry, but you can’t prevent the feds from protecting their property. That’s all they’re doing, and these crybaby animals are mad because they can’t destroy something. It isn’t surprising the liberals are trying to help create more chaos.

There are Federal properties in every state. No law will ever be passed, barring Federal law enforcement officers from protecting those properties or investigating Federal crimes. The idiocy of left-wing politicians is infinite. If they put as much energy into protecting their cities as they do attack Trump, there would be no more riots.

I cannot imagine being a taxpayer in one of these cities. Property values in the surrounding suburbs and rural areas must be exploding.

FINAL SOLUTION TO THE RIOTS

Here are a few solutions to the rioting and destruction at the hands of these anarchists. These cities should be left to burn to the ground. I know it’s harsh, but that’s what they want.

If the local people want to support Law and Order, make them prove it. If they’re going to allow Burn Loot Murder thugs and Aunt-iffy cowards loose in the city, then let them have what they want. Maybe once enough lives have been taken, livelihoods destroyed, personal and public property damaged, common sense, and a desire to survive might grab hold.

Not one Fed taxpayer dollar to these cities in any form. Let these moron mayors pay for the carnage by taxing their citizens more. Let some brilliant patriotic local lawyers sue these mayors for violating their oath of office.

If local people want change, let them vote for it. Otherwise, leave them to their choices.

Mothers-to-be infected with HPV are FOUR TIMES more likely to have a premature baby,…

Why Richard Branson’s Spaceflight Is a Very Big Deal

‘When People Are Able to Make Choices without Government Interference… We…

Jalen Hurts Fantasy Outlook: Will rookie QB get playing time for Eagles in 2020?

Google launches the Pixel 5 and 4a 5G with Snapdragon 765G, 5G and ultrawide cameras

Report: Dozens Of Shots Fired At George Floyd Square On Anniversary Of His Death

Networks: Trump Is ‘Bulldozing…American Democracy’ with ‘Stunning Words’ on…