Officer challenges official account of rout against US protesters

The United States Park Police began the violent clearing of protesters from Lafayette Square last month without apparent provocation or adequate warning to demonstrators, immediately after Attorney General William Barr spoke with Park Police leaders, according to an Army National Guard officer who was there.

The account of Army National Guard Major Adam DeMarco has challenged key aspects of the Trump administration’s explanation for the clearing of the protest in front of the White House, just before President Donald Trump walked through the area to stage a photo event in front of an historic church.

DeMarco’s account was released in written testimony (PDF) for his scheduled appearance Tuesday before the House Natural Resources Committee’s hearing on the Park Police’s punching, clubbing and use of chemical agents against what appeared to be largely peaceful protesters on June 1. The administration’s forceful clearing of the protest area in front of the White House came at the height of nationwide street demonstrations sparked by the killings of George Floyd and other Black people at the hands of police.

“From what I could observe, the demonstrators were behaving peacefully,” when Park Police, the Secret Service and other, unidentified forces turned on the crowd, DeMarco wrote. The rout started shortly after Barr and General Mark Milley, chairman of the Joint Chiefs of Staff, appeared in the square, where Barr appeared to confer with Park Police leaders, he said.

The legally required warnings to demonstrators before clearing the square shortly after were “barely audible” from 20 yards (18 metres) away and apparently not heard by protesters, he said.

Park Police and other officers began suddenly clearing the crowd without warning to National Guard forces present, DeMarco said. And a Park Police liaison officer told DeMarco that his forces were only using “stage smoke”, not tear gas, against the crowd. DeMarco said the stinging to his nose and eyes appeared to be tear gas, however, and said he found spent tear gas canisters in the street later that evening.

The National Park Service, which oversees the US Park Police, responded on Monday by repeating a statement from Park Police head Gregory T Monahan, who said last month that his forces acted to “curtail the violence that was under way”. The Park Police, a force of a few hundred officers nationwide, oversees a handful of the nation’s most iconic federal lands and monuments.

In the past, the Trump administration has also denied the Park Police acted to clear the square before Trump’s photo event.

DeMarco said he was the appointed liaison at the event for the Interior Department’s Park Police and the National Guard and was standing near a statue of Andrew Jackson, as Barr and other senior officials involved congregated. 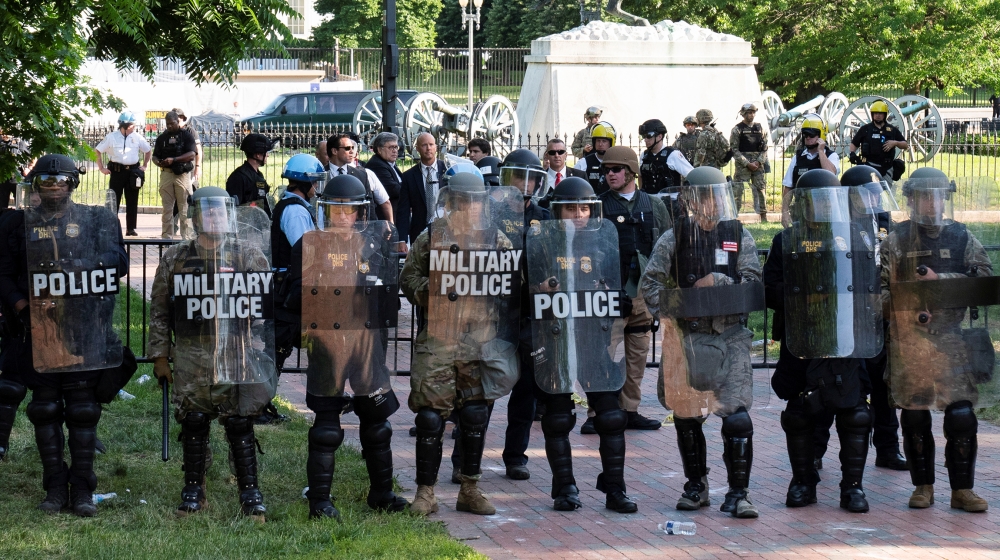 A National Guardsman on the scene will testify that the federal use of force against protesters in Lafayette Square on June 1 began immediately after US Attorney General Bill Barr conferred with US Secret Service and other officials in the park [File: Ken Cedeno/Reuters]

DeMarco described a quick conversation with Milley, the Pentagon’s top general, at the time in the square that DeMarco indicates gave no warning of the imminent push by the Park Police, the Secret Service and others against demonstrators.

“As the senior National Guard officer on the scene at the time, I gave General Milley a quick briefing on our mission and the current situation,” DeMarco wrote. “General Milley told me to ensure that National Guard personnel remained calm, adding that we were there to respect the demonstrators’ First Amendment rights.”

Shortly after Park Police and others forced out fleeing protesters, Milley walked in military fatigues alongside Trump as the Republican president strolled to nearby St John’s Church, where demonstrators had been blamed for starting a fire in a building basement on a previous night. Trump thrust a Bible in the air briefly for news cameras.

Milley subsequently apologised for taking part, after heavy public criticism. Milley said he “should not have been there” and his involvement “created the perception of the military involved in domestic politics”.

In his statement to the committee, DeMarco is expected to say he was “deeply disturbed” by the events his witnesses in Lafayette Square that evening.

“Having served in a combat zone, and understanding how to assess threat environments, at no time did I feel threatened by the protestors or assess them to be violent,” his written testimony read. “It was my observation that the use of force against demonstrators in the clearing operation was an unnecessary escalation of the use of force.

“From my observation, those demonstrators – our fellow American citizens — were engaged in the peaceful expression of their First Amendment rights. Yet they were subjected to an unprovoked escalation and excessive use of force,” he added.

Now starting at QB for the Cowboys … Ben DiNucci?

India surpasses Brazil to take second spot in total virus cases, behind only the U.S.

Ross Wilson must swoop for “phenomenal” £4m sensation who’d be…

What does the US election mean for Europe?

Levy can strike gold for Spurs with “very talented” starlet with…

These 10 Amazing Physics Stories Were Massive News in 2020