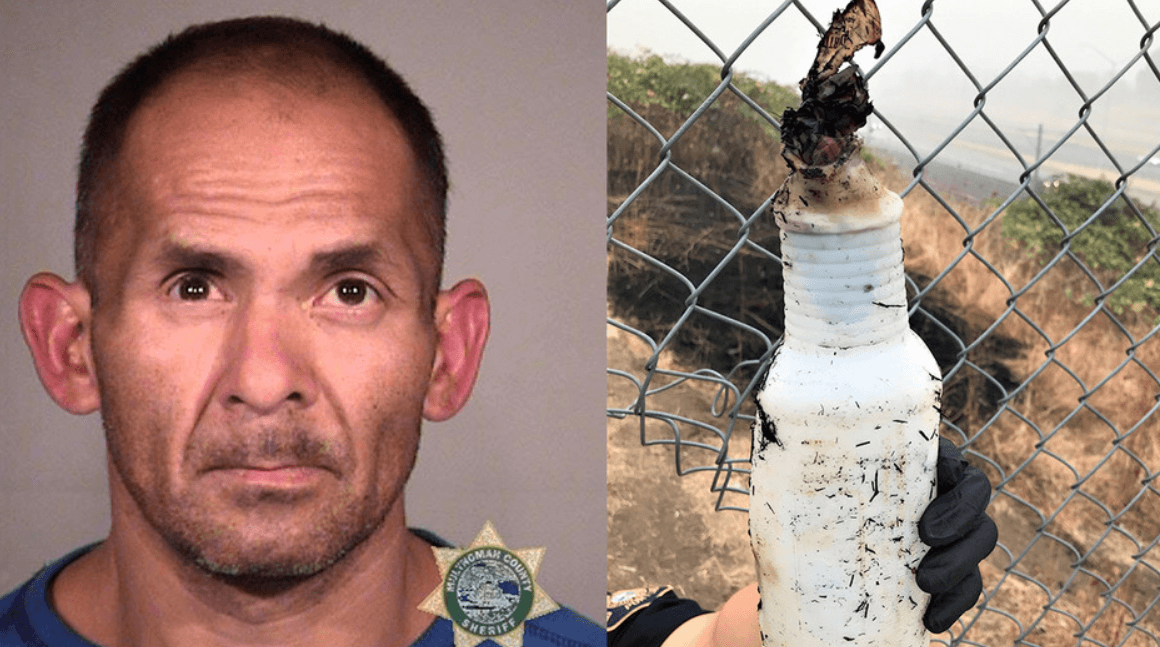 An Oregon man arrested for reportedly using a Molotov cocktail to start a wildfire was released and promptly taken back into custody after he started six smaller fires.

A statement issued by Portland police identifies the suspect as Domingo Lopez Jr., and alleges he is responsible for “multiple fires burning along the west side of the I-205 freeway.”

Lopez Jr. was arrested on Sunday after using the Molotov cocktail, then apprehended yet again less than 12 hours later with a lighter on his person.

Portland firefighters were able to extinguish three of the fires along the freeway while community members put out the other half. There were no reports of property damage or injuries.

RELATED: Biden: If ‘Climate Arsonist’ Trump Wins, The Suburbs Will Burn Down

Earlier this week, Democrat presidential nominee Joe Biden accused Donald Trump of being a “climate arsonist” and suggested if he were to win re-election the suburbs would be burned down.

“If he gets a second term these hellish events will become more common, more devastating and more deadly,” Biden claimed.

In reality, a lack of law and order and Democrat-supported catch and release policies for criminals are what is going to cause the suburbs to burn down.

Meanwhile, Democrats use things we can’t control (the weather) to try to scare us into enacting their left-wing agenda

They’ve enacted it in CA. They have the Green New Deal

And millions lose power, while they can’t even clean up their forests

Along with the super-hyperbolic speech regarding climate change, Biden tweeted a message trying to drive home his point that the wildfires you see this year are caused by global warming.

Added the proponent of the Green New Deal, “We need to act on climate. Now.”

Four people have been arrested thus far – two men in Washington state, one man in Oregon and one woman in California – on suspicion of arson in these West Coast areas.

We need to act on climate. Now.

Steve Milloy, the founder of JunkScience.com lambasted Biden for delivering “one falsehood after another” during his climate speech.

What’s unnatural is ignoring the need forest [email protected] would burn California to a crisp. https://t.co/qLERHWSau5

He listed the falsehoods off in a statement which included:

Milloy adds that Biden seemingly offers no real solutions to the wildfire problem either.

“[Biden] doesn’t mention or even refer to forest management for wildfires,” he tweeted. “California will burn to a crisp under Democrat rule.”

After an asteroid wiped out the dinosaurs, ocean microbes helped life rebound

Delingpole: The Great Reset Is Trending. Here’s Why…

No End in Sight as U.S. Cases Pass 5 Million

Long Covid symptoms in children and teens typically last between four and 12 weeks,…

4 games, 6 goals: Leeds may already have their next Beckford and Becchio strike duo –…

Has the Ravens’ offense already reached its peak?

NUFC missed out on Almiron upgrade in £25.2m-rated speedster compared to Luis Suarez…

Hawks’ free agent swoop of Bogdan Bogdanovic is a big deal, but team still has…