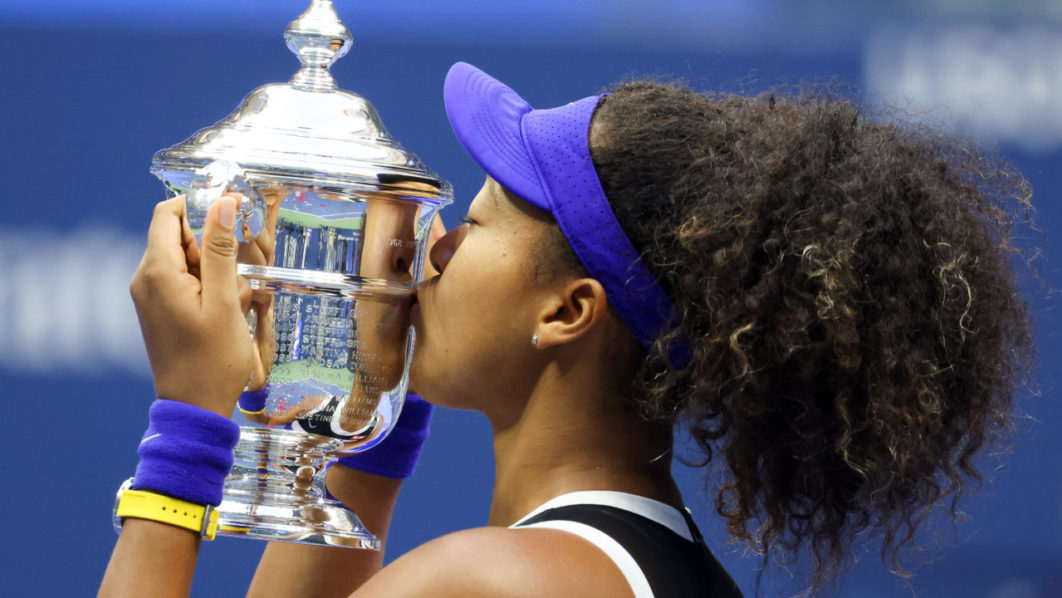 Naomi Osaka of Japan kisses the trophy in celebration after winning her Women’s Singles final match against Victoria Azarenka of Belarus on Day Thirteen of the 2020 US Open at the USTA Billie Jean King National Tennis Center on September 12, 2020 in the Queens borough of New York City. Al Bello/Getty Images/AFP

Japan’s Naomi Osaka came from a set down to beat Victoria Azarenka of Belarus to win the US Open on Saturday and clinch her third Grand Slam title.

Osaka, the fourth seed, overcame her unseeded opponent 1-6, 6-3, 6-3 in 1hr 53min inside a near-empty Arthur Ashe Stadium at Flushing Meadows.

It brought 22-year-old Osaka’s haul of tennis major trophies to three after her victories at the 2018 US Open and 2019 Australian Open.

Azarenka, 31, sprinted to the first set in just 26 minutes, dominating Osaka with an 88 percent success rate on her first serve.

The Japanese was uncharacteristically sloppy, hitting a whopping 13 unforced errors.

Azarenka then went 2-0 ahead in the second set before Osaka fought back to break her opponent’s serve twice and take a 4-3 lead.

The momentum had quickly swung in Osaka’s favor and she broke a third time to take the match to a deciding set.

Osaka enjoyed the first breakthrough of set three in game four when she broke Azarenka’s serve to take a 3-1 lead.

Azarenka then blew a golden opportunity to get back into the match, wasting three break points as Osaka recovered from 0-40 to hold for a 4-1 lead.

Azarenka then saved four break points to make it 4-2 as she battled to keep the contest alive.

When she broke Osaka in game seven, the set was back on serve.

But Osaka immediately broke back after Azarenka pushed a forehand wide to leave herself the opportunity of serving for the match.

After touching racquets with her opponent, Osaka lay down in the middle of the court and looked up at the sky in celebration.

Osaka had walked onto the court wearing a mask bearing the name of Tamir Rice, a 12-year-old African-American boy who was shot dead by a white police officer in Cleveland, Ohio in 2014.

Osaka, of Japanese and Haitian heritage, wore different masks honoring victims of racial injustice and police brutality in each round of the tournament.

Trump Onslaught Against Biden Falls Short of a Breakthrough

A tribute to Harold Evans, the founder of Condé Nast Traveller

Fauci: Worst Yet to Come as COVID-19 Surges

A Teenagers Hannibal Fan Art Will Hang in the U.S. Capitol

Hercules, the mighty strongman of the summer sky