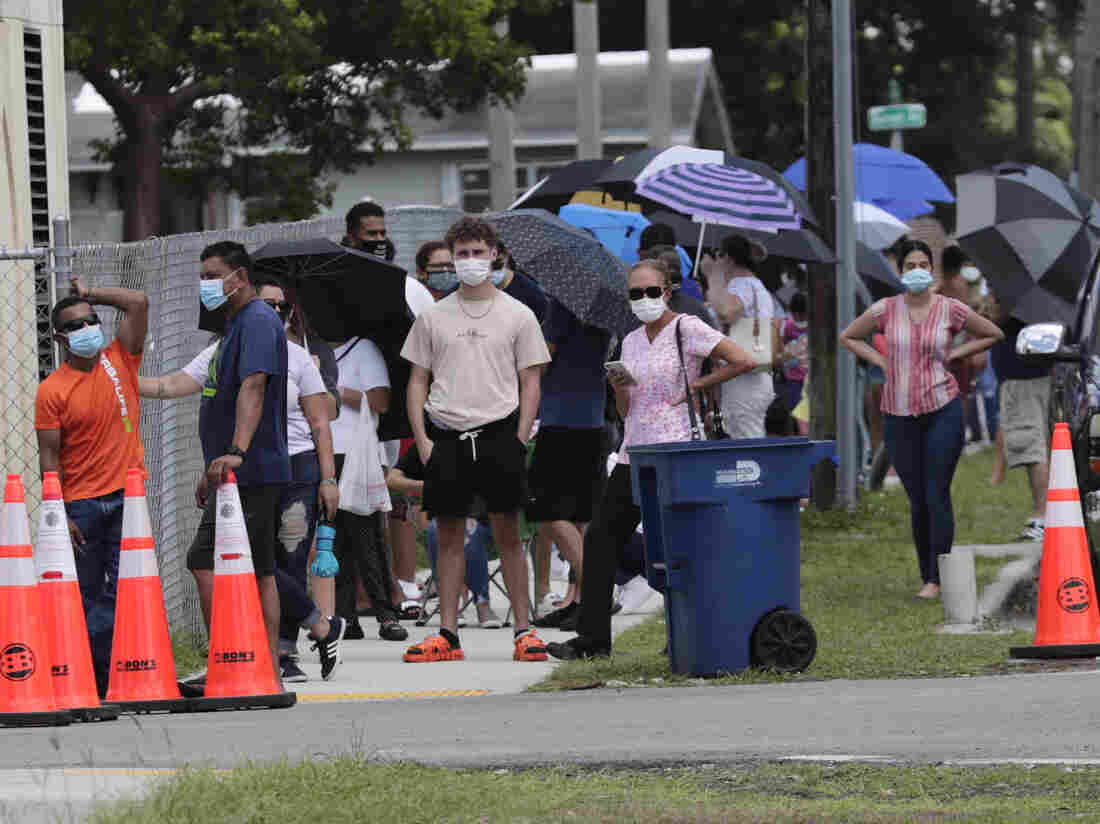 People wait in line outside of a COVID-19 testing site in Florida. The state has seen unprecedented surges in coronavirus cases in recent weeks. Lynne Sladky/AP hide caption

When the coronavirus pandemic began, public health experts had high hopes for the United States. After all, the U.S. literally invented the tactics that have been used for decades to quash outbreaks around the world: Quickly identify everyone who gets infected. Track down everyone exposed to the virus. Test everyone. Isolate the sick and quarantine the exposed to stop the virus from spreading.

The hope was a wealthy country like the United States would deploy those tried-and-true measures to rapidly contain the virus — like quickly dousing every ember from a campfire to keep it from erupting into a forest fire.

Today, it’s that hope that’s been extinguished — not the fire. A return to more restrictive shutdowns of businesses and public gatherings are likely necessary in many places, public health leaders say, to bring the number of cases low enough that “test, trace and isolate” can be used to douse epidemic embers.

“Right now we are experiencing a national forest fire of COVID that is readily consuming any human wood that’s available to burn,” says
Michael Osterholm, director of the Center for Infectious Disease Research and Policy at the University of Minnesota.

Testing, contact tracing and isolation are the tactics being used successfully to crush outbreaks in countries like South Korea and Germany. But those places never had the level of case surges many U.S. states are now experiencing.

“When you have something like this happening, there’s no way that traditional testing and tracing is going to have any meaningful impact,” Osterholm says. “I liken it to trying to plant your petunias in the middle of a category five hurricane.”

Others agree. At this point, there are just too many new infections occurring too quickly for underfunded, understaffed public health departments to effectively use testing and contract tracing, according to Dr. Jeffrey Engel, the senior adviser for the COVID-19 response for the Council of State and Territorial Epidemiologists.

That’s become especially true because of the long delays in getting the results of coronavirus tests, which can now take days or even weeks because of the surge in demand for testing. By that time, anyone who’s infected could have already spread the virus to other people.

“I think it’s the right response when you have a nearly controlled epidemic and you’re trying to mop up the spills. But but we’re not there in most places,” says Marc Lipsitch, a professor of epidemiology at the Harvard School of Public Health. “In many places, I think, we’re engaging in collective wishful thinking.”

Another problem is that test results in the U.S. often don’t include basic information needed to find people who test positive, such as phone numbers and addresses. And even if public health workers can find infected people in time, it’s often difficult to convince their contacts to quarantine, Engel says.

“It’s voluntary. And they have other things to do,” Engel says. “They may be essential workers. They may need to get to work. Life takes over.”

So if testing, contact tracing, isolation and quarantine won’t work , what will?

“Given our basic failure to fix the gaps in testing and the bottlenecks, that really puts us on a path where there no viable alternative beyond shutdowns,” says Jennifer Nuzzo, a senior scholar at the Johns Hopkins Center for Health Security.

Now, Nuzzo doesn’t think all hope is lost. If enough people finally start wearing masks, and get vigilant about staying at least 6 feet away from other people, especially indoors, there may still hope in at least some places of avoiding new shutdowns, she says.

“I do really worry about forcing an entire state or country to retreat to our homes for extended periods. These are harmful measures in themselves,” Nuzzo says.

And there may still be some places where the virus may not have yet spread widely, or has been suppressed low enough, for testing and contact tracing to be effective, some say.

“Hawaii!” wrote Caitlin Rivers of the Johns Hopkins Bloomberg School of Public Health, in an email to NPR. “They have the advantage of being an island, though.”

And in places that can’t avoid new shutdowns, some hope they won’t have to be as draconian as the first time. Outdoor spaces — such as parks, playgrounds and beaches — could remain open, for example, as long as people wear masks and maintain 6 feet of physical distance from anyone who is from outside their household.

“We know more about the virus and how it spreads now then we did in the spring,” says Rivers. “So, I think, for jurisdictions that take steps backward toward closing — I don’t think it will have to look like it did in the spring.”

Other scientists have proposed that lockdowns could be avoided if 95% of the U.S. population would start to wear masks consistently in public. But currently mask usage is much lower than that. And some public health experts doubt masks alone could be enough.

“The degree to which masking will drop transmission has been unfortunately overstated substantially by a number of people,” Osterholm argues. He points to Hong Kong, which has a big surge despite widespread masking.

“Use masks. They’re a complementary part of our response. But they’re not going to get us to the level where we can control this virus,” Osterholm says.

Now, none of this means testing and contact tracing is useless, experts say. Far from it. Indeed, experts say they want to see it continued and expanded. It can be used strategically to determine how to target shutdowns more selectively in situations and locations where the virus is spreading the most. For example, specific bars where people frequently infect each other can be identified and closed.

Osterholm hopes more measured lockdowns may work in some places too. But he’s skeptical, especially about the hottest of the hot spots.

“If we want to be like other countries in the world that have successfully contained the virus, then we have got to take the medicine now,” Osterholm says.

“We will not get there unless we bring this virus level down again. And there’s just no other way to do it literally but a kind of second lock down,” he says. “And this time let’s get it right.”

That could knock the virus back enough to let schools safely reopen, get some people back to work, and give the nation time to hopefully finally get enough tests, and hire enough contact tracers. It could help the U.S. get off the current roller-coaster of case surges, and regain as least some version of normalcy.

“Those countries that were on fire last spring and then did a lockdown are now the ones that have been successfully reopening,” Osterholm says. “Their economies are back, they’re enjoying life — and they’re still maintaining control over the virus.”

Brady’s Bucs just warming up, and he wants more

Vaccines Are for Sheep? | Armstrong Economics

10 Cars You Are Most Likely to Keep for 15 Years

Download the new CarPlay wallpapers for your devices right here

This is why millennials are going crazy for RVs, and these students thought they were…

Early signs of autism can be reversed if babies are offered…

More than HALF of companies are planning to impose COVID-19…