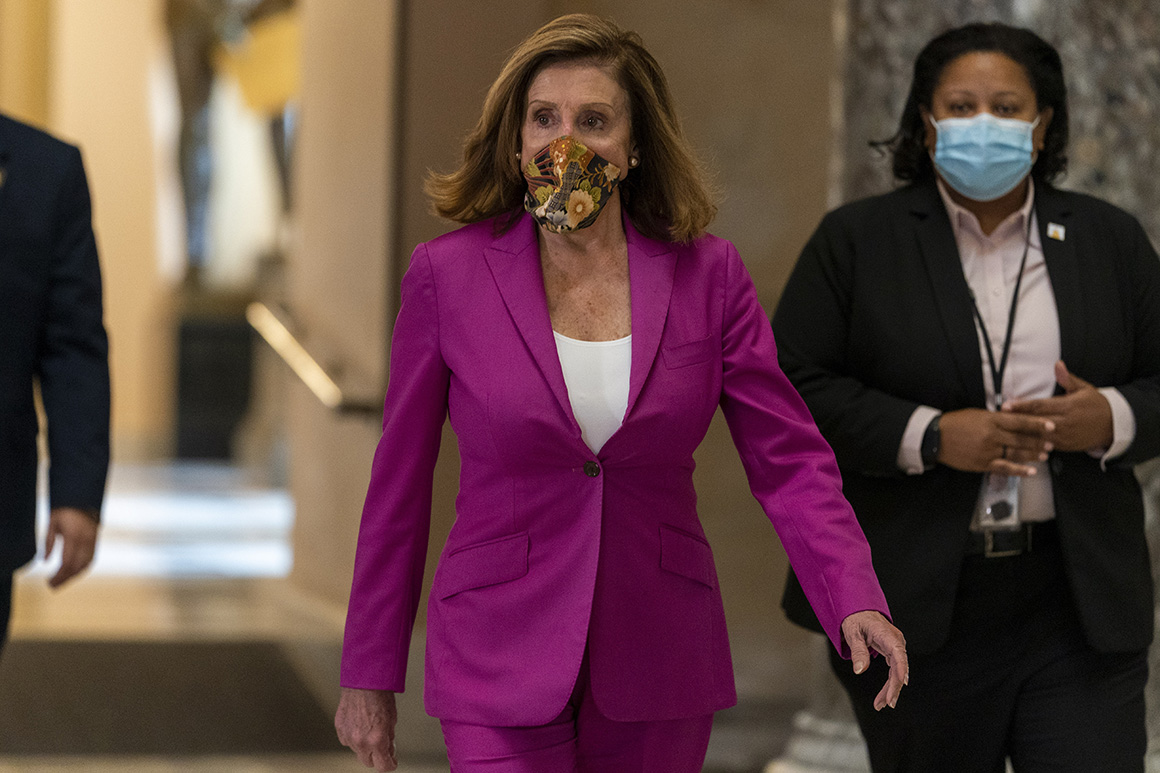 Speaker Nancy Pelosi faces growing calls from within her own ranks — including from some of her most vulnerable members — to take quick action on a coronavirus relief bill even if there’s no agreement with Republicans or the White House over the issue.

But Pelosi, supported by her leadership team and most committee chairs, is refusing to back down from her demands for a bipartisan $ 2.2 trillion-plus stimulus package to boost the U.S. economy, which Republicans have repeatedly dismissed.

Pelosi’s stance is increasingly putting her at odds with moderate members in her caucus, some of whom are growing more vocal in their anger by the day and with less than two months before the election.

A call between the centrist New Democrat Coalition and leadership grew heated Tuesday as Pelosi and House Majority Leader Steny Hoyer (D-Md.) defended their posture, even as several lawmakers pleaded for them to change tacks in the coming weeks.

Rep. Kathleen Rice (D-N.Y.) pressed Pelosi on why members wouldn’t stay in town waiting for a deal, to which the speaker told her to “take a poll of your colleagues,” according to Democrats on the call. “I’m always here,” Pelosi added. And the exchanges only grew stormier after Pelosi dropped off and Hoyer took over.

“My conviction is to actually do my goddamn job and come up with a solution for the American people,” Rep. Abigail Spanberger (D-Va.), who sits in a GOP-leaning seat, said, according to two sources on the call. “We have to bring something to the floor.”

Hoyer, who has privately pushed the speaker to reconsider her strategy, was sympathetic to the moderates’ concerns but wouldn’t break with Pelosi on the call.

“I don’t want to undermine Nancy in any way,” Hoyer said multiple times on the call.

The mixed messaging from the leadership wasn’t cutting it with frontliners, who have spent the last few months facing urgent demands from their constituents for some kind of congressional action to address the twin health and economic crises.

Pelosi and senior Democrats argue their strategy is the only way to ensure that Democrats don’t simply cave to a GOP proposal that would fail to address major sectors of the economy, most especially aid to state and local governments who are facing a potentially catastrophic loss of revenue.

“A skinny deal is not a deal,” Pelosi said on a call with Democratic members Tuesday. “It is a Republican bill.”

And Pelosi has strong backing from progressive groups and labor unions, who are demanding that Congress pass a robust stimulus package in order to help the battered economy. While millions of jobs have returned, payrolls are down more than 11 million jobs from pre-pandemic employment levels. Poverty and food insecurity have gotten worse, and many economists fear the United States is on the verge of a long-term downturn unless more dramatic steps are taken by the federal government.

Pelosi made a similar argument to her leadership team in a private meeting on Monday night, where she again reiterated that Democrats should stand firm in their funding demands for the next package, according to people in the room. The California Democrat told members that she is still working to negotiate with the White House, but didn’t offer details on the status of those talks.

Pelosi tried to appease her caucus Tuesday, telling them in the morning call that the House wouldn’t depart Washington until there is a coronavirus funding compromise.

“We have to stay here until we have a bill,” Pelosi said, according to multiple Democrats on the call.

But that move only seemed to lead to more consternation after she and Hoyer later clarified that lawmakers would, in fact, be able to leave town as long as they could return within a day’s notice to vote on a bill — the same arrangement the House had during the August recess.

Many Democrats said they felt torn, anxious to get at least some money out the door — without caving to a GOP bill that shortchanges the most desperate Americans.

“We can‘t wait around forever for the proposal we think is the perfect proposal and that obviously won’t be helpful to anybody. Time is of the essence here,” said Rep. Jason Crow (D-Colo.), who flipped a GOP seat in 2018.

But he added that Democrats can’t accept a number too low, either: “If you’re looking at something that is wholly insufficient and does not address the complexity of the money, then you’re actually just wasting that money.”

Rep. Alexandria Ocasio-Cortez (D-N.Y.), the highly influential freshman lawmaker, also said she has wrestled with the issue even as she has seen the pandemic’s devastating influence back home.

“This administration, it seems what they want to do is cut another $ 1,200 check, but they don’t want to actually provide state and local [aid],” Ocasio-Cortez said. “That $ 1,200 is a nice little sugar high, and I support giving another stimulus check, but a second check in and of itself alone — if we’re not going to support state and local funding, if it’s not going to include significant investments in testing, tracing capacity and infrastructure — all it is is a little sugar high. It’s not going to solve the critical issues of the pandemic.”

The sentiment from Ocasio-Cortez and others reflects the mounting angst within the Democratic Caucus over the party’s handling of the coronavirus response and whether they need to do more to counteract the GOP’s messaging. The House passed a $ 3.4 trillion relief package in May but the Senate didn’t act on it.

Some Democrats worry that voters have already long forgotten about the House’s massive relief package from May and will take their anger out on both parties in November. They say that voting on additional bills could help remind people back home that Democrats have been pushing to deliver more aid all along.

“Let’s make sure the American people know what we stand for and where we are,” Rep. Greg Meeks (D-N.Y.) said.

One idea, Meeks said, is to build out a new proposal to reflect the roughly $ 2 trillion price tag that Pelosi has described as the lowest figure Democrats would be willing to accept.

“I think we can reemphasize what we’re doing and how we’re intent on spending the money, and even where we made some reductions,” Meeks said.

But Pelosi has roundly resisted calls from some Democrats to negotiate a smaller coronavirus deal or put targeted bills on the floor addressing specific aspects of the pandemic including testing, unemployment aid and small business loans.

Talks between Pelosi and the White House, led by Treasury Secretary Steven Mnuchin, have been stalled for weeks, even as the coronavirus continues to devastate the U.S. economy, leaving millions without jobs and at risk of losing their homes. More than 6.5 million Americans have been infected with the virus and more than 194,000 have died.

Senate Democrats blocked the GOP’s attempt to advance a “skinny” $ 500 billion coronavirus relief bill last week, leaving senators in both parties — including Senate Majority Leader Mitch McConnell himself — to speculate that congressional leaders wouldn’t get another coronavirus deal until after the election.

That prospect, however, has alarmed many House moderates, particularly those facing tough races in November. Some, led by the bipartisan House Problem Solvers Caucus, have drafted their own long-shot compromise in an attempt to pry loose some kind of deal before November.

That group released a roughly $ 2 trillion plan on Tuesday that would renew now-expired programs like unemployment aid and small business loans, though it also includes billions in spending that Senate Republicans have already rejected, like cash for state and local governments or the U.S. Postal Service. Pelosi has indicated she would negotiate a $ 2.2 trillion package with Republicans but hasn’t been open to going below that number.

Pelosi didn’t address the Problem Solvers plan during Tuesday’s caucus call, but her position was made clear later in the day when several of her committee chairmen put out a joint statement dismissing the plan as falling “short of what is needed.”

Some of those same allies, including House Ways and Means Chairman Richard Neal (D-Mass.), also defended Pelosi’s strategy on the caucus call Tuesday.

“For us, not to cave in is really important,” Neal said on the call, according to Democrats who dialed in.

But not everyone was in agreement.

House Transportation Committee Chairman Peter DeFazio (D-Ore.) did not sign onto the joint statement. And he said on the caucus call it was clear Democrats would have to address the coronavirus again before going home for the election, noting it’s been four months since the House passed its $ 3.4 trillion relief bill.

“We can’t leave town without a package,” DeFazio said, stressing Democrats pass a bill that will provide coronavirus aid at least until early next year, when there might be a Democratic president in the White House. “We need to talk about all of our principles in a five month bill.”

Spelunky 2 is out today on PS4

Nicki Minaj, Kehlani And Summer Walker May Collaborate On A Project

Tesla Sues Rivian And The Allegations Are Serious

Cuomo Wonders If Capitol Attack Is ‘End for This Country,’ Walks It Back

Ten Defining Moments for Women in 2020

Ammika Harris Shows Off A Lot Of Skin In These Photos