People Rally in Support of Trump at Oklahoma State Capitol 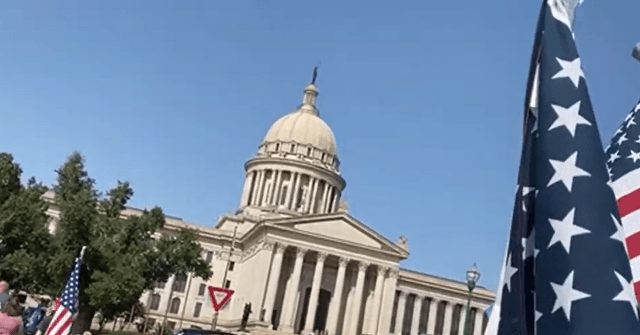 Oklahoma residents rallied in support of President Donald Trump on Saturday in their “Drive for 45” rally outside the Oklahoma State Capitol.

The Drive for 45 is part of a nationwide effort to rally and drive in support of Trump, the 45th president of the United States, KFOR reported.

The Drive for 45 in Oklahoma had flags, signs, and bumper stickers all in support of the president.

“It’s just great seeing the support we are getting out here, it’s amazing.” said Jerry Adams.

Pro Trump Parade dubbed “Drive for 45” kicking off at State Capitol. Will travel 40+ miles around the metro. @kfor pic.twitter.com/54074vCxk0

“People are scared to death to voice their approval for Donald Trump. They are afraid of the repercussion. We’re not.” said Adams.

Oklahoma Drive for 45 leaders say the rally is an on-land version of the popular boat parades. Organizers say they have signed up 10,000 members in five weeks.

“We are out here to wake the silent majority and let them know that they have a voice.” said Stormi Sanchez.

Organizers say they plan to do another drive-in rally in the state in late October and assemble at the capitol once again on November 1 for another rally.

People have held similar rallies in places across the country, including Staten Island, New York, and Washington, DC, to wish the president well as he battles the coronavirus at Walter Reed National Military Medical Center.

Ugandan opposition reels from widespread repression ahead of Thursday’s election

They’re Against Trump, But What Are Dems For?

Trial of a Nazi Monster: Hermann Göring at Nuremberg

Could Aaron Rodgers have run in for game-changing TD? Viewers debate Packer…

Ivanisevic: Djokovic should not have been disqualified

For Apple, $2 trillion might be just the start [Cult of Mac Magazine 363]

The Best Laptop Stands for Your Work Setup