While July 4 weekend for many Americans means parties, barbecues, fancy fireworks shows with family and an all-around great time in the summer, it is the least favorite time of the year for some doctors.

Not because of a lack of patriotism, however, but rather becauseof the level of injuries suffered every year from mishaps.

From holes in chests to blown-out eyes, physicians have seen it all.

‘I don’t want you to come out and figure that we’re not patriotic. We’re exceptionally patriotic people,’Dr Shachar Tauber, an ophthalmologist at Mercy Hospital in St Louis, Missouri, told DailyMail.com.

‘We just, unfortunately, see the result of what is innocent, celebration of our independence turn tragic.’

There are many ways Americans manage to hurt themselves over the holiday – and those around them as well – and three physicians shared with DailyMail.com the worst injuries they’ve seen on Independence Day. 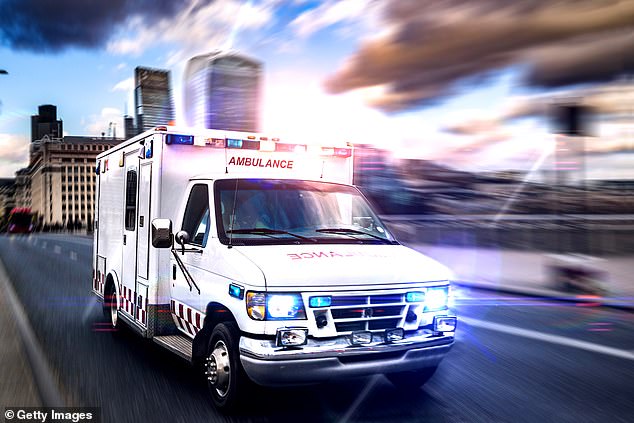 Eye injuries are the most common that occur on Fourth of July with around10,000firework-related eye injuries around the holiday annually.

The injuries can often lead to permanent eye damage, and sometimes even going blind in one eye.

Handing a sparkler to a young child who puts it too close to their face, teens shooting Roman candles at each other or people standing over mortars as they launch are all among the most common ways people damage their vision over the holiday.

There is an uptick in eye injuries almost every July 4, according to Tauber.

As a regional hospital, Mercy often deals with a much higher case load than many others around the country.

In a particularly brutal year, Tauber said his unit ran out of resources to treat some of these injuries.

‘To think that a hospital like ours…[could] run out of antibiotics,’ he said.

‘It was very difficult [to treat patients that year]. That same year we ran out of protective eye-patches because we were overwhelmed.’

There are also a few particular cases that have stuck with Tauber over the years.

In one case, a recently graduated high school senior – only months away from his first semester of college – injured his eye shooting Roman candle fireworks back and forth with his friend.

The fireworks can burn at temperatures exceeding 4500F.

‘He was shot in the eye with a Roman candle, the damage was severe enough that he had to surgery before he got to me,’ Tauber said.

‘And he can’t see shadows of of that eye eight years later.’

Tauber says he has kept in touch with the man, who has since graduated college and now has a child, and will usually reconnect with him around the holiday.

Most importantly, the man now ‘has a healthy respect for fireworks,’ Tauber said. 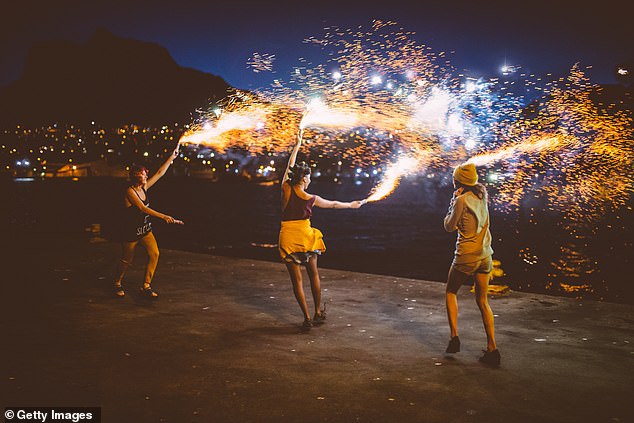 People standing to close to or playing with fireworks often results in injuries, doctors say. One man who launched a firework to close to himself ended up dying after the explosion ripped open his chest (file image)

While eye injuries are the most common, there are many other severe injuries people suffer over July 4, usually also due to fireworks.

Dr Zach Bauman, a trauma specialist at Nebraska Medicine in Omaha, told DailyMail.com that there is a surge in patients around the holiday every year, and hand injuries are among the most common his unit sees.

‘We probably have our highest percentage of hand injuries, right around the Fourth of July,’ he said.

‘Obviously because of fireworks going off in people’s hand.’

Bauman says the injuries he’s seen have ranged from small lacerations to minor burns to broken bones – and even more severe cases.

‘Some explosion injuries of the hands can actually cause…what we call a “mangled extremity” meaning that the hand can be blown apart and be non-functional at that point,’ he said.

‘There’s definitely one thing that I always caution people about going into the Fourth of July timeframe, to be cognizant of those fireworks because I think a lot of people take their hands for granted.’

He said that one of his colleagues once treated 26 patients for hand injuries in 16 hours over a Fourth of July holiday. 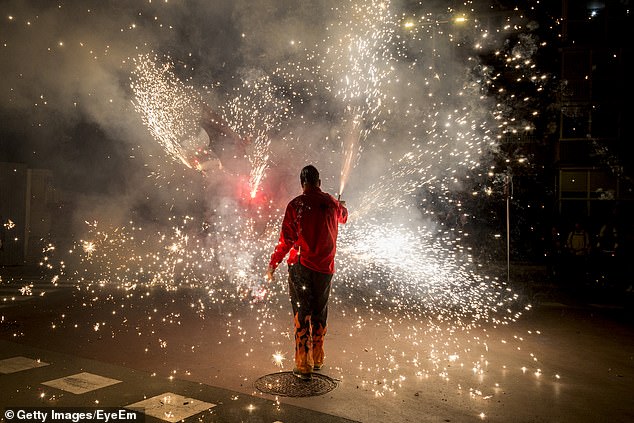 Fireworks are the main culprit of many July 4 injuries, but drownings and traffic incidents also become more common this time of year. One teen had his eye sight permanently damaged while playing with Roman candles with his friends (file image)

Bauman has also seen a few abdomen injuries that have stuck with him, including a man that blew a hole through his chest with a large artillery firework.

‘I did see one of those large artillery shells go off in close range to somebody’s chest and basically put a huge hole right through,’ he said.

‘I mean you could actually see the patient’s heart.’

Unfortunately, the man died because of his injury withBauman calling it ‘one of the crazier firework injuries I’ve ever seen.’

Augmenting fireworks at home can often end in disaster as well, as one woman learned last year.

‘Last year I remember we had a lady come in that was using a piece of PVC pipe [to launch the fireworks],’ he recalled.

‘So she would put the fireworks in and then allow them to launch into the sky.

‘[She] had to go to the operating room for further operation.’

The mix of alcohol, along with dangerous items like fireworks, are often the perfect ingredients for these types of catastrophic injuries.

‘Unfortunately, a lot of the injuries around the Fourth of July stem from a mixture of alcohol intoxication or other substance abuse during that timeframe,’ Bauman said. 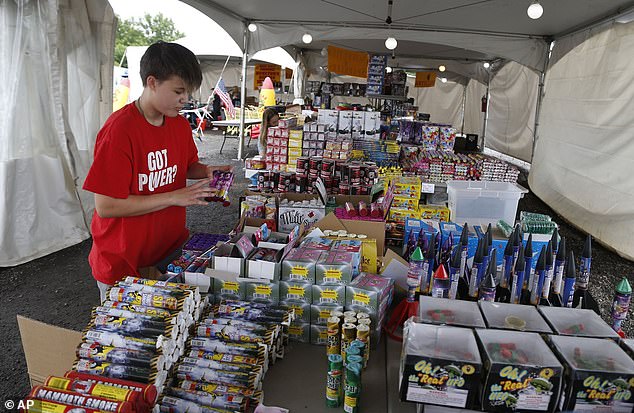 The mixture of alcohol along with water, as many cool off in a pool or at the beach around this time of the year, can be a recipe for disaster as well.

Dr Bobby Lewis, the co-medical director, University of Alabama-Birmingham Wound Care and Hyperbaric Medicine Clinic, has seen a variety of July 4 catastrophes during his twelve years at the clinic.

Unfortunately, a lot of the injuries around the Fourth of July stem from a mixture of alcohol intoxication or other substance abuse during that timeframe.

Lewis told DailyMail.com he has seen dozens of children permanently lose sight in one of their eyes due to fireworks, he has seen all kinds of hand injuries and he has even seen firework incidents cause fires to spark in dryer areas.

He also noted that drownings become common around this time of the year.

‘Everybody’s there [at July 4 celebrations], the families are here, the big crowds were around and parents are not always paying close attention to what the children are doing,’ he said.

‘[Suddenly] a two year old child is missing and they find them at the bottom of the swimming pool.’ 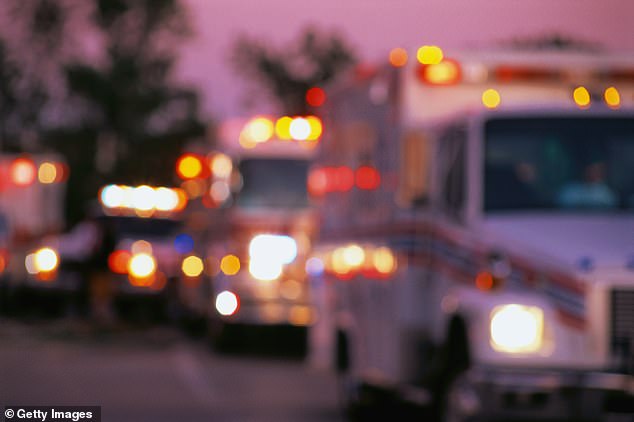 Bauman said that his unit also sees a lot of drownings around July 4, mainly due to people being out in rivers and lakes while intoxicated.

Lewis also notes that there is an uptick in traffic related injuries around this year due to the large amount of people on the roads.

All three physicians gave similar advice to avoiding these kinds of catastrophes over the holiday weekend.

Firstly, to take fireworks seriously, and not play with them like toys.

They recommend leaving the fireworks displays to professionals and, if someone is to use them at home, to use safety glasses to avoid eye injuries.

The physicians also recommend people to stay on the sidelines if they are drunk, because intoxicated people are more likely to hurt themselves and the people around them.

Finally, parents should keep an eye on their children and make sure to keep them far away from the action when fireworks are being lit up.

‘We don’t want people not to celebrate our independence and be amongst family and friends during the celebration, we just want them to be safe,’ Taubman said.

This Is Your Father’s Supreme Court

Covid US: Nearly 100,000 cases a day recorded for first time since February

The history and politics behind the Evergrande debt crisis, and new-home sales turn…

Ultracold atoms can work together to shape or steer light

Partial Lunar Eclipse To Be Longest Since 1440

The Venture Bros. Cancelled After Seven Seasons on Adult Swim

The best beach bars in the UK

Explore an Even Richer, Diverse Universe in No Man’s Sky’s New Origins Update