Note: Be careful with diffusion indexes. This shows a rebound off the bottom – some improvement from May to June to July – but doesn’t show the level of activity.

Manufacturing activity in the region continued to expand this month, according to firms responding to the July Manufacturing Business Outlook Survey. The survey’s current indicators for general activity, new orders, and shipments showed positive readings for the second consecutive month, coinciding with the phased reopening of the economy in our region. The employment index reached positive territory for the first time since March. Although future indicators for general activity, new orders, and shipments declined from last month’s readings, the indexes remained elevated, suggesting that the firms expect overall growth over the next six months.

The diffusion index for current activity edged down 3 points to 24.1 in July, its second consecutive positive reading after reaching long-term lows in the spring … The firms reported increases in manufacturing employment overall for the first time since March, as the current employment index rose 24 points to 20.1 this month, its highest reading since October.
emphasis added

This was above the consensus forecast. Here is a graph comparing the regional Fed surveys and the ISM manufacturing index: 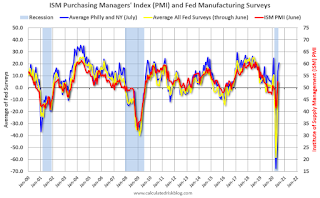 These early reports suggest the ISM manufacturing index will increase further in July.

Jackie Warner: 5 Things To Know About ‘Work Out’ Alum Who Says She Dated Jillian Michaels For 6 Years

Can the Wristcam actually make the Apple Watch a good camera?

Why Can’t Baby Boomers and Millennials Just Get Along? (NSQ…