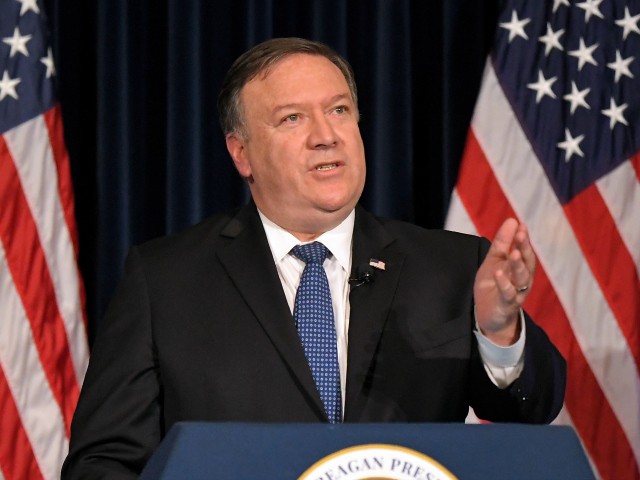 However, the report also serves as an examination and defense of America’s founding principles.

It is the result of more than a year’s work by the Unalienable Rights Commission, launched by Pompeo almost exactly one year ago, on July 9, 2019. The commission was comprised of some of the world’s top human rights scholars and activists.

Pompeo, in remarks at the National Constitution Center in Philadelphia, said he established the commission after seeing a “rapidly expanding catalog of rights” that only multiplied the “risks of collision” and “trivializing core American values.”

“America draws strength and goodness from her founding ideals and that our foreign policy must be grounded by those ideals as well. But we know this, we can’t do good at home or abroad if we don’t precisely know what we believe and why we believe it,” he said.

He said he did not ask the commission to discover new principles, but to furnish advice on human rights grounded in America’s founding principles and the 1948 Universal Declaration of Human Rights.

“Without this grounding, our efforts to protect and promote human rights is unmoored and therefore, destined to fail. And so, the Commission on Unalienable Rights was born,” he said.

Pompeo defended America’s founding principles, at a time when leftists have launched an assault on them.

“The Declaration of Independence itself is the most important statement of human rights ever written. It made human freedom and human equality our nation’s central ideas,” Pompeo said.

“These rights, these unalienable rights are essential. They are a foundation upon which this country was built. They are central to who we are and to what we care about as Americans,” he said.

He noted that the report’s timing was coincidental, though timely, given the civil unrest roiling the nation. He said:

But crucially, crucially the nation’s founding principles gave us the standard by which we could see the gravity of our failings and a political framework that gave us the tools to ultimately abolish slavery and enshrine into law equality without regard to race. You don’t always hear these ground truths today. Nor do you hear about the greatest strides our nation has made to realize the promise of our founding and a more perfect union.

He criticized those promulgating hatred of America’s founding principles, including the New York Times’s “1619 project,” which he said presents the view that the U.S. was founded for human bondage and the Marxist ideology that America is only the oppressors and the oppressed.

“The Chinese Communist Party must be gleeful when they see the New York Times spout this ideology. Some people have taken these false doctrines to heart. The rioters pulling down statues thus see nothing wrong with desecrating monuments to those who fought for our unalienable rights from our founding to the present day,” he said.

“This is a dark vision of America’s birth. I reject it. It’s a disturbed reading of our history. It is a slander on our great people. Nothing could be further from the truth of our founding and the rights about which this report speaks,” he added.

“The Commission reminds us … America is special. America is good. America does good all around the world.”

Pompeo said knowing what unalienable rights are core to the nation’s founding principles would also help the U.S. decide which to defend.

“This grounding in our founding principle also helps us to judge when other nations are violating the rights that we care most about,” he said.

He noted the report comes at a time when authoritarian regimes are committing human rights abuses every day and institutions meant to hold them accountable are failing.

“The United Nations Human Rights Council does the bidding of dictators and averts its gaze from the worst human rights offenses of our times. Indeed, international courts too have largely abandoned unalienable rights. The international criminal court is training its sights on Americans and Israelis, not the Ayatollahs of the world,” he said.

“And our incurious media rarely examines any of these failings,” he added.

He said unless the U.S. stands up for these unalienable rights at home and abroad, they could be lost forever.

“President Lincoln recognized the truth about securing American freedoms. He knew that the ultimate danger to America would be internal,” he said. “He understood that America would overcome all challenges from outside provided that the nation remain true to its founding principles.”

“President Reagan once said, if we lose freedom here, there is no place to escape. This is the last stand on earth. We see that in what’s going on around the world today as well,” he said.

“I am confident that the American star will shine across the heavens so long as we keep a proper understanding of unalienable rights at the center of our unending quest to secure freedom for our own people and all of mankind,” he said.