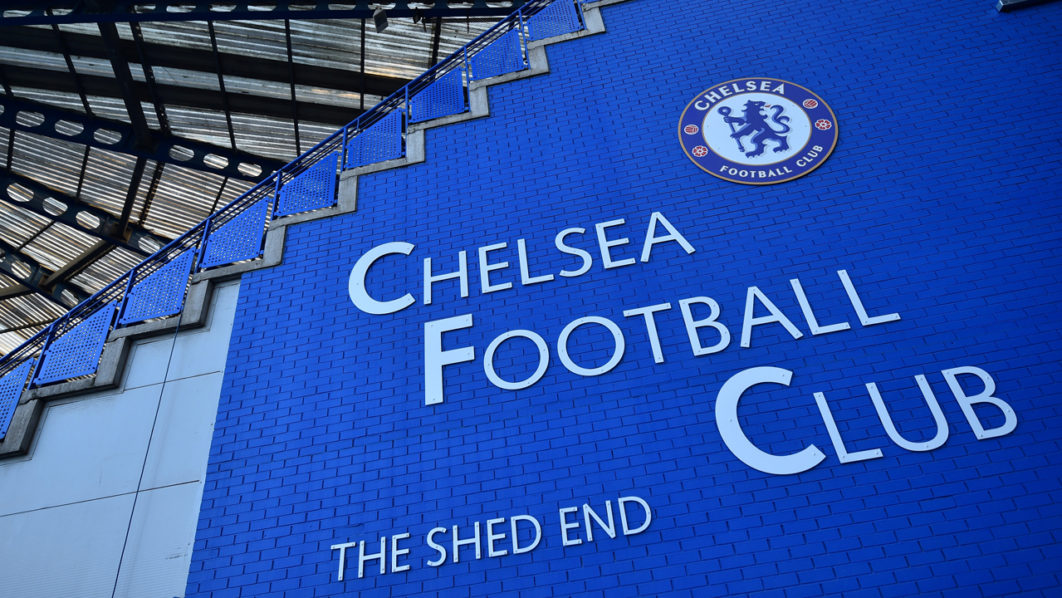 (FILES) This file photo taken on February 27, 2019 shows the Chelsea logo pictured on the wall of the club’s “Shed End” stand ahead of the English Premier League football match between Chelsea and Tottenham Hotspur at Stamford Bridge in London. (Photo by Glyn KIRK / AFP)

Premier League chief executive Richard Masters has warned it is “critical” to get fans back into stadiums soon, but a spike in coronavirus cases has forced the British government to review plans to reopen venues from October 1.

The Premier League was forced to finish last season with the final 92 matches played behind closed doors after the coronavirus lockdown.

When the 2020-21 campaign kicks off on Saturday, stadiums around England will remain empty in the stands due to the continued threat of the pandemic.

Brighton hosted 2,500 fans for their recent pre-season friendly against Chelsea, while Arsenal’s Premier League home match against Sheffield United on October 3 was earmarked for a potential reduced-capacity test event.

Fearing potential losses of £700 million ($ 910 million), Masters said it is essential for the financial health of English football that supporters are able to return soon.

“We have to get back to fans inside stadia as quickly as possible – that’s the big thing that’s missing, economic or otherwise – we need fans back inside stadiums for all sorts of reasons and it’s the number one priority,” Masters told the BBC.

“I think perhaps there is a perception the Premier League economy can withstand just about anything, but if you do lose £700m out of a planned budget it’s going to affect things and clubs have had to make some very difficult decisions.”

However, an increase in the number of virus cases has forced the government to ban gatherings of more than six people from Monday.

– ‘Bumps in the road’ –
“At the present time, we must also I am afraid revise plans to pilot larger audiences in venues later this month and review our intention to return audiences to stadiums and conference centres from October 1,” Prime Minister Boris Johnson told a press conference on Wednesday.

“But that doesn’t mean we are going to scrap the programme entirely, we are just going to have to review it and abridge it.”

It has been reported pilot events that have already been arranged to test the safe return of spectators will be limited to a maximum of 1,000 people with social distancing measures in place.

Oliver Dowden, the Secretary of State for Digital, Culture, Media, and Sport, said changes to the pilot plans would be announced shortly, with the long-term aim now to have larger crowds by Christmas.

“Further to the PM’s announcement we are reviewing the list of proposed sports pilots ahead of 1 Oct, in light of the increased number of cases. Details of changes will be announced shortly,” Dowden wrote on Twitter.

“We are keeping under review further easements proposed from 1 Oct but no changes have been announced today and we continue to plan for the best.

“As I said on Sunday and the PM confirmed today, work continues round the clock on the moonshot project with the ambition of having audiences back much closer to normal by Christmas.”

Masters admitted the Premier League never expected the path back to full stadiums to be a smooth ride.

“We wait to see what the government decides and we’ll remain in dialogue with them throughout,” he said.

“We always knew September was going to be a difficult month at the start of the return to normality the government was talking about, and so we should anticipate bumps in the road.”

Republicans start to relent: ‘It looks like it will be President Biden’

England: Gareth Southgate’s players to dye hair blond like Phil Foden if they…

Oil trades above $70 a barrel on reopening optimism

Democrats romped statewide in Georgia, but the GOP’s gerrymanders are brutal as…