President Biden traveled to the Capitol to pay respects to Brian Sicknick, the officer who died from injuries sustained at the Capitol riot. 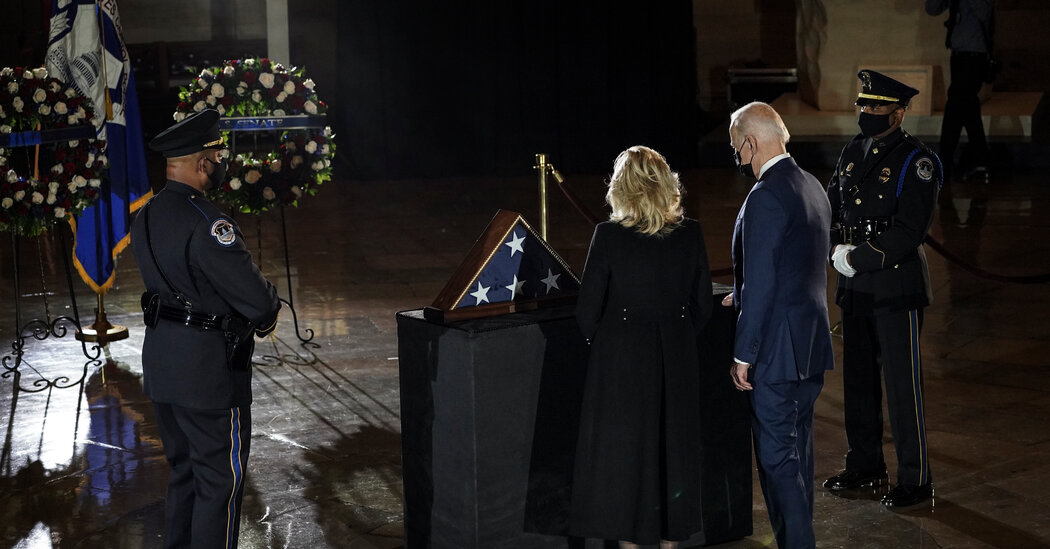 President Biden traveled to the Capitol on Tuesday evening to pay his respects to Brian D. Sicknick, the Capitol Police officer who died from injuries sustained during a Jan. 6 mob attack and whose remains were brought to lay in honor in the Capitol Rotunda.

Mr. Biden spoke with members of Mr. Sicknick’s family in the days after he was killed, according to White House officials, but his visit to the Capitol was not announced until the president’s motorcade departed the White House. Jill Biden, the first lady, joined him.

On Tuesday around 9:30 p.m., Mr. Sicknick’s remains were delivered to a silent Capitol on a cold and windy evening. Officers from Mr. Sicknick’s unit, some on mountain bikes, lined up near the steps outside. Senator Chuck Schumer of New York, the majority leader, and House Speaker Nancy Pelosi stood to the side during the arrival.

The memorial for Mr. Sicknick, who was 42, will not be open to the public, but police officers and lawmakers are scheduled to be given the opportunity to pay their respects before Mr. Sicknick is buried at Arlington National Cemetery.

It is rare for people to lie in honor in the Capitol, a distinction reserved for private citizens, while government officials, like former presidents, lie in state. Congress authorized the distinction in 1998, after two Capitol Police officers were killed by a gunman. Rosa Parks, the civil rights leader, and the evangelist Rev. Billy Graham are the only other two individuals who have received the honor.

“The family of U.S. Capitol Police Officer Brian D. Sicknick thanks the Congressional leadership for bestowing this historic honor on our fallen American hero,” his partner, Sandra Garza, and his family said in a statement. “Knowing our personal tragedy and loss is shared by our nation brings hope for healing.”

At least 14 other Capitol Police officers were injured in the attack, according to a memo issued by the F.B.I., which said in January that it would investigate Mr. Sicknick’s killing. Two officers who responded to the attack have since died by suicide.

F-22 and the F-35: What Makes These Stealth Fighters Special

An Antares rocket launch for NASA may be visible along the US East Coast tonight.…

Snapdragon 480 is the first 4-series 5G chipset from Qualcomm

How Trump Changed the World

A cheaper iPhone 12 will land in 2021, at the expense of features

NHL plays games amid sports boycotts, a move that misses the mark once again

The Most Competitive Races Aren’t In Michigan, Wisconsin or Pennsylvania

How to Hide App Pages on iPhone App Library

5 practical ways to cut back on doomscrolling