President Trump Makes His Pitch for a 2nd Term 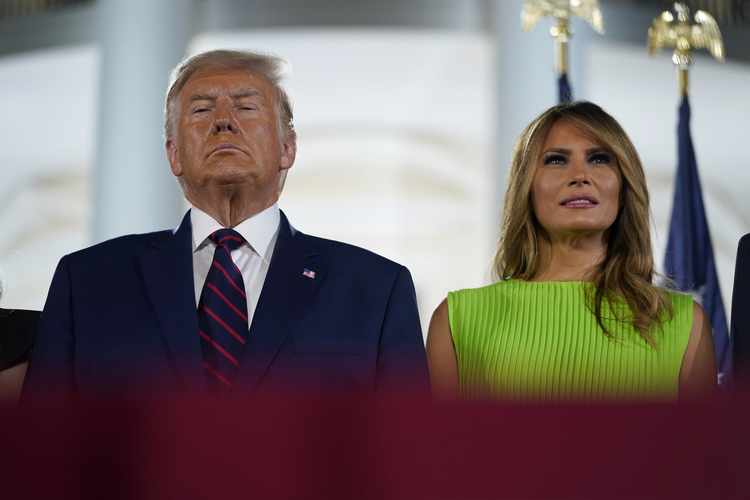 The speech was very long, and the protesters were very angry by the end. They had crowded into Lafayette Park, bringing with them signs and banners and a miniature guillotine complete with a life-like effigy of the president lying beneath its blade. Across the street at the White House, the incumbent seeking another term was officially accepting the Republican nomination.

He spoke for more than an hour.

A passing news helicopter captured the scene: The South Lawn was flooded with light and packed with the party faithful while demonstrators occupied the park and all of Black Lives Matter plaza.

It was an unplanned contrast but one that Republicans felt confident underscored the contrast President Trump was making behind the gates. He is — and will be during a second term — the leader who “will defend the American way of life” and who will “never allow mob rule.” His opponent, Trump argued, would do the opposite:

The warning was ominous and dark on a hot and humid Thursday when more than 1,000 Republicans, most of them without masks, gathered at the White House for the final day of what had been a largely virtual Republican National Convention. Biden had argued at the end of his party’s “gathering” the previous week that Trump is a menace who must be defeated, and that his own candidacy represents “love and hope and light joined in the battle for the soul of the nation.”

Trump did his best to turn that on its head.

“Joe Biden may claim he is an ‘ally of the light,’ but when it comes to his agenda, Biden wants to keep you completely in the dark,” the president said before launching into a familiar refrain. Sure, Biden won the nomination running as a moderate in comparison to the rest of the field. But his challenger, he said, was “a Trojan horse for socialism.”

Contrary to what the Democrat has said, Trump insisted that Biden would “defund the police,” and as a result “no one will be safe in Biden’s America.”

He told the crowd that his opponent would shut down the economy in the face of the coronavirus, “a plan that is not a solution to the virus, but rather it’s a surrender to the virus.”

The president mentioned Biden 42 times by name, according to the official transcript released by his campaign. And this was another contrast: Biden never said Trump’s name once throughout his many appearances at the Democratic convention.

It was a small but significant preview of the aggressive arguments the president will continue to make as the country barrels toward November. He has to make up significant ground. According to the RealClearPolitics polling average, he trails Biden by 7.1 percentage points.

Trump presented the last four years through the prism of “promises made, promises kept.” But his term has also been one of bitter national division, petty partisanship on both sides of the aisle, and now a pandemic, economic strife and racial calamity. Prior to the most recent turmoil, he was the third president to be impeached, and only the second since Andrew Johnson to run for a second term afterward. His answer to that opposition was a simple one on Thursday night: “Always remember: They are coming after me because I am fighting for you.”

The fight is not just political, the president insisted, but one that would affect the lives of Americans everywhere.

Republicans have done their best to define the election as one of “law and order” versus anarchy, a not surprising development given that the fifth-most important issue to voters, according to a recent Pew Research study, is violent crime. According to that survey, 59% listed it as “very important” to earning their vote. The coronavirus, by comparison, ranked fourth.

And so Trump described November’s vote as an existential one about the fate of the nation. “Your vote will decide whether we protect law-abiding Americans or whether we give free rein to violent anarchists, agitators, and criminals who threaten our citizens,” he said. Life as we know it in America is on the ballot, he argued, and the election will determine whether it endures “or if we allow a radical movement to completely dismantle and destroy it.”

Months of violent protests across the country have provided Republicans with a convenient backdrop. Yes, Trump is president, they argue, but Democrats have been in control of cities like Portland and Seattle — where the disorder has been greatest — for decades. Make Biden president, Trump argued, and the violence will spread.

“If the radical left takes power, they will apply their disastrous policies to every city, town, and suburb in America,” he said. “Just imagine if the so-called peaceful demonstrators in the streets were in charge of every lever of power in the U.S. government.”

The speechwriters who crafted his address loaded it with references to great moments in American history: The American Revolution, the triumph over fascism during World War II, and the space race to the moon. Trump dutifully stuck to the script — a rarity for him. He also heightened the drama of the moment:

“This is the most important election in the history of our country. This election will decide whether we save the American Dream or whether we allow a socialist agenda to demolish our cherished destiny.”

Trump has trampled numerous norms during his time in office, perhaps none as blatant as his decision to host a convention speech on the grounds of the White House, the first time since Franklin Roosevelt’s 1940 acceptance of the Democratic nomination at the presidential residence. But norm-busting is in Trump’s nature; the status quo, with all its political niceties and elite traditions, he argued, has not delivered results for everyday Americans.

And though the incumbent, Trump tried to paint himself as the insurgent. He insisted that his administration has “spent the last four years reversing the damage Joe Biden inflicted over the last 47 years.” Policies that needed to be undone included, according to Trump, disastrous trade deals, military adventurism abroad and over-criminalization that had kept tens of thousands behind bars for too long. All of this was included in a speech that stretched more than 70 minutes.

He ended with references to Normandy and Gettysburg. He insisted that Americans could overcome their current challenges just as previous generations had overcome theirs. “For America, nothing is impossible,” Trump said.

“Over the next four years, we will prove worthy of this magnificent legacy. We will reach stunning new heights. And we will show the world that, for America, no dream is beyond our reach,” he promised.

And then there were fireworks, some of them spelling out “TRUMP” and others exploding to read “2020,” as an opera tenor standing on the steps of the South Portico belted out “Ave Maria.” It was a dramatic end to a show pared down as a COVID precaution. But those were not the only explosions of the night.

When the guests filed out of the White House grounds, they were met by the protesters. The latter screamed and yelled at the president’s supporters. One captured on camera by a reporter greeted an elderly couple with two middle fingers. At one point, Kentucky Sen. Rand Paul and his wife were surrounded by demonstrators and police had to intervene, and later in the night the demonstration turned violent as police and protesters traded blows.

Texas Sen. Ted Cruz, the runner-up in the last Republican presidential primary, saw it as a chance to make a closing argument on behalf or Trump. The misbehavior, he said, reflected “Joe Biden’s America.”

There’s a Strange Glow in The Centre of Our Galaxy, And It’s Not What We Thought It Was

Walmart expresses interest in TikTok, teaming up with Microsoft

Samsung moves to autoblock spam calls, but only on its top-end phones

In Security Council, Secretary-General calls for immediate end to Israeli-Palestine…