Ravens not happy with Steelers’ delay tactics before halftime 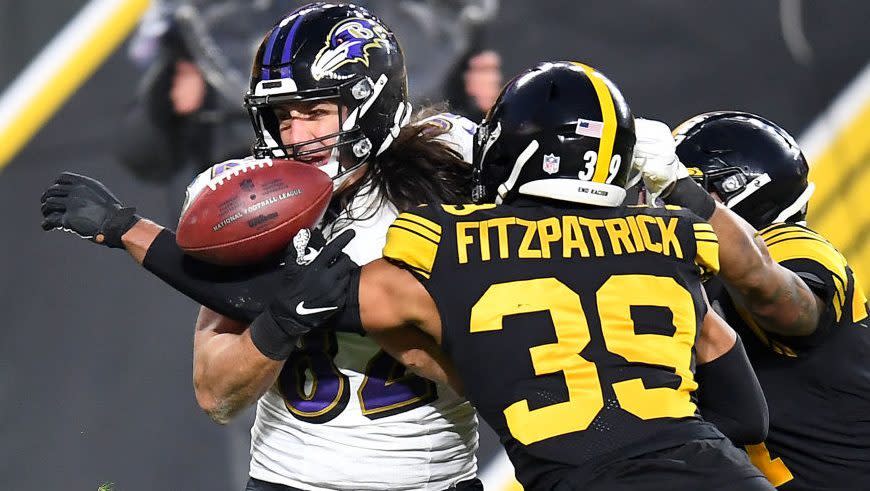 The first half of Wednesday’s Ravens-Steelers game ended with Baltimore running out of time as a third-and-goal pass into the end zone fell incomplete. The Ravens may have had enough time to run a fourth-and-goal play, if not for the Steelers’ tactics as the clock was running late in the half.

With the Ravens out of timeouts and the ball at the 1-yard line, Baltimore plunged into the line and was stopped on second-and-goal. There should have been enough time for the Ravens to run two more plays, but Steelers players purposely stayed on top of Ravens players in the pile, keeping them from lining up until about 18 seconds had run off the clock and there was only enough time for one more play.

Former NFL referee Terry McAulay said on the NBC broadcast that the Steelers should have been flagged for delay of game, but the officials let them get away with it.

Ravens coach John Harbaugh was not happy about it.

“We knew we had enough time to run the two plays we wanted to run; the run, we hoped it would score,” Harbaugh said, via the Baltimore Sun. “If it didn’t, we had a quick play pass that would be operated quick. That would be a quick throw, so we’d have time for timeout if that was incomplete. I just feel like if you’re laying on the ground like that, you’re either injured, or it’s delay of game. So, that’s [a] pretty clear cut-type of a deal, and that’s how we felt about it.”

Ravens quarterback Robert Griffin III said the Steelers were staying on the pile on purpose, but he also blamed himself.

“The problem was the clock was running down as they were just laying on top of our guys, not letting them get up. So, we got the play off,” he said. “We had a plan to run that second play, and it was wide open. So, we just didn’t finish. We just didn’t finish the execution of it; I put that on me. I could’ve thrown a better ball and made it easier. At the end of the day, hindsight is 20/20. In that moment, we had two plays called. We knew what we were going to do, and we got them both run. We just didn’t execute them.”

The Ravens narrowly missed an opportunity to score seven points before halftime in a game they lost 19-14.

Hope for women with the ‘Angelina Jolie’ gene

Inflatable implant injected into the spine could relieve chronic pain

The best places in Europe for remote working

Recap: Who’s responsible if a self-driving car has an accident?

Researchers find three immunotherapy drugs given together can eliminate pancreatic…