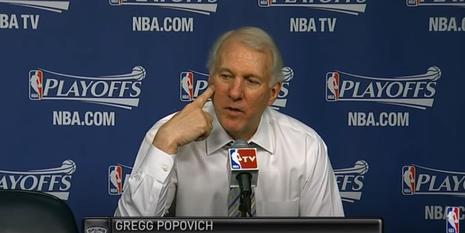 During a video conference with reporters Wednesday from the NBA “Bubble” at Disney World in Orlando, Popovich blathered away, not about the NBA’s impending return, but by venturing down political lane.

“We’ve been all over the map in Texas. Nobody knows what the hell is going on,” Popovich (seen above in file photo) said. .

The Texas response to the pandemic is all about politics, Popovich said, “It’s all about what’s good for them. And ‘them’ means Trump. Because they’re all cowards and they’re all afraid.”

John C. Moritz, from the Austin Bureau of the USA Today Network, writes that Popovich said Gov. Abbott is vacillating in his efforts to slow the spread of COVID-19 in Texas. Lt. Gov. Patrick is accused of undermining the efforts of Dr. Anthony Fauci, director of the National Institute of Allergy and Infectious Diseases:

“The governor goes back and forth based on whether he has to satisfy Trump or listen to the numbers. Politics show maybe he better do this because the virus has done that. But no overall policy, no principle. It’s all about politics.”

Appearing recently on Fox News, Patrick said Dr. Fauci “doesn’t know what he’s talking about” and “has been wrong every time on every issue.”

“We have a lieutenant governor who decided he doesn’t want to listen to [Anthony] Fauci and those people any more. That makes a lot of sense. How safe can that be? The messaging is ridiculous.”

Moritz didn’t tell the whole story though. Nor did he include Lt. Gov. Patrick’s entire statement about the coronavirus. Patrick talked about individual states knowing what’s best for them, as opposed to centralized government dictating one size that fits all states. A story on The Hill by Morgan Gstalter did include the whole quote:

Though Texas is catching a lot of heat from the media for re-opening and a surge in COVID19 cases and deaths, the state has one of the nation’s lowest per capita death rates with 13.

Since his team’s losing ways went on hold with the suspension of the NBA season in March, Popovich has been popping off a lot. He’s one of the NBA’s leading social commentary go-to guys and recently said: “Our country is in trouble and the basic reason is race.” He’s also “embarrassed to be a white person.”

While speaking to the reporters on the video call, Popovich wore a shirt that read: “Vote — Your Life Depends On It.” He definitely won’t be voting for the Trump-Pence ticket.

More car shoppers are thinking about EVs, but still holding back

What’s different about the 2020 Census?

Japan to bar entry of foreigners in response to omicron variant