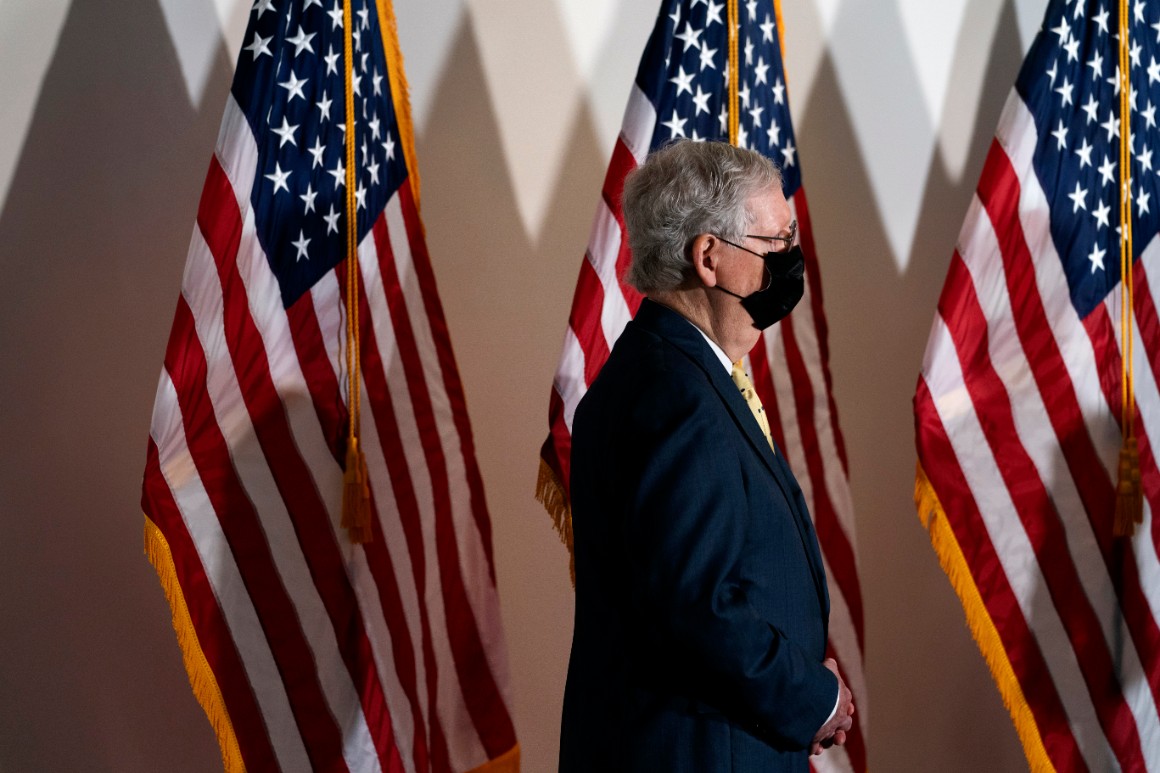 With the November elections just weeks away, the Senate will vote Thursday on a scaled-down Republican coronavirus relief proposal that may prove the last chance for Congress to address the crisis before voters head to the polls.

While the GOP proposal almost certainly won’t receive the 60 votes needed to move forward in the Senate, Republican leaders are hoping to get at least 51 votes for the package in an effort to show party unity and pressure Democrats. Senate Democrats have dismissed the $ 500 billion proposal as nothing more than a political stunt and are urging Majority Leader Mitch McConnell (R-Ky.) and the White House to take much more aggressive steps to address the economic and public-health problems caused by the pandemic.

The Republican initiative comes as talks between the White House and Democratic leadership remain at an impasse. Treasury Secretary Steven Mnuchin, one of the White House’s chief negotiators, cast doubt this week on whether Congress would pass another coronavirus relief package and instead seemed focused on making sure that federal agencies remain open past Sept. 30.

The stakes are high for both parties, with the November election less than 60 days away and only a short window left before lawmakers go home for a final stretch of campaigning. Meanwhile, hundreds of Americans continue to die each day from the virus while the U.S. economy remains moribund.

“We’re going to vote on policy,” McConnell said Thursday ahead of the vote. “Today every senator will either say they want to send families the relief we can agree to or they can send families nothing. Nothing.”

Senate Minority Leader Chuck Schumer (D-N.Y.) shot back, dismissing the vote as “pointless” and nothing more than a partisan exercise.

“Mr. Leader, go look up in the dictionary what bipartisanship is. It’s both parties working together,” Schumer said. “This bill is not going to happen because it is so emaciated, so filled with poison pills, so partisanly designed. It was designed to fail.”

The House returns to Washington next week, but it’s unclear whether stalled negotiations between Mnuchin, Speaker Nancy Pelosi (D-Calif.) and Schumer will resume. Republicans are hoping that Pelosi will face pressure from moderate House Democrats to make new concessions.

But so far, Pelosi and Schumer are showing no signs of coming down from her price tag of $ 2.2 trillion, a key sticking point with the White House and Senate Republicans. The White House initially proposed a topline number of $ 1 trillion for a new relief package, but Mnuchin signaled this week the administration is willing to go up to $ 1.5 trillion.

The Senate Republican proposal being voted on Thursday would provide $ 300-per-week in increased federal unemployment benefits through the end of December, another round of funding for the Paycheck Protection Program and liability protections for schools, businesses and health care providers during the pandemic, a top priority for McConnell.

While the GOP proposal is largely symbolic, it took weeks for Republicans to unify around a single plan. McConnell and Senate Republican leaders introduced the $ 1 trillion HEALS Act in July, but a large faction of GOP senators opposed that bill, citing the federal deficit. Thursday’s bill includes some provisions from the HEALS Act, but is estimated to cost closer to $ 500 billion.

McConnell faces pressure from vulnerable Senate Republicans, who don’t want to go home without voting on another relief package. Schumer, though, this week derided the GOP proposal as nothing more than a “check the box” vote to give cover to Republican incumbents.

Democrats are pushing for McConnell to let the Senate take up the House’s nearly $ 3.5 trillion HEROES Act, which would provide $ 600 in boosted weekly unemployment benefits, another round of stimulus checks, and nearly $ 1 trillion for state and local aid.

Dropped emissions during COVID-19 lockdown will do ‘nothing’ for climate…

Should schools and employers mandate COVID vaccination? Americans come down on one…

Everything Apple announced at its Sept. 14 ‘California Streaming’ event

Rob Reiner Unravels Over Election: ‘Whether We Live Or Die Depends On Our Vote’

Should we screen all adolescent girls and women for anxiety?