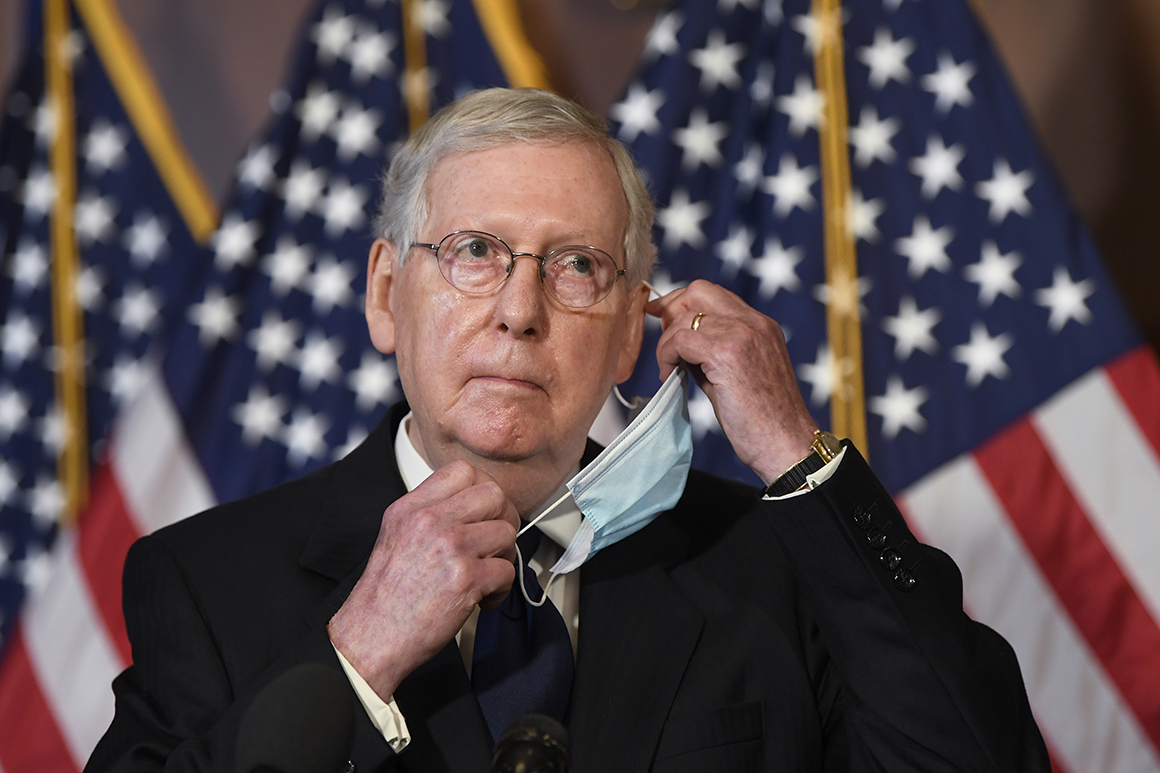 Mitch McConnell listens to a question during a news conference on Capitol Hill in Washington, Monday, July 27, 2020. | AP Photo/Susan Walsh

Here’s what’s in the Senate’s bill on health care:

Senate Republicans are pitching a $ 25 billion boost to a hospital bailout fund, bringing the total to $ 200 billion when combined with past relief measures. That’s well short of the $ 100 billion infusion the industry has demanded — and that Democrats provided in their relief bill, which passed largely along party lines in May. The full funding request could be a hard sell on Capitol Hill, with the pace of elective procedures picking up again and some for-profit hospitals reporting larger earnings than expected. There’s also still money left from a previous bailout.

No additional dollars for Medicaid

Republicans decided against boosting federal funds for the safety net program, despite bipartisan calls from governors warning they’ll have to cut benefits without more federal help.

Congress in March approved a temporary 6.2 percentage point increase in federal matching dollars to state Medicaid programs. Governors and health care groups have urged Congress to bump up the match rate to at least 12 percentage points, while the House bill had raised it to 14 percentage points.

States already grappling with severe budget crunches have begun to curtail spending on their programs, though they’re barred from cutting back enrollment while they’re receiving the enhanced funds.

Testing funding makes it in

More dollars for coronavirus testing had appeared in jeopardy after the White House pushed Republicans to zero out funding. But as testing delays grew, Republicans rejected the demand and are including $ 16 billion more for testing, contact tracing and surveillance. Combined with money left over from previous relief packages, there would be $ 25 billion available for the public health measures. However, that number is well short of the $ 75 billion Democrats have pitched for those efforts.

A boost for virtual care

The pandemic’s telehealth boom would live on. The legislation would allow the Department of Health and Human Services to continue expansive telehealth policies through at least the end of 2021. And for federally qualified health centers and rural health clinics, those policies can be extended for another five years after the coronavirus emergency ends.

Some telehealth advocates have been urging Congress to make more permanent changes to telehealth coverage in the newest relief package. But it appears lawmakers don’t want to commit to more sweeping changes until they’ve done further review of the technology, which took off practically overnight as lockdown measures went into place.

Hospitals get protection from malpractice lawsuits

Coronavirus-related liability protections were a top priority for Senate Majority Leader Mitch McConnell as well as hospitals. The bill would broadly shield hospitals and medical professionals from malpractice lawsuits around Covid-19, while capping damages. Hospital groups say legal risks have been a major barrier to resuming elective surgeries.

Hospitals and physicians would also get more time to pay back Medicare for loans they’ve received to keep their doors open. Some hospital and physician groups have begged for total forgiveness of these loans, which have totaled more than $ 100 billion and are separate from the bailout funds Congress provided. Others have said they need more time to repay the government as they deal with the financial strain from Covid-19. The Senate package would give them a few more months to start repaying the loans on Jan. 1.

Svalbard, Home of The ‘Doomsday’ Vault, Just Recorded Its Highest Ever Temperature

Yes Sir, I Can Boogie Singer Mara Mendiola Dies at 69

You “Cubicle Copied” Your Retirement Plan? Yikes! Why That’s a Big…

The Largest Iceberg in The World Just Broke Off From Antarctica, And Is Floating Away

Earliest Childhood Memories Can Go Back Even Further

Nervous About Meeting Employees in Person for the First Time? Try These 5 Tips

Dutch To Cull 200,000 Chickens After Bird Flu Detected In East Of Country

More Than a Tomahawk: Whats the Deal With Russias Kalibr Cruise Missile?