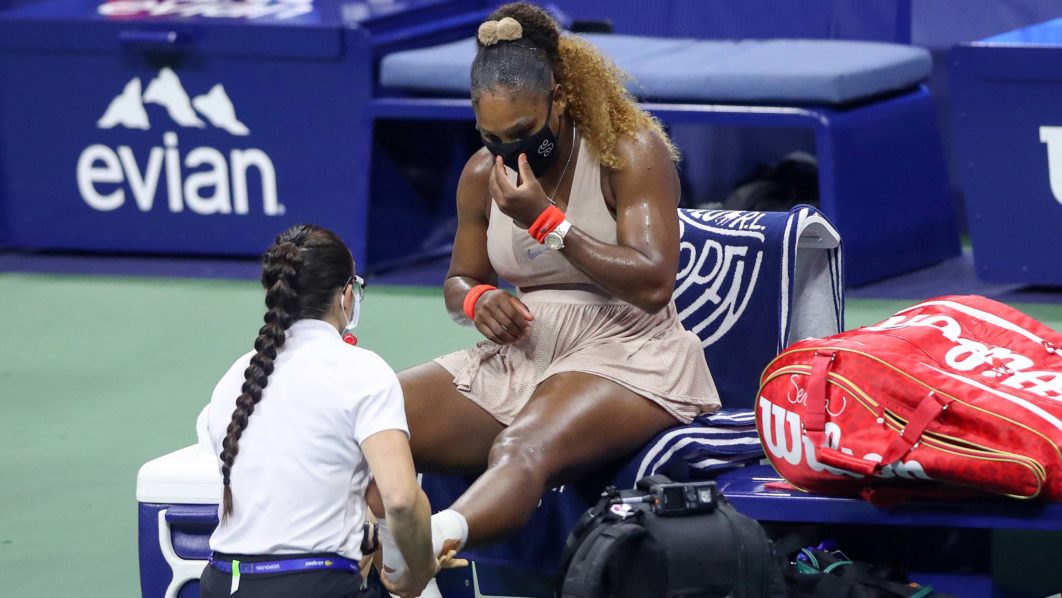 (FILES) In this file photo taken on September 10, 2020, Serena Williams of the US has her ankle retaped in the third set during her Women’s Singles semifinal match against Victoria Azarenka of Belarus on Day Eleven of the 2020 US Open in the Queens borough of New York City. – Williams withdrew from the WTA clay-court tournament that begins on September 14, 2020, in Rome due to a left Achilles tendon injury sustained in her US Open semi-final defeat, the tour announced September 12. Williams, chasing her record-tying 24th Grand Slam single crown, lost to Azarenka in three sets on September 10, on the Arthur Ashe Stadium hardcourt. (Photo by MATTHEW STOCKMAN / GETTY IMAGES NORTH AMERICA / AFP)

The former world number one, a four-time Rome champion, joins 2019 US Open winner Bianca Andreescu and two-time Wimbledon winner Petra Kvitova is skipping the tuneup for the French Open, which begins on September 27.

“I regretfully must withdraw from the Internazionali BNL d’Italia due to an Achilles strain,” Williams said in a statement. “I’m so humbled by the continuous support from my fans in Rome and I look forward to making my return soon.”

Williams took a medical timeout in her New York loss to have the Achilles injury treated.

“I just was stretching,” she said after the match. “I ran for a shot, and off that first step that I took, it was a long point. It wasn’t my ankle, it was actually my Achilles. It just overstretched. It was pretty intense. Then that was that.”

Top-ranked Ashleigh Barty withdrew from Rome earlier in the week, the Australian star saying she woul shut down her season due to coronavirus concerns and travel restrictions.

Matthew Crawford on Why We Drive

Behind the Brand with Katy Milkman

Trump Has Been Fever-Free For More Than Four Days: White House Physician

Take $40 off the new iPad mini in rare preorder sale