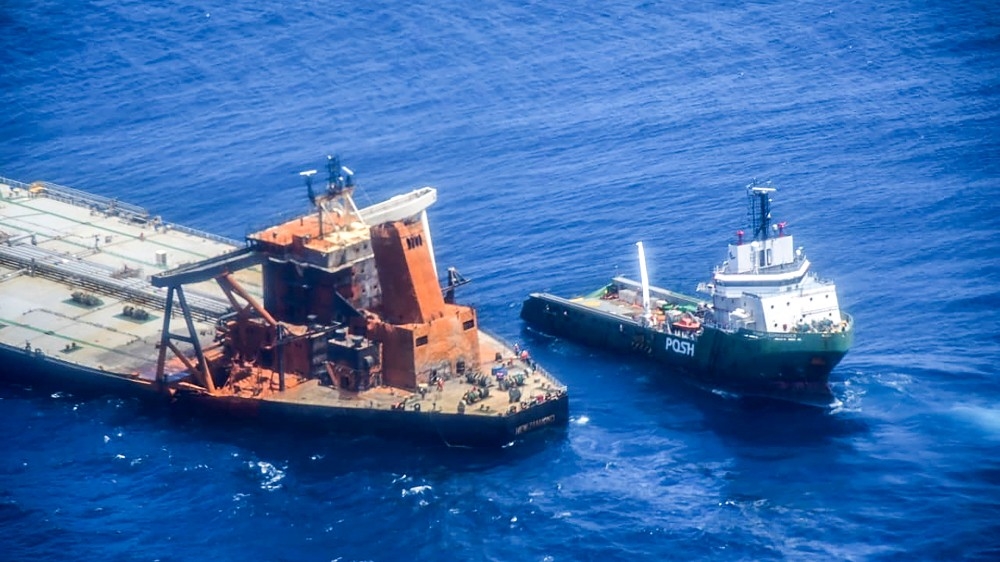 Sri Lanka’s navy says its divers have fixed a fuel leak from the engine of a fire-damaged oil tanker off the island’s east coast, in a salvage operation after the huge week-long blaze.

While the navy on Saturday said no crude oil has escaped the cargo of the New Diamond, leaked diesel fuel had created a two-kilometre-long slick in the Indian Ocean.

The fuel was seeping into the water through damaged pipes connected to a ballast water intake on the ship’s starboard side, according to a navy statement.

That leak was plugged on Friday along with an inlet on the port side of the Panama-registered tanker, it said.

Dutch salvage company SMIT said its experts had boarded the crippled vessel and found the 270,000-tonne crude oil cargo unaffected by the fire.

“The cargo tanks with the crude are intact,” the firm told AFP news agency in The Hague on Friday. “Discussions are ongoing on the destination of the vessel to transfer the crude.”

The Greek-owned tanker, which is carrying about two million barrels of oil, caught fire on September 3 and is currently 45 nautical miles (83 km) off Sri Lanka’s east coast.

Sri Lanka’s environmental authorities fear a marine disaster if the tanker is allowed to transfer its oil to another ship in the country’s waters.

The fire was completely doused on Wednesday, but an unspecified amount of the ship’s 1,700 tonnes of fuel leaked when storage tanks ruptured in the blaze that destroyed the engine room and much of the vessel’s structure.

“The Sri Lankan navy, the Indian Coast Guard (ICG) and tug boats that were involved in fire-fighting are still in the area,” the navy said.

It added that an Indian aircraft used to spray chemicals to disperse the diesel slick in the past two days was on standby.

Sri Lanka has asked the ship’s owners to tow it away from the country’s exclusive economic zone, 370km (231 miles) from its coast.

Sri Lankan authorities are seeking to avoid damage to the coastline like that suffered by Mauritius after a Japanese bulk carrier, MV Wakashio, struck a coral reef off the Indian Ocean island on July 25 and began spilling oil on August 6.

Sri Lanka‘s Marine Environment Protection Authority has said it plans to take action against the ship’s owner under the country’s laws to protect the marine ecosystem.

The New Diamond issued a distress signal a week ago while passing Sri Lanka on its way to the northeast Indian port of Paradip when a boiler exploded, killing a Filipino crewman. The remaining 22 crew were rescued.

The large crude carrier was chartered by the Indian Oil Corporation to import oil from Kuwait to a refinery in Paradip.

Physicists Just Accidentally Made a New Discovery About Black Holes

Talking Point: What Are You Playing This Weekend? (September 26th)