St. Louis Home Defender: The Media Is Siding With the ‘Marxist’ BLM ‘Mob’ 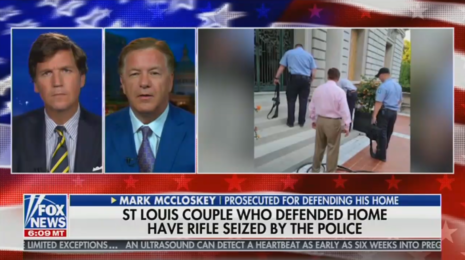 In a follow-up appearance on Fox News Channel’s Tucker Carlson Tonight on Monday, St. Louis lawyer and home defender Mark McCloskey called out the liberal media and CNN’s Chris “Fredo” Cuomo for siding with the “Marxist” Black Lives Matter “mob” over the lives and property of him and his wife. It was an interview his lawyer advised him not to do, but his message was true.
“Aside from being outraged at the city’s leftist district attorney for targeting his guest for gun confiscation and possible prosecution, FNC host Tucker Carlson also wanted to look at how the media were abusing them.”
“Watch CNN’s resident bodybuilder explain the new standard,” Carlson said, noting the left was working to make it unacceptable to defend yourself from an attacker. And speaking of Fredo, Carlson astutely reminded his viewers to “Keep in mind as you watch, that the guy doing the lecturing in this tape has repeatedly threatened violence against others for invading his personal space. But he gets to do that. His brother is the governor.” –Newsbusters

Amphibious Ready Groups: The Navy’s Plan for a Pacific Counterpunch

Airlines Down On Knees Pleading For Help From Passengers

Coronavirus: Study by team including Winnipeg-trained scientist could be key to…