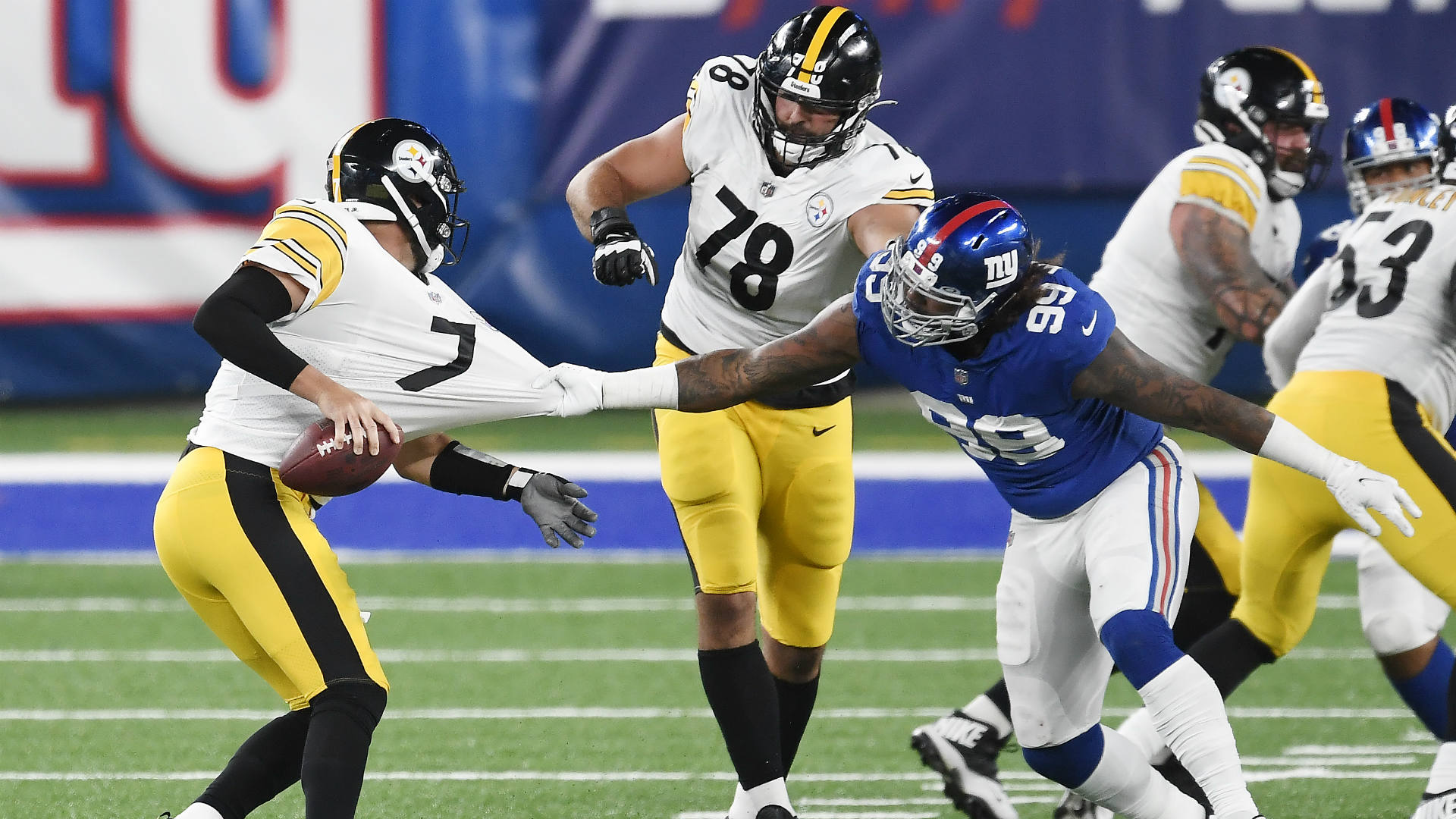 In the Steelers’ opening game of the 2020 season, offensive coordinator Randy Fichtner did a far better job of disguising himself than most of his early play calls.

He had been ordered by the NFL, along with all sideline personnel in all games, to wear a face covering to help prevent the spread of COVID-19. He showed up along the Steelers’ bench for Monday night’s game against the Giants with his head wrapped in a scarf that looked, in the words of Steelers fan Chris Vee, like he’d gotten his wisdom teeth removed earlier in the day.

The scarf was wrapped around Fichtner’s ears but covered neither his nose nor his mouth, which meant it was not effective in preventing the spread of anything — including the still-dreadful play calls that failed to make much of an impact on the Giants’ defense and risked the health of the team’s star quarterback in his first game in 365 days.

While Ben Roethlisberger missed 90 percent of 2019 with an injured elbow, the Steelers replaced him with two quarterbacks who entered the season with zero NFL snaps between them. It looked for a while against the Giants as though their coaches had become nostalgic for those days.

“We didn’t start with great fluidity on offense,” coach Mike Tomlin told reporters after the game, but he left room to infer that it was a matter of execution rather than scheme. It was a little of the former, a ton of the latter.

Tomlin did acknowledge that the offense finally found its voice in a two-minute drill at the end of the first half that helped fuel their 26-16 victory, an indication that the attack worked better in the hands of the quarterback than the offensive coordinator.

Emphasizing first-down runs has become a dubious strategy in the NFL. With the speed of linebackers improving and the size of defensive linemen increasing, it has become extremely difficult merely to line up and shove one’s way to a successful running game. An analysis of the 2018 season by FiveThirtyEight.com showed that first-down passes yielded five or more yards 47 percent of the time, compared with just 32.8 percent on first-down runs.

When the Steelers were operating a year behind Mason Rudolph or Duck Hodges, it made sense to remain relatively conservative on offense because the exceptional defense kept them in the playoff hunt until the season’s final week. Getting back Roethlisberger meant they would not be as restricted, and yet they handcuffed themselves.

The Giants were desperate at cornerback. After 2019’s first-round pick, DeAndre Baker, was arrested on robbery charges and waived by the team, New York wound up starting Corey Ballentine, who was chosen by the Giants five rounds later the same year. This seemed not to influence Pittsburgh’s gameplan at all, as it endeavored more to establish the run than to move the football or protect its most valuable asset.

Until they found themselves with possession of the ball at their own 22 with 92 seconds left in the half, the Steelers called nine first-down plays. Of those, six were runs and two were short passes to running backs. There were no quick throws to loosen the defense. There was one attempt at a deep ball that led to Roethlisberger being sacked.

As a result, he found himself in seven third-down situations, only one of which was shorter than five yards. The average down and distance in those situations: 3rd and 6.

MORE: 10 interesting facts from Week 1 of the NFL

He was sacked twice, albeit one of those on a second-half pass attempt that saw him hold the ball long after the play’s expiration date. He was hit often, including an early blitz that freed corner Darnay Holmes to knock down Roethlisberger. He was pulled down by linebacker Lorenzo Carter on a successful third-and-long pass to JuJu Smith-Schuster. The QB got up limping, trying to shake loose discomfort in his left knee. He was slammed by 300-pound lineman Leonard Williams on the last third-down attempt of the opening quarter.

At one point, backup Mason Rudolph warmed up on the sideline, although Roethlisberger never missed a snap and told reporters, “I feel great right now.”

One imagines he felt less well upon getting out of bed Tuesday morning. And watching the film of the game’s first 35 minutes won’t provide any relief.

How to Use Digital Touch in Messages on iPhone & iPad to Send Heartbeats,…

How to format a thumb drive for both Mac and Windows

11 Best Things To Do In Puerto Rico

Ep 194: Aligning Values To Clients With Sustainable Investing And Becoming B Corp…

DeFi and its two core attributes

First Doses First, coming soon to a state near you…

The Holocaust as civilizational rupture?