Tens of thousands of demonstrators in Russia’s far eastern city of Khabarovsk have taken to the streets, protesting against the arrest of the region’s governor on charges of involvement in multiple murders.

Khabarovsk’s Governor Sergey Furgal was arrested two weeks ago and flown to Moscow where he was put in jail for two months.

The huge rallies in the city of Khabarovsk on the border with China present a growing concern for the Kremlin, observers say, and come after President Vladimir Putin this month oversaw a controversial vote that allows him to extend his hold on power until 2036.

It is the second large-scale protest in the region over the past seven days, following on from a rally in the city centre last Saturday. 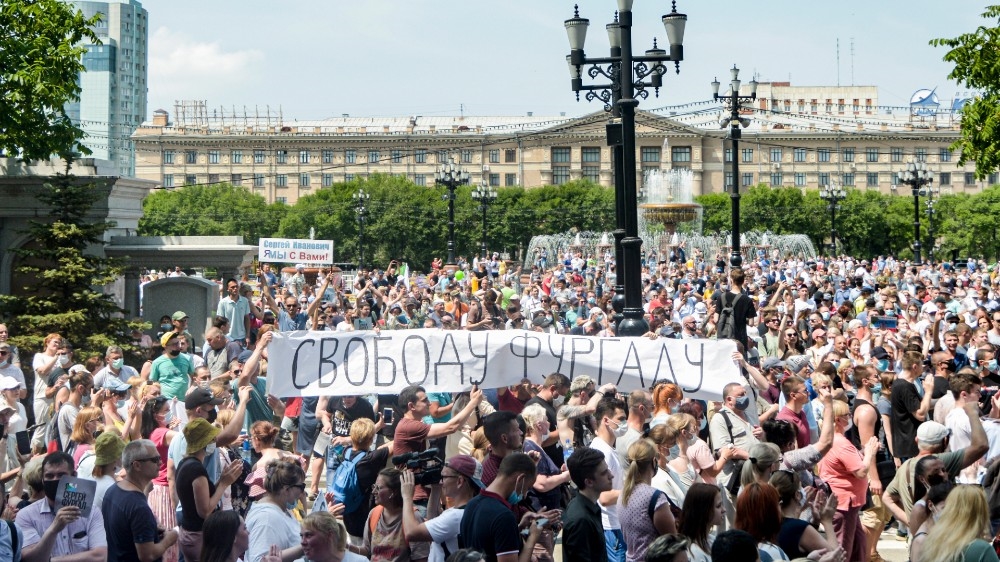 People hold a banner reading ‘Freedom for Furgal’ during a rally in support of Sergei Furgal, governor of Khabarovsk region who was arrested a week ago [Aleksandr Yanyshev/AFP]

Both demonstrations are reported to be the largest in the history of Khabarovsk, a city with a population of 590,000.

While many expressed support for the arrested politician, some of the protest signs and chants were distinctly anti-Putin.

Smaller rallies also took place in nearby cities and towns including Komsomolsk-on-Amur and Amursk and the Pacific port of Vladivostok in next-door Primorsky Krai region.

In rallies that lasted several hours, the crowds also massed outside the building housing the regional administration, chanting “Freedom!”

Protesters carried placards reading “Freedom for Furgal!” and cried out “As long as we are united, we are invincible”, as passing cars honked horns in support.

Demonstrators praised the arrested governor, saying he has done a lot for the region over the past two years.

“I am defending him because I am fond of him,” said Anatoly Svechin, a 49-year-old Cossack, a member of the paramilitary group traditionally loyal to the Kremlin.

Another protester, Gennady Vasin, called the governor’s detention an example of “political arbitrariness”.

“We don’t want Sergei Ivanovich to be taken away,” said Gennady Yakovlev, using Furgal’s first name and patronymic. “We need him, we elected him.” 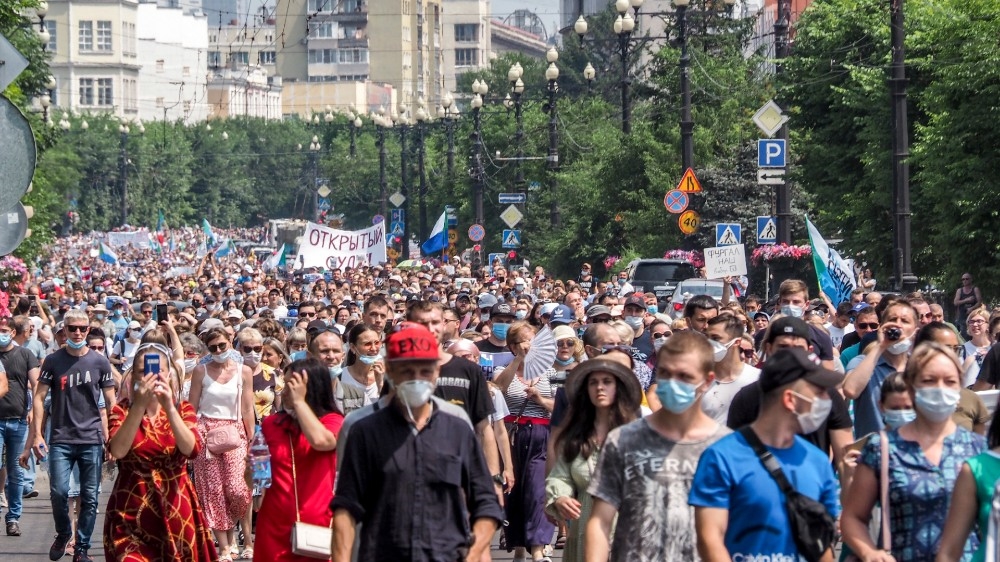 Many of the protesters say the charges are politically motivated and question why investigators waited so long to accuse a public official who should have undergone background checks.

Investigators say Furgal organised the murders of several businessmen in the Far East in 2004 and 2005.

The protesters called for a “fair trial” for the governor, and not in Moscow, where he is being held since his arrest.

“He’s our governor! And we will defend him,” they shouted.

As with previous protests, the rally was not approved by the authorities, but police made no moves to disperse it.

Russia’s main opposition leader Alexei Navalny cheered the protests and posted a message on social media site Instagram heralding the city of Khabarovsk for refusing to “believe Putin’s endless lies about the ‘justice’ of his courts and the ‘honesty’ of his elections”.

‘For 90 minutes, you have to be a bunch of c****’ – Astonishing moment Jose Mourinho tells Tottenham players to get nasty in leaked Amazon documentary footage

South Africa’s Covid cases DOUBLE in a day as test positivity climbs to 16.5%

Should America (and FIFA) Pay Reparations?

Rancor Between Scientists and Trump Grows

Piece of the puzzle: 24 y/o could partially replace what Dembele sale took from Spurs…