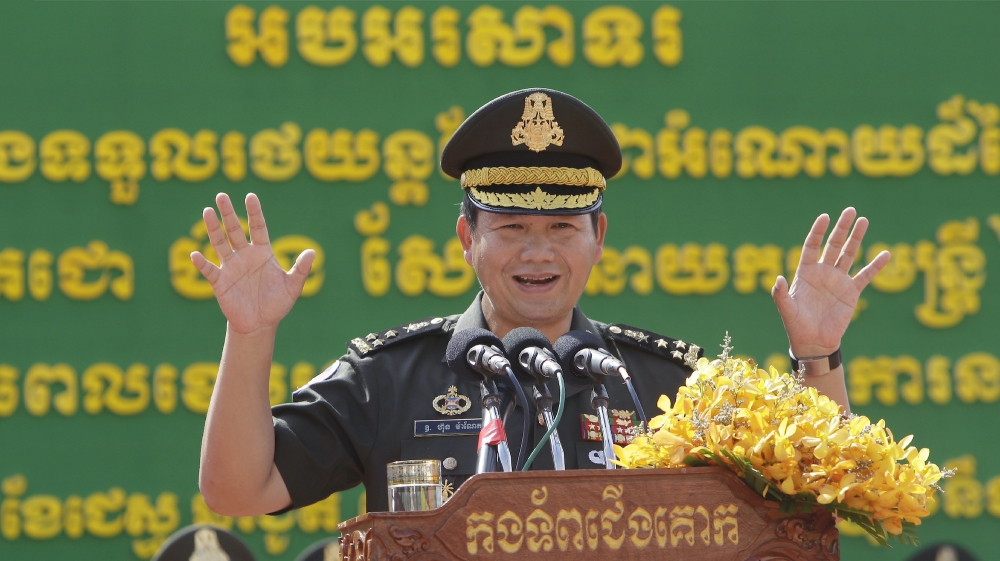 Late last month Cambodian journalist Ros Sokhet, who is the publisher of the privately-owned Khmer Nation newspaper, was arrested for allegedly committing “incitement to provoke serious chaos in social security”. After being questioned at the Cybercrime Bureau of the Phnom Penh Municipal Police for two days, he was charged with incitement to commit a felony, an offence which carries a maximum penalty of two years’ imprisonment.

According to local media reports, Sokhet was targeted over a social media post in which he criticised Cambodia’s Prime Minister Hun Sen for grooming his eldest son, Hun Manet, to take over the leadership of the country after his retirement.

Despite Cambodian security forces’ apparent attempt to silence Sokhet, Hun Sen’s plan to nominate his son to be the country’s next leader is no secret to anyone watching Cambodian politics closely.

On June 22, the prime minister himself confirmed that he was grooming his 43-year-old son to take over the leadership of his ruling Cambodian People’s Party (CPP) and consequently, the country.

“As his father, I have to support my son and train him so that he is capable [to take over the leadership],” Hun Sen said. “Even if he cannot be like his father, at least his capacity should match that of his father by 80 or 90 percent.”

Hun Sen, who has been leading Cambodia since 1985, did not decide to create a political dynasty overnight. He has been carefully preparing his eldest son for leadership, for decades.

Hun Sen arranged for his son to receive an education in the US and the UK that would benefit his future political and military career. Hun Manet received a bachelor’s degree from the United States Military Academy, also known as West Point, in 1999. He went on to complete a master’s degree at New York University in 2002, and a doctorate at the University of Bristol in the UK in 2008. All his degrees were in economics.

When he returned to Cambodia after completing his studies, he was swiftly appointed as the commander of Cambodia’s National Counter-Terrorism Special Forces despite his young age and relative inexperience. In 2013, he earned the rank of lieutenant-general in the Royal Cambodian Armed Forces (RCAF).

His rapid rise through the ranks of Cambodia’s armed forces continued in 2018, when he was appointed as the commander of the RCAF – the second-most powerful position in the kingdom’s army. Since then, the Cambodian people have been watching Hun Manet stand proudly behind his father – the de facto commander-in-chief – at every military parade.

In addition to providing his heir apparent with an exemplary military career, Hun Sen also appointed Hun Manet to the Central Committee of the CPP – the only political party in Cambodia’s parliament after the only meaningful opposition, my own Cambodia National Rescue Party (CNRP), was unconstitionally dissolved in 2017.

Additionally, Hun Manet represents his father as head of the Scholarship Association, which provides support to thousands of students inside Cambodia. He also leads the Association for Medical Doctors, which provides health services to the country’s rural population.

Finally this past June, Hun Sen’s eldest son was elected as President of the CPP’s youth wing. Clothed in blue shirts and the Cambodian scarf known as the krama, the “youthful” CPP force performs charity actions and serves as the party propaganda apparatus set to defend the actions of the Great Leader – Hun Sen.

Through the years, Hun Manet worked hard to maintain his position as the heir apparent and defended his father unconditionally. He came to be known as a “gentle” political force – always respectful of the elderly CPP elites and a “big brother” to their children who also hold prominent positions in the Hun Sen government. By assuming the role of CPP youth wing president, he finally entered the last stage of his decades-long preparation to become Cambodia’s next leader.

But Hun Manet’s unconditional support for his father, and desire to protect him at all costs, already caused him to make a fundamental mistake.

He defended Cambodia’s recent purchase of 290 military trucks from China for $ 20 million. Hun Manet said the government did not use “a single riel” from the national budget to purchase the vehicles, explaining that they were paid for by “Cambodian citizens and companies”. He did not reveal the names of these private donors.

In his full three-star uniform, Hun Manet chastised journalists, opposition members and independent analysts who raised suspicions about the source of the funds that were used to pay for the trucks. He questioned the patriotism of anyone who criticised the government for making such a purchase amid a pandemic that caused millions of Cambodians to lose their sources of income. The deputy commander-in-chief of the Cambodian armed forces proudly acknowledged that his father has the wealth of unnamed private individuals at his service and that he is willing to spend this money as he sees fit, without consulting the public, even in the middle of a public health emergency.

By putting his support behind the controversial move, Hun Manet showed that he has no intention to learn from his father’s mistakes or put the needs and demands of the Cambodian people before his family’s.

Hun Manet may be groomed by his father to take over the reins of the Hun family, and the country, however, there are still some major obstacles on his path to power.

Even though he has the support of his all-powerful father and the party machinery, he still needs to gain the trust and support of Cambodian voters. He especially needs to show the Cambodian youth, 70 percent of whom lack access to quality education and employment with living wages, that he can emerge from his father’s shadow and present a new, more prosperous and democratic vision for Cambodia’s future.

Cambodian youth have demonstrated that they want “change” both in the 2013 general elections and the 2017 communal polls, in which the CPP lost many of its strongholds to CNRP, its main contender.

Silencing of journ
alists like Ros Sokhet, who question the legitimacy of Hun Manet’s grooming for the leadership of Cambodia, will not help his political prospects. To be a legitimate candidate to become Cambodia’s next leader, he needs to show the country that he is able to stand up for what is right, and even criticise the actions of his father, when it is necessary for the wellbeing of his country.

Alice Ball pioneered leprosy treatment and then had her work stolen

10 Easy, Free Ways to Find Peace When You’re Stressed Out