The White House Called a News Conference. Trump Turned It Into a Meandering Monologue. 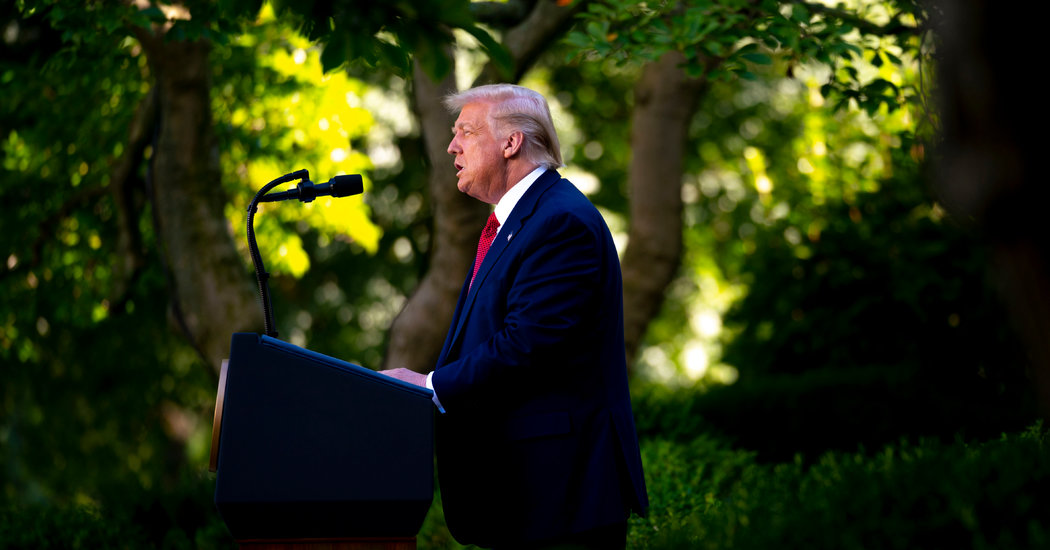 WASHINGTON — In theory, President Trump summoned television cameras to the heat-baked Rose Garden early Tuesday evening to announce new measures against China to punish it for its oppression of Hong Kong. But that did not last long.

What followed instead was an hour of presidential stream of consciousness as Mr. Trump drifted seemingly at random from one topic to another, often in the same run-on sentence. Even for a president who rarely sticks to the script and wanders from thought to thought, it was one of the most rambling performances of his presidency.

“We could go on for days,” he said at one point, and it sounded plausible.

At times, it was hard to understand what he meant. He seemed to suggest that his presumptive Democratic challenger, former Vice President Joseph R. Biden Jr., would get rid of windows if elected and later said that Mr. Biden would “abolish the suburbs.” He complained that Mr. Biden had “gone so far right.” (He meant left.)

Even for those who follow Mr. Trump regularly and understand his shorthand, it became challenging to follow his train of thought.

For instance, in discussing cooperation agreements with Central American countries to stop illegal immigration, he had this to say: “We have great agreements where when Biden and Obama used to bring killers out, they would say don’t bring them back to our country, we don’t want them. Well, we have to, we don’t want them. They wouldn’t take them. Now with us, they take them. Someday, I’ll tell you why. Someday, I’ll tell you why. But they take them and they take them very gladly. They used to bring them out and they wouldn’t even let the airplanes land if they brought them back by airplanes. They wouldn’t let the buses into their country. They said we don’t want them. Said no, but they entered our country illegally and they’re murderers, they’re killers in some cases.”

At another point, he took a jab at Mr. Biden’s mental acuity. “Let him define the word carbon, because he won’t be able to,” Mr. Trump said. That has been a theme of his lately, unsubtly implying that Mr. Biden has grown senile. Just last week, Mr. Trump, 74, boasted that he had recently tak
en a cognitive test and “aced it,” while insisting that Mr. Biden, 77, “couldn’t pass” such an exam.

The disjointed monologue, however, may not have been the most convincing evidence. On Twitter, his critics quickly compared him to a grandfather who had broken into the sherry cabinet. “Trump is a truly sick individual,” wrote Jon Favreau, who was President Barack Obama’s chief speechwriter. Rick Wilson, a founder of the Lincoln Project, a group of anti-Trump Republicans, called it “rambling verbal dysentery.”

The appearance came on the same day that the president’s estranged niece, Mary L. Trump, a clinical psychologist, published a scathing book questioning his mental health and asserting that pathologies stemming from his childhood are playing out now on the world stage. Mr. Trump has not commented about the book, but in the past he has rejected such contentions by describing himself as “a very stable genius.”

The focus of the evening session with reporters took a turn after Mr. Biden received extensive television coverage earlier in the day for his $ 2 trillion climate plan, according to a senior official who spoke on the condition of anonymity. The Hong Kong Autonomy Act, the ostensible reason for his appearance, was treated as an afterthought.

In effect, the news conference turned into a campaign speech to substitute for the one Mr. Trump was scheduled to give last weekend in New Hampshire only to cancel amid concerns about flagging attendance, citing a possible storm at the site of the rally. While presidents as a general rule are not supposed to engage in overt campaigning from the White House itself, Mr. Trump made little effort to disguise his intent as he mentioned Mr. Biden’s name more than 20 times as he spoke in the Rose Garden.

Most of the time, the president paid little attention to the text he seemed to have brought with him, but he eventually read from what he claimed was Mr. Biden’s campaign agenda but was in fact a misleading compilation assembled by his own political advisers.

“Joe Biden’s entire career has been a gift to the Chinese Communist Party,” Mr. Trump declared.

Reading from what he was given, he quoted Mr. Biden. “He said that the idea that China is our competition is really bizarre,” the president said. “He’s really bizarre.”

The appearance came on a day when Mr. Trump seemed eager to challenge convention and, at times, basic facts. During an earlier interview with CBS News, he denied that Black Americans suffered from police brutality more than white Americans.

Statistics show that while more white Americans are killed by the police over all, people of color are killed at higher rates when accounting for population differences. A federal study that examined lethal force used by the police from 2009 to 2012 found that a majority of victims were white, but that Black people were 2.8 times likelier to be killed than white people.

Asked about those who see it as a painful symbol of slavery, he said: “I know people that like the Confederate flag, and they’re not thinking about slavery.”

In a separate interview, with the conservative website Townhall.com, that was published on Tuesday, Mr. Trump falsely claimed that a white couple in St. Louis who confronted peaceful marchers outside their home with guns were on the verge of being attacked. “They were going to be beat up badly, and the house was going to be totally ransacked and probably burned down,” he said.

Video of the episode, which became a flash point in the national debate over racial inequality, showed that the protesters at no point physically threatened the couple.

Mr. Trump’s Rose Garden appearance had its share of false or misleading statements, as well. He complained once again that the rising cases of the coronavirus in the United States were really because of an increase in testing. “If we did half the testing, we’d have half the cases,” he said. He likewise brushed off the death toll of more than 136,000 by saying that he had saved as many as three million people by taking the actions he did.

But he was eager to take on Mr. Biden after weeks of trailing him by double digits in the polls, blaming the former vice president for everything from crumbling highways to closed factories. “Joe Biden is pushing a platform that would demolish the U.S. economy, totally demolish it,” Mr. Trump said.

Mr. Biden, he added, has moved so far to the left that he has “the most extreme platform of any major-party nominee by far in American history.” He cited Mr. Biden’s climate plan to reduce carbon emissions for new homes and offices by 2030. “That basically means no windows,” the president said.

While advertised as a news conference, in fact Mr. Trump took only a few questions, devoting six minutes of the 63-minute event to responding before abruptly cutting it off. But he promised he was not finished: “We will be having these conferences again.”

Living robots: Xenobots made from frog cells can self-replicate in a dish by pulling…

T.I. Claps Back At Troll Who Thinks His Wife Tiny Needs An ‘Entanglement’…

Retailers: Is Your E-Commerce Website Ready for a Sales Surge?

As Trump and China trade hostilities, Southeast Asia is thrust onto the front line

The best Cyber Monday tech and electronics deals, from AirPods to 4K TVs

With Scant Information on Omicron, Biden Turned to Travel…